CORRECTION: This story was updated on Aug. 25, 2015, to correctly indicate Key Organics’ corporate parent. The company is owned by Tennants Consolidated Ltd., not Tennants Fine Chemicals.

With its long sandy beaches and slow pace of life, Cornwall, the isolated southwestern tip of England, is a county that attracts vacationers and repels industry in equal measure. 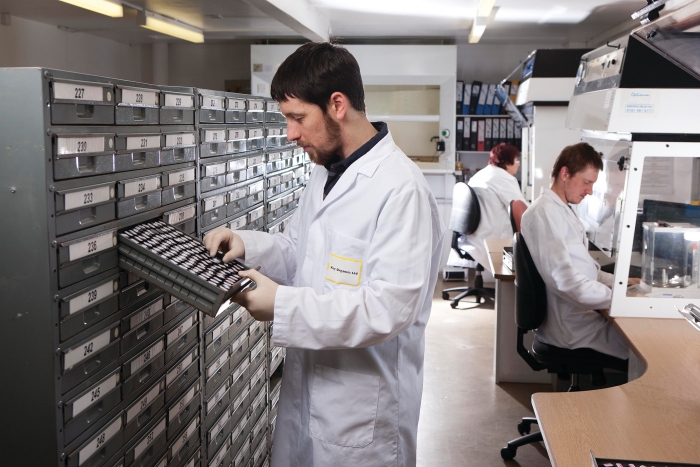 Credit: Key Organics
A researcher at Key Organics’ site in Camelford selects a catalog chemical for a customer.

Camelford, Cornwall-based Key Organics, a privately owned firm providing chemistry services to the pharmaceutical sector, is one of a handful of chemistry enterprises to have established itself in the area and survived. But only just. It went into a financial tailspin between 2008 and 2010 when it was forced to slash its workforce of 125 after some customers shifted their business to low-cost service providers in Asia.

Today, the firm has 32 employees and is hiring again. Sales growth—albeit from a smaller base—has returned. Key Organics’ recovery is being built on custom pharma contracts returning from Asia and an increasingly successful lab chemicals catalog business. If anything, the firm’s Cornish location is proving to be a benefit as it attracts top-caliber chemists drawn to the region by the promise of a better lifestyle.

Improvements to the business got under way in 2012 after Key Organics’ parent company, Tennants Consolidated Ltd., brought in Joe Carey as managing director. A longtime executive in the European pharmaceutical services sector, Carey is a physical organic chemist with a Ph.D. from the University of Oxford and an M.B.A. from the University of Cambridge.

Under Carey, Key Organics has increased its offering of drug molecule fragments, screening compounds, intermediates, and biochemicals under its Bionet catalog business by 50% to about 96,000. It offers a same-day service, sending samples out from labs in Camelford and a Boston warehouse.

The firm plans to increase its offering to more than 100,000 compounds in the next few weeks—and well beyond that in the coming years. In the past month, Key Organics secured agreements to comarket compounds generated by Cancer Research UK and Liverpool ChiroChem.

Intermediate and fragment sales are growing fastest, according to Carey. In the fragments field, Bionet features a central nervous system collection and a “fragments from nature” collection of chiral molecules.

“We have seen a decline in screening compound sales, but this appears to have leveled off, and we see a new focus on therapeutically focused screening collections,” Carey says. Likewise, sales in the agrochemical space have dipped, but the firm’s recent launch of 600 new pyridine fragments for fungicide research “will help kick-start sales,” he adds.

Sales at Key Organics are split evenly between its catalog and chemistry services activities.

Key Organics typically works on 100 custom projects per year. The firm’s custom skill set includes medicinal chemistry through to process R&D and batch production of up to about 5 kg of compounds for nonclinical research.

But the firm’s core base of small and midsized biotech and agrochemical firms looks very different now compared with the years before 2008, when most of its customers were big pharma companies such as Pfizer and Merck & Co.

When those customers started drifting away in 2008, Key Organics was forced to shed almost 100 of its 125 employees.

Some former staffers moved out of the region to pursue their chemistry careers, and others took up local jobs as teachers, says Andrew Lowerson, head of biochemicals, fragments, and screening compounds for the company, and a survivor of the cuts. “We’ve gone through turmoil,” Carey acknowledges.

Tripos Discovery Research, a drug software and chemistry provider based 17 miles away in Bude, didn’t survive the downturn at all. At its peak, Tripos had annual sales of more than $50 million and 165 employees, but it went bust in 2007 after completing a final compound library project for Pfizer. The firm left behind a new $25 million lab that still stands empty.

Still, the market has improved in recent years. “We continue to see that smaller European Union-based biotech companies are more comfortable with locally based contract research organizations,” Carey says.

The Achilles’ heel of Key Organics and other small custom manufacturers, however, is that they can be more exposed to market trends than larger firms, notes industry consultant Jan Ramakers. The good news for such companies, though, is that the number of small Western biotech and pharma companies that might use their services will grow for the foreseeable future, Ramakers says. “If Key Organics can also provide catalog products without incurring too much cost, it’s a worthwhile business to be in,” he adds.

Key Organics is indeed finding that market to be worthwhile. The firm opened the Boston-area office and warehouse for its catalog products in 2014. Its Web-based sales, which are mainly in the U.S., have increased 100% in the past six months.

At about $3 million per year, Key Organics’ sales are a fraction of what they were several years ago. But the firm is debt-free, and growth is returning, particularly in the U.S., where the firm is experiencing 30%-plus annual sales increases, albeit from a small base. Sales in Japan are rising as well.

With sales on the up, Key Organics has been adding chemists. It just recruited a medicinal chemist formerly with Roche and another from Novartis. “They each have a wealth of experience,” Carey says. “We are picking up a lot of people like that.”

“People want to come here because of the lifestyle choice,” Carey says. “I can happily see us getting to 50-plus staff in the next few years if the projects are available. There is no cap on how big we can grow.”

Carey bats away the suggestion that Cornwall is isolated and the wrong place to run a chemical business. Instead, he highlights Key Organics’ growing number of collaborations and the high level of interest among chemists in working at the company. Asked if, given the choice, he would relocate to a thriving biotech hub such as Cambridge or Oxford, Carey doesn’t hesitate. He says he would opt for Cornwall every time.