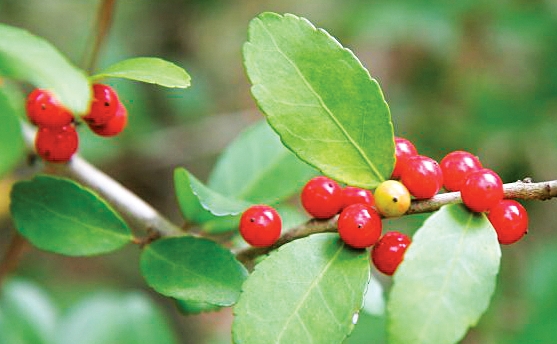 Whether you like caffeinated tea in green, black, white, or oolong form, it all comes from the same plant: Camellia sinensis, an evergreen shrub native to East Asia.

But if you’re in North America, it turns out that you can get a caffeine hit from a source closer to home: an evergreen holly known as yaupon, or Ilex vomitoria, that grows in the southeastern U.S. It’s the region’s only native plant known to produce caffeine.

Yaupon’s unfortunate Latin name comes from the plant’s use in Native American purification rituals, which involved brewing a so-called black drink from dried yaupon leaves possibly combined with herbs. But drinking moderate amounts of a tea made from dried or roasted yaupon leaves on their own has no ill effects, as your humble Newscripts author can attest. To this writer, both a black and a green yaupon tea have a greenish color and taste somewhat similar to C. sinensis green teas.

Most people in the southeastern U.S. see yaupon (pronounced ˈyō-pän) as a “horrible” weed and are stunned to learn that it’s useful for something, says Texas A&M University food chemistry professor Stephen Talcott. He describes yaupon tea as a milder and cleaner-tasting version of yerba maté, I. paraguariensis, which comes from South America.

Talcott studies yaupon for its polyphenolic and flavonol compounds, which may have anti-inflammatory and antioxidant effects (Fitoterapia 2011, DOI: 10.1016/j.fitote.2011.01.013). “It’s an interesting idea from a marketing perspective,” he says. “Instead of drinking imported yerba mate, here’s something grown domestically.”

In another case of research on something commonplace but seemingly understudied, a team at Purdue University is taking a scientific approach to investigating the effects on hair of using a flat iron to straighten curls. 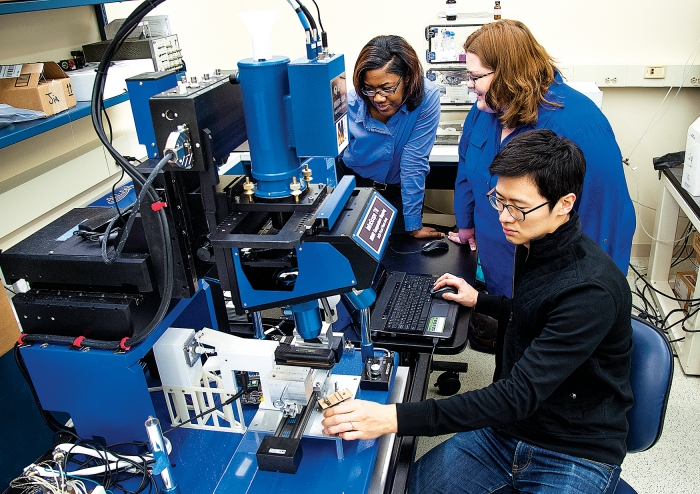 There is little consumer or scientific information in the area, notes Tahira Reid, a mechanical engineering professor who studies design from the perspective of social and cultural needs of customers. The few scientific studies published documenting heat effects on hair primarily used straight or wavy hair, not curly.

Reid and her graduate students partnered with another mechanical engineering professor, Amy Marconnet, to develop a way to experiment with thermal effects on hair. Marconnet’s research generally focuses on heat transfer and energy conversion in materials, including heat conduction through fibers made from carbon nanotubes.

The team built a mount and stage to hold the hair and draw it through a flat iron, which was attached to a motor to open and close it. A high-resolution infrared microscope monitored the temperature distribution on hair samples in real time.

Proof-of-concept studies of hair samples from three volunteers showed that the approach works, and the group has now procured a larger variety of hair types as samples for further experiments. Overall, they hope to identify the thermal properties of the hair, how the hair responds to flat ironing, and the effects of protectant products.

“I’d never even seen a flat iron” before curly-haired Reid approached me with the study idea, says straight-haired Marconnet. “I think it’s a great example of why diversity is needed in engineering. Sometimes you don’t even know a problem exists.”

Neuroscience
Small genetic variations link the activity of odor receptors with the perception of odors
Synthesis
Chemistry in Pictures: Cantina chemistry
Environment
Why bearcats smell like popcorn
Share X
To send an e-mail to multiple recipients, separate e-mail addresses with a comma, semicolon, or both.
Title: HomeGrown Caffeine Fix, A Hairy Investigation
Author: Jyllian Kemsley
Chemical & Engineering News will not share your email address with any other person or company.