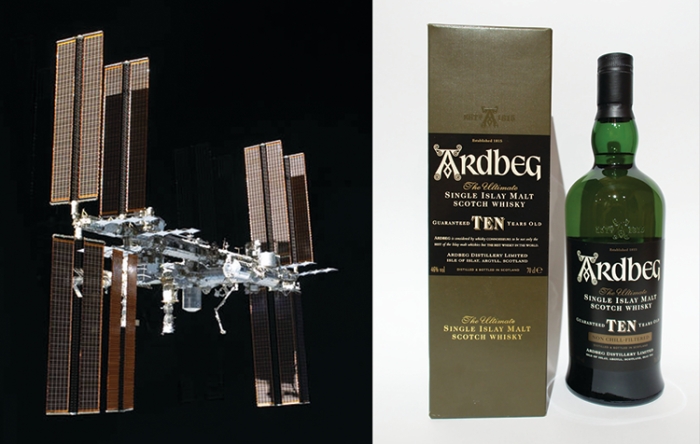 What better way to ponder the gravitas of microgravity than over a dram of fine, space-aged whisky? Last month, the Scottish distillery Ardbeg announced that it has been aging some of its whisky at the International Space Station for the past two-and-a-half years—and that microgravity-aged whisky has a unique taste compared with its Earth-aged counterpart.

Ardbeg’s whisky hitched a ride into space on the Soyuz booster rocket. Because ISS doesn’t have room on board for an entire whisky oak barrel, the distillate traveled in a glass vial. Ardbeg also added some oak shavings in the vial to simulate the oak barrel aging experience. For good measure, the team kept a similar glass vial of young whisky with oak shavings here on Earth, so direct flavor and analytical comparisons could be made.

After 971 days in space, the ISS-aged whisky landed in Kazakhstan’s desert, and samples were delivered to two labs for analysis using gas and liquid chromatography as well as mass spectrometry.

According to a white paper written by Ardbeg’s director of distillation, Bill Lumsden, microgravity does little to alter the chemical profile of whisky volatiles—the odor—but space-aging does impact the liquid’s flavor chemicals. The Earth-aged whisky had much more—nearly double the amount—of some oak-wood-derived molecules, such as vanillin and syringaldehyde, which emerge from the wood’s lignin infrastructure.

“Now that I’ve discovered the new flavors in this liquid, I need to think about how I can introduce some of them into Ardberg whisky here on Earth,” Lumsden said in a promotional video. The Newscripts gang predicts that Ardbeg will try to cash in on the cachet of space-aged whisky, especially among aficionados who don’t have the currency to travel to microgravity themselves.

All this talk of food and empty spaces could make one think of food with empty spaces and specifically the long-standing conundrum about the holes in Swiss cheese, known to foodies as Emmentaler. It’s no mystery that the empty spaces form when fermenting bacteria produce carbon dioxide, but nobody’s known how Swiss cheese gets the size and the number of holes that it has.

[+]Enlarge
Credit: Shutterstock
A holey quest: How to nucleate the holes in Swiss cheese. 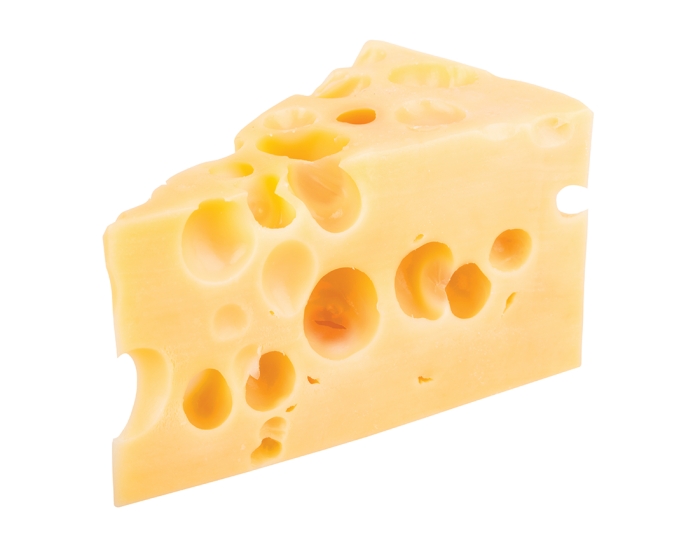 Credit: Shutterstock
A holey quest: How to nucleate the holes in Swiss cheese.

Thanks to an article in the International Dairy Journal, Newscripts can report that the answer to the hole formation mystery is hay. Yup, from the cow barn.

A team of Swiss food scientists found that “microparticles of plant origin” act as the nuclei for Swiss cheese holes and that these tiny particles control the number and size of the holes in a dose-dependent matter (2015, DOI: 10.1016/j.idairyj.2015.03.001).

The researchers had begun to suspect that hay microparticles were nucleating Swiss cheese holes because they had read that filtration and centrifugation of raw milk “drastically reduced” the number of holes in Swiss cheese. Furthermore, in summer, when cows are eating grass, there are fewer holes in cheese made from their milk, while in winter, when the bovine diet consists primarily of hay, more holes can be found in the cheese.

With the exciting hay remedy in hand, cheese makers may not always have to check for holes using ultrasound. Or “by listening to the type of sound made while tapping with a special hammer on the surface of a cheese loaf,” note the authors.

Food
Baking, old and new
Food Science
Food chemists uncover the secrets behind pretzels’ unique scent
Education
Sweets in an unexpected place and unexpected ingredients in sweets
Share X
To send an e-mail to multiple recipients, separate e-mail addresses with a comma, semicolon, or both.
Title: Space-Aged Whisky, Swiss Cheese Science
Author: Sarah Everts
Chemical & Engineering News will not share your email address with any other person or company.