Collective Vibration In A Protein Crystal 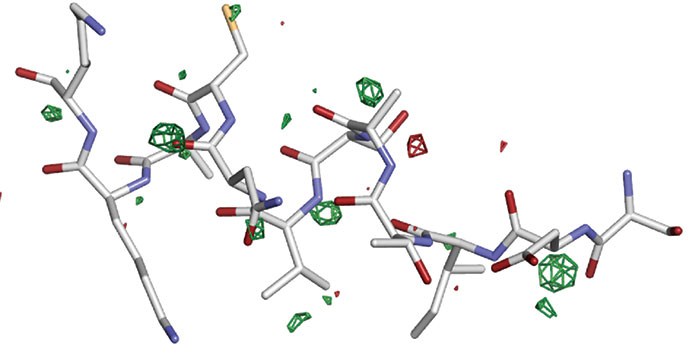 Credit: Gergely Katona
One of lysozyme’s helices compresses after being bombarded with terahertz radiation, as shown in this model. Green cages indicate electron density increases, and red cages show decreases.

Researchers in Sweden say they have evidence that it’s possible to collectively force a group of biological molecules into their lowest vibrational state, a phenomenon known as a Fröhlich condensate (Struct. Dyn. 2015, DOI: 10.1063/1.4931825).

Nearly 50 years ago, physicist Herbert Fröhlich theorized the possibility of such condensates, but they have never been unequivocally observed.

Fröhlich condensates are somewhat analogous to Bose-Einstein condensates, which are a collection of atoms that have been cooled to almost absolute zero. The atoms then occupy the same quantum state, behaving as a single quantum entity. In contrast, Fröhlich condensates, made of complex biological molecules would be produced at higher temperatures and would occupy a single, collective vibrational state.

Scientists have debated whether a Fröhlich condensate could even exist, and thus, the field has been controversial. If Fröhlich condensates could be generated, they would facilitate the exploration of vibrational effects on biochemistry.

A promising way to induce a Fröhlich condensate might be using terahertz radiation, which lies in between microwave and infrared radiation on the electromagnetic spectrum. Terahertz frequencies are low enough that they can produce slow vibrations in the many atoms in a large molecule, as opposed to higher energy radiation, which would affect only a few atoms.

To produce what they believe is a Fröhlich condensate, Gergely Katona of the University of Gothenburg and coworkers have bombarded a crystal made of lysozyme, an enzyme from chicken egg whites, with powerful bursts of terahertz radiation. They observed electron density changes in one of the protein’s helices that signal a compression in its structure. This change, which lasts for microseconds to milliseconds, is predicted to occur when the helix is in its lowest vibrational state.

If the electron density shift were merely induced by heat from the terahertz radiation, the compression would have disappeared so quickly, they would not have been able to observe anything, the researchers say. They surmise that this nonthermal structural change is in fact a Fröhlich condensate.

“Observing a Fröhlich condensation opens the door to a much wider-ranging study of what terahertz radiation does to proteins,” Katona says.

Researchers greeted the work with both praise and skepticism.

Peter Weightman, a physicist at the University of Liverpool, says the work shows strong evidence for a Fröhlich condensate. “It is a very clever experiment and a new approach to the subject,” he says.

Jeffrey Reimers, a physicist at the University of Technology Sydney, in Australia, says that he’s impressed with the experiment and the results. However, he says the system fails to meet the criteria for a true Fröhlich condensate, which would require satisfying an equation that predicts the number of quanta in the lowest frequency vibrational mode. Nevertheless, Reimers says, the authors have discovered “an important effect that touches on many critical scientific questions, which needs an explanation.”

Chemical Bonding
Chemists predict ghostly molecule
Spectroscopy
Breaking the single-molecule limit with terahertz spectroscopy
Analytical Chemistry
Weighing the proton
Share X
To send an e-mail to multiple recipients, separate e-mail addresses with a comma, semicolon, or both.
Title: Collective Vibration In A Protein Crystal
Author: Elizabeth K. Wilson
Chemical & Engineering News will not share your email address with any other person or company.