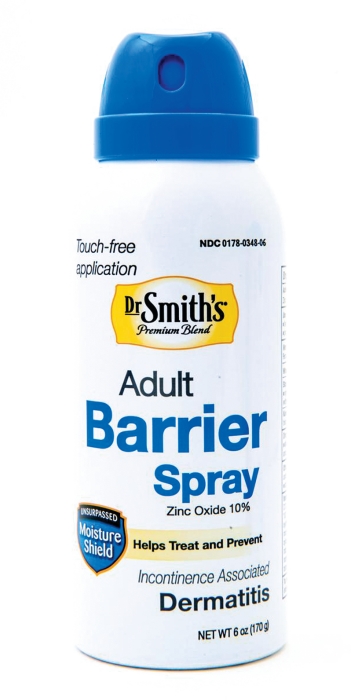 Credit: Honeywell/Mission Pharmacal
This skin rash spray contains Honeywell’s HFO-1234ze, which the firm claims has less of an impact on global warming than competitors’ offerings.

Spray-can propellants that damage Earth’s ozone layer are gone, but not everyone has warmed up to aerosols again.

Lauren Drakakis, a computer technician who lives in New York City, uses cooking oil spray but not hair spray or other pressurized aerosol products because she sees them as frivolous and not environmentally friendly. “I try to avoid them at all costs,” she says.

Some of those environmental concerns went away when chlorinated fluorocarbon propellants were removed from aerosols in the 1970s because they contributed to the depletion of Earth’s upper atmospheric ozone layer. Hydrofluorocarbon (HFC) replacements that don’t harm the ozone layer eventually took their place. Yet several HFCs contribute to global warming, and competing hydrocarbon propellants are factors in smog formation.

Still, not all consumers are troubled by aerosols. Patricia Kelly, a New York City homemaker, says she thinks aerosol products such as air freshener and cooking spray are fine, and she has no environmental concerns about them. They make her life easier and she wouldn’t hesitate to use them, she says.

Kelly might even be ready to try spray chocolate and spray ketchup, as the marketing whizzes at Honeywell International, maker of a new hydrofluoroolefin propellant, humorously suggest. As it turns out, other consumers might be interested in such sprayable condiments too.

A survey of 1,000 U.S. adults conducted for Honeywell earlier this year by ORC International found that more than 100 people thought spray chocolate was a good idea. Over 80 people liked the notion of spray ketchup.

While the unusual proposals for aerosol condiments didn’t get a stellar reception, the opinion research experts at ORC did find that 93% of those surveyed use aerosol products in some capacity. Hair spray, deodorant, paint, cooking oil spray, flat tire filler, shaving cream, and bug bombs are just some of the many aerosol products out there.

Most aerosol propellants are gases that turn into liquid under pressure inside a steel or aluminum can. When a user presses the valve on top of the can, the propellant forces a product inside the can through an internal tube and out of the valve, creating a spray or foam.

Demand for these propellants is significant. Despite the misgivings of consumers like Drakakis, North American aerosol production reached a historic high of 4.5 billion cans in 2014, according to the Consumer Specialty Products Association, a trade association.

Another trade group, the Consumer Aerosol Products Council, says these cans are engineered to combine product and propellant in just the right concentration, spray pattern, and particle size for the use at hand. The bulk of in-can propellants are blends that may include hydrocarbons and HFCs, which are liquids under pressure. Depending on the use, some propellants are compressed gases such as CO2 and nitrous oxide. 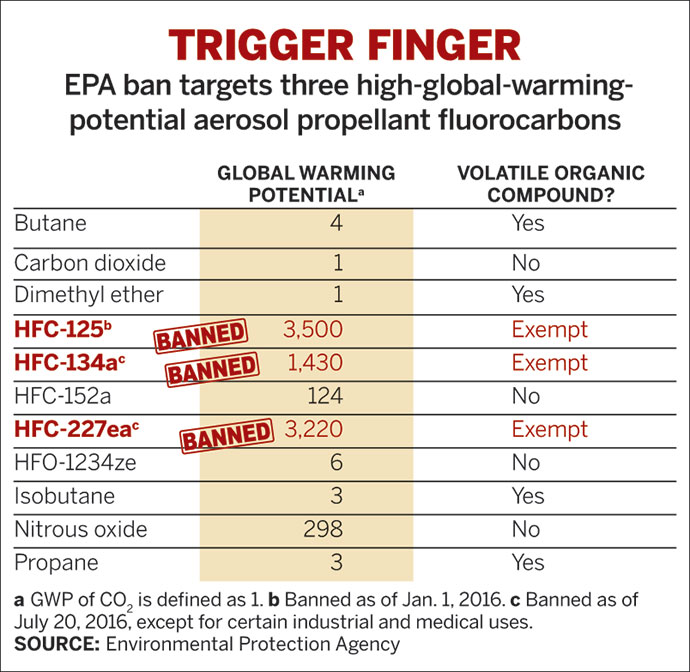 Honeywell is boldly promoting aerosol use in part because it wants to position its new product as a replacement for a group of HFCs that is on its way out. As of 2016, the U.S. Environmental Protection Agency is banning three HFC propellants: HFC-125, HFC-134a, and HFC-227ea. Exceptions are in place for certain industrial and medical uses.

EPA is taking the action because the three HFCs are significant contributors to global warming, with up to 3,500 times the effect of carbon dioxide. The European Union is also acting to limit use of HFCs with high global warming potential (CO2’s [GWP] is defined as 1).

Honeywell opened a plant in the third quarter of 2014 to make its new propellant, hydrofluoroolefin (HFO)-1234ze. The firm says the introduction of this product means aerosols that use the three HFCs won’t disappear along with the banned propellants. HFO-1234ze has many of the advantages of the HFCs, Honeywell says, but with a GWP that EPA sets at 6 and the Intergovernmental Panel on Climate Change sets at 1 based on recent testing.

At least one widely used HFC is hanging on. Chemours, the former DuPont performance chemicals business, says HFC-152a is available to replace other HFCs where needed. It has a GWP of 124, is not subject to EPA aerosol-use limitations, and is not a volatile organic compound (VOC). It is flammable, EPA says, but less so than hydrocarbons.

Widely used hydrocarbon-based propellants such as propane and butane are not significant global warming gases, but they have other problems. They are both VOCs and flammable, the top two concerns today for regulators when it comes to aerosol propellants, according to industry sources.

Propellant formulators concerned about VOCs are down to four options: Honeywell’s HFO-1234ze, HFC-152a from Chemours and other fluorochemical makers, and HFC-134a and HFC-227ea for niche industrial and medical uses. Factor in flammability and they are down to HFC-134a and HFC-227ea for niche uses and HFO-1234ze. David Cooper, Honeywell’s fluorine products business director, says HFO-1234ze is now the firm’s main propellant offering, though it still sells HFC-152a and the soon-to-be-banned HFC-134a.

Cooper ticks off the new HFO’s attributes: It has the lowest GWP of any fluorocarbon for aerosols, is nonflammable at ambient temperatures, is exempt from VOC regulations, and has low toxicity. “Given regulatory trends, HFO-1234ze is the logical alternative,” he adds.

But Chemours managers say HFC-152a is here to stay, at least for now. “Regulators are focusing on high-GWP propellants. We don’t anticipate any regulatory impact on HFC-152a,” says Magen Buterbaugh, the firm’s global fluorochemicals business manager. “HFC-152a is a long-term solution to meet the needs of the propellants industry: It offers the right balance of performance, price, and low-GWP properties.”

For some formulators, sticking with HFC-152a for now could be a good option. Ashland, a maker of hair spray fixatives, has been evaluating the new Honeywell offering in its aerosol test labs in Bridgewater, N.J. Linda Foltis, Ashland’s care specialties R&D vice president, calls HFO-1234ze an “exciting” new propellant, but she offers some caution.

HFO-1234ze is not a “direct substitute” for HFC-152a, which is widely used in low-VOC hair sprays. Substituting for HFC-152a would mean “quite a lot of R&D effort to reformulate and repackage sprays,” Foltis says. She suggests that will increase the cost of the final formulation.

However, industry observers suspect that regulators will enforce increasingly strict limitations on global warming gases in the future. In general, regulations are “subject to revision and tend to get more stringent over time,” points out Ray Will, a fluorochemicals specialist at IHS.

“I wouldn’t be surprised if HFC-152a got bad news at some point,” Will says. He suspects that Chemours will want to come out with an HFO with properties similar to those of HFO-1234ze. But he doesn’t see aerosol formulators rushing to adopt the Honeywell option because, for now, it costs more than HFC-152a, and HFC-152a is still acceptable to government regulators.

Honeywell’s Cooper is confident that the trend to more environmentally sustainable products will favor HFO-1234ze over the long haul. So while consumers like Drakakis may never buy sprayable chocolate, others who enjoy the convenience of aerosols may give it a try—and give HFOs a chance at long-term success.