Find out what Carbon3D has been up to since it appeared on C&EN’s 2015 Top Start-ups List by clicking here.

It’s been a while since the last industrial revolution. Joseph M. DeSimone and his company, Carbon3D, think humanity’s due for another.

Three-dimensional printing has the potential to fundamentally change manufacturing with its ability to create custom, on-demand parts. Doctors have saved lives with stents printed to fit the airways of infants, and astronauts can print tools and parts in space to save missions.

But 3-D printing is still largely a niche technology because current printers can’t create high-quality parts fast enough to compete with industrial methods. DeSimone believes Carbon3D’s new technology can. “I think it’s going to be game-changing for society,” he says.

Current printers create parts by stacking 2-D slices on top of each other. This stacking can take hours, and the layering can compromise a final product’s mechanical properties

Carbon3D, however, has developed a way to print high-performance parts up to 100 times as fast as conventional 3-D printers. The secret to the boost is chemistry.

Instead of layering slices on a platform, Carbon3D’s printer “grows” objects in a pool of resin, DeSimone says. The resin is cured, or hardened, using a combination of oxygen and ultraviolet light. 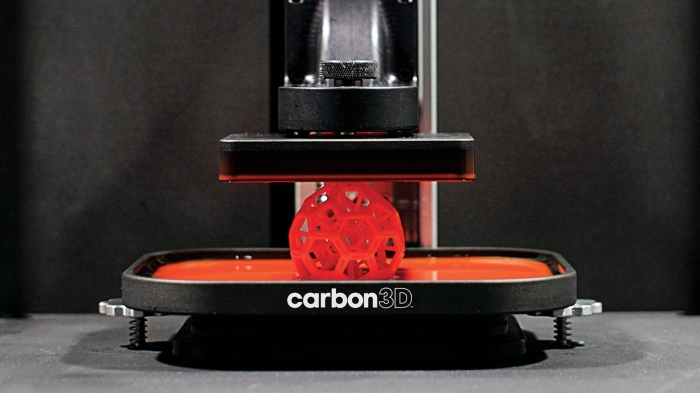 UV light shines up into the resin pool through an oxygen-permeable Teflon window at the bottom of the printer. This window controls the oxygen concentration in the resin such that there’s a plane or level within the pool that has the right conditions for curing when UV light hits it.

Curing in the middle of the pool allows uncured polymer to quickly replenish the polymerization region, greatly speeding up the printing process. A computer controls the platform that pulls the part out of the bath as it cures. The illumination pattern of UV light, which gives a part its shape, is also computer-controlled. The end result is that the printer appears to pull fully formed, complex objects out of the resin pool.

“We have to be really proficient at this intersection of hardware, software, and molecular science,” DeSimone explains. “It’s something that not many people have conquered.” 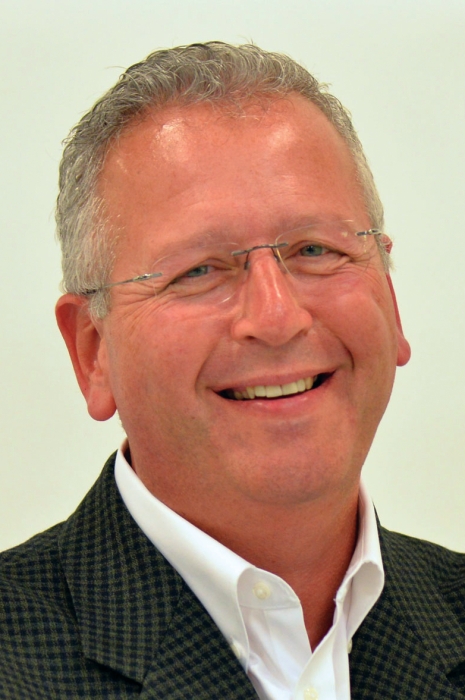 DeSimone unveiled the technology at a TED conference in March. Carbon3D went into the conference with support from the investment firm Sequoia Capital and has since added more big-name backers. Google Ventures led a recent $100 million investment, which also included Russian billionaire Yuri Milner and South Africa’s Rupert family.

Carbon3D already has more than 80 employees and is quickly expanding its portfolio of printable polymers. The team can print rigid plastics or flexible elastomers that perform just as well as materials used in more conventional processes such as injection molding, DeSimone says. Virtually anything an engineer can draw with design software can be printed. That could mean building auto parts with sophisticated microscopic lattices to add strength, reduce weight, and improve fuel efficiency.

“I think it’s going to revolutionize aerospace, automotive, washers and dryers, all sorts of things,” DeSimone says. Carbon3D has partnered with Ford Motor Co. and Legacy Effects, which designs visual effects for some of Hollywood’s biggest blockbusters. But DeSimone isn’t divulging what people can expect from either collaboration just yet.

“We’re pretty excited to transform these various industries,” DeSimone says. “Our technology is going to allow people to do things that heretofore have been impossible.”

Find out what Carbon3D has been up to since it appeared on C&EN’s 2015 Top Start-ups List by clicking here.

3-D Printing
Carbon is C&EN’s Company of the Year for 2019
3-D Printing
3-D printer can build meter-tall objects in just a few hours
3-D Printing
3-D printing start-up Carbon seeks to be found everywhere
Share X
To send an e-mail to multiple recipients, separate e-mail addresses with a comma, semicolon, or both.
Title: Carbon3D
Author: Matt Davenport
Chemical & Engineering News will not share your email address with any other person or company.