By the numbers: Chemistry graduate school enrollment remains flat in the US 2004–14

To see the most recent Council of Graduate Schools data, please click here.

Enrollment in chemistry graduate programs has been essentially flat for a decade, a recent study shows. But what that means for chemistry isn’t clear.

THE PAST DECADE OF CHEMISTRY GRAD SCHOOL
[+]Enlarge
First-time chemistry graduate school enrollment of U.S. citizens was almost flat between 2004 and 2014. Hispanic/Latino students showed the largest percentage increase in enrollment. NOTE: Data are for U.S. citizens enrolled in chemistry graduate school. Total first-time enrollment was 2,570, and total enrollment was 12,656. American Indian/Alaska Native numbers are not reported because they are too small to be significant. SOURCE: Council of Graduate Schools 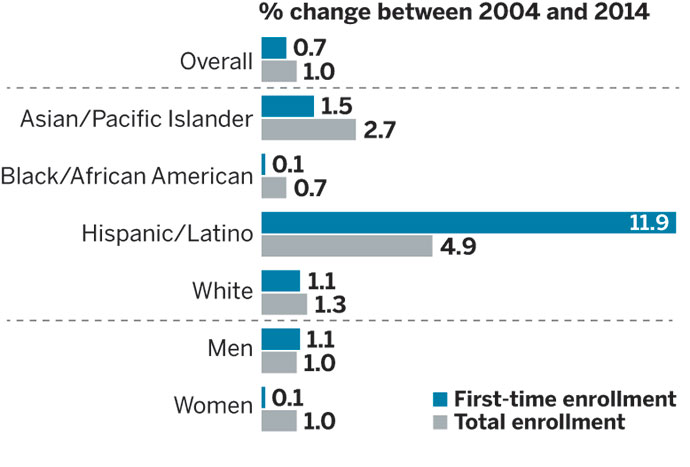 First-time chemistry graduate school enrollment of U.S. citizens was almost flat between 2004 and 2014. Hispanic/Latino students showed the largest percentage increase in enrollment. NOTE: Data are for U.S. citizens enrolled in chemistry graduate school. Total first-time enrollment was 2,570, and total enrollment was 12,656. American Indian/Alaska Native numbers are not reported because they are too small to be significant. SOURCE: Council of Graduate Schools

Whether the trend is good or bad is part of a larger debate about the state of chemistry education. Even before the 2008 financial crisis pushed up the unemployment rate for many fields, including chemistry, the community was wrangling over whether it was producing too many Ph.D. chemists.

Some people argue that a Ph.D. in chemistry gives students a broad education that can be used both inside and outside of academia and in the chemical, pharmaceutical, and other industries. But others say that what matters is whether students who graduate can get the jobs they want.

The only way to find out is “to track these things and to pay attention,” says Steven Corcelli, chair of the American Chemical Society’s Graduate Education Advisory Board. That’s why information like the new Council of Graduate Schools (CGS) report is important, says Corcelli, a University of Notre Dame professor.

The report, which is not publicly available, found that first-time enrollment in chemistry graduate programs in the U.S. rose less than 1% between 2004 and 2014; by contrast, overall first-time graduate school enrollment was up 3.5%.

But the report also points to some potential good news. Even though enrollment was flat, the percentage of students receiving chemistry doctorates was up 4.1% between 2004 and 2014, which indicates improved student retention. Among women, it climbed 6.4%.

Although the proportion of women, African Americans, and Asian Americans enrolling in chemistry graduate programs barely budged, more Hispanic students are joining chemistry departments. First-time enrollment among Hispanics was up almost 12% between 2004 and 2014.

At Marquette University, decisions on whether to bring in more graduate students are driven by many factors, including information on available jobs and grant funding, says Jeanne M. Hossenlopp, a chemist and dean of research there.

The school’s research funding has been flat during the past few years, which reflects the experience of many chemistry departments as federal research funding has become more difficult to get. As a result, the department has kept its number of chemistry students constant. “If the market doesn’t support more students, then you don’t want to have more students,” she says.

Corcelli says that “there is always this temptation to grow.” Even his own department has expanded in the past few years. But the chemistry education community needs to make sure it remains healthy, he says.

WHO IS GOING TO GRAD SCHOOL?
[+]Enlarge
A look at who enrolled in chemistry programs in 2014. NOTE: Data are for U.S. citizens. SOURCE: Council of Graduate Schools 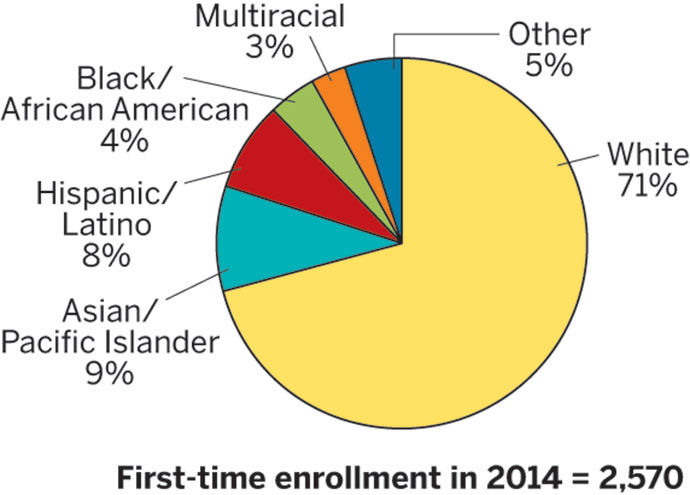 A look at who enrolled in chemistry programs in 2014. NOTE: Data are for U.S. citizens. SOURCE: Council of Graduate Schools

Fixed numbers for enrollment might be the happy medium. “Flat is one thing, but I think declines could be detrimental to the whole enterprise.”

First-time graduate enrollment is also flat in the larger physical science community, but that isn’t true for all science disciplines. For example, chemical engineering climbed 4.1% between 2004 and 2014, the CGS study says. And the biological sciences—which include biochemistry in this study—went up 2.8%.

WHO IS GRADUATING?
[+]Enlarge
Although enrollment was flat between 2004 and 2014, the percentage of students graduating increased.

Although enrollment was flat between 2004 and 2014, the percentage of students graduating increased.

That could be because undergraduate students don’t always understand how chemistry connects to some exciting research challenges, Hossenlopp says, such as synthetic biology or understanding the brain. “We have not done as good a job as we can promoting why chemistry is important in these emerging disciplines.”

In addition, students might not see the possibilities for chemistry-related jobs, says Rigoberto Hernandez, a chemistry professor at Georgia Institute of Technology. “Students are voting with their feet. They are going where they find the most potential for employment,” he says. “That doesn’t mean that there are not opportunities.”

But that perceived lack of employment opportunities could be why first-time enrollment of African and Asian American U.S. citizens didn’t increase during the past decade, as the report shows. Talented minority students could be choosing to go into different fields.

Minority enrollment “numbers are always discouraging, and they are always small,” explains Sandra Laursen, codirector of Ethnography & Evaluation Research at the University of Colorado, Boulder. The new numbers belie the significant effort chemistry departments are putting into increasing the number of minorities in chemistry.

As director of the Open Chemistry Collaborative in Diversity Equity (OXIDE), Hernandez knows that many chemistry departments are making changes to increase diversity. What’s not clear is whether those changes are convincing such students to go to graduate school in chemistry, he says.

Laursen, who published a paper last year on diversity in chemistry departments, says it’s hard to tell whether the 11.9% increase in first-time enrollment for Hispanic graduate students is a result of those efforts. It could simply reflect the overall increase in the number of Hispanic students going to college. “That may be a group where cultural change is making more of a difference” than efforts by individual departments, she says.

One area where the chemistry education community’s efforts seem to be making a difference is in graduate student retention. The CGS report shows that chemistry graduation rates are up overall. Hernandez is especially glad to see that improvement included both men and women. “It is important that the environment improves for everyone,” he says.

Many panels have highlighted problems in chemistry graduate education and suggested changes, such as shortening the time to complete degrees, improving mentoring, and outlining clear graduation requirements. Laursen says her work shows that “it is highly variable by department, and the departments who work at it do it better.”

Corcelli hopes that people will use the CGS data shown here and other reports on graduate enrollment to figure out ways to make chemistry departments better for graduate students, no matter how many are enrolling. “Data like these don’t give us the remedy” to chemistry education’s problems, he says. “But it is good that we continue to be aware of these things.”

Career Tips
Zoomed out? Here’s how to manage expectations
Careers
Career Ladder: Joyce Nethery
Postdocs
Postdocs ponder missed opportunities caused by the coronavirus pandemic
Share X
To send an e-mail to multiple recipients, separate e-mail addresses with a comma, semicolon, or both.
Title: By the numbers: Chemistry graduate school enrollment remains flat in the US 2004–14
Author: Andrea Widener
Chemical & Engineering News will not share your email address with any other person or company.