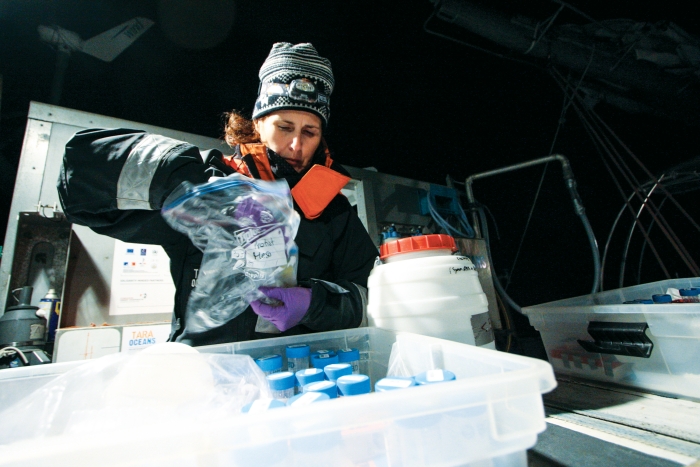 When she signed up to be the logistic mastermind behind a four-year sailboat research trip to catalog the ocean’s microbiome, Stefanie Kandels-Lewis couldn’t have predicted the problems she’d have to fix, often in far-flung locations and with a tight deadline.

The Tara Oceans expedition—60 stopovers in 35 countries from 2010 to 2013—followed the path of Charles Darwin’s famous 19th-century H.M.S. Beagle and Challenger journeys. 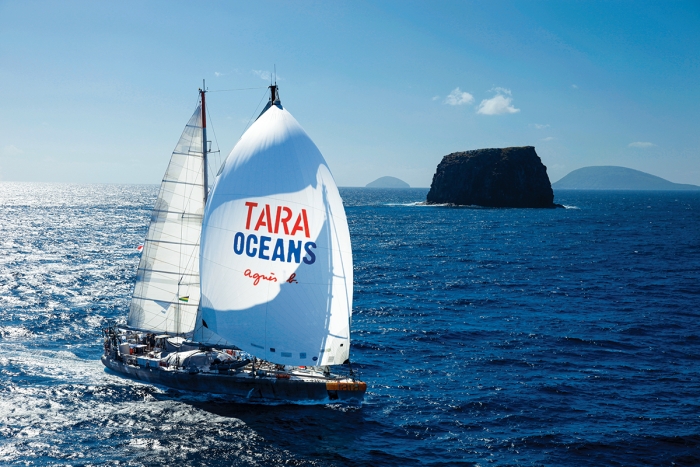 As the project’s round-the-clock fixer, Kandels-Lewis had to crawl inside the boat’s engine room to snap photos of broken parts in Lisbon; she tracked down liquid nitrogen in Sharm el-Sheikh, Egypt; and she shopped for 20 construction hats in Guayaquil, Ecuador, so that the boat and its crew could legally enter the container port after weeks at sea. “There were always surprises and a few close calls,” she says. “But somehow we always found a solution.”

Before becoming the fixer for the Tara Oceans project, Kandels-Lewis had been a lab technician for 20 years. She had a good working relationship with her boss, Eric Karsenti, at the European Molecular Biology Laboratory in Heidelberg, Germany, but she was starting to get bored with lab work itself. “Eric had been talking for years about this romantic idea of circumnavigating the world, inspired by Darwin’s Beagle mission,” she says. “One day he came to me and said, ‘I’ve got a boat!’ and then he said, ‘If you’re interested, I need your help.’ ”

The boat was a 36-meter schooner with seven shared cabins that housed six crew members, six scientists, one journalist, and sometimes an artist. The onboard lab was the size of two portable toilets. It was such tight quarters that people coming on board were advised to travel with soft-shell luggage, “in case they had to sleep on their suitcases,” Kandels-Lewis says.

The Tara Oceans project’s main goal was to take sea samples at hundreds of stops around the world, to categorize the world’s marine viruses, bacteria, and plankton through DNA sequencing, microscopy, and bioinformatics. In addition, researchers on board worked on a potpourri of other research projects, such as surveying ocean microplastic pollution and studying the effects of ocean iron fertilization.

In May of this year, the project’s scientists published five papers in Science, with more to come. An associated commentary hailed the microbiome genetic database created by the expedition as “a treasure trove of data” and “evidence for extensive networks of previously hidden biological interactions” (2015, DOI: 10.1126/science.aaa7378).

And the person with the job of making sure this expedition went off without a hitch was Kandels-Lewis.

In practice, this meant coordinating—from an office in Heidelberg—where the boat would travel and when as well as making sure the boat was stocked with enough lab supplies to reach the next port but not too many for the boat’s limited storage space. Kandels-Lewis also met the boat every six weeks to organize the shipment of bar-coded samples, some of which required storage at –20 °C or 4 °C, from far-flung ports such as Djibouti, Buenos Aires, or the Maldives. The entire expedition produced 27,885 such samples.

[+]Enlarge
Credit: Christian Sardet/Tara Expedition
This copepod was plucked out of the Mediterranean by the Tara Oceans expedition. 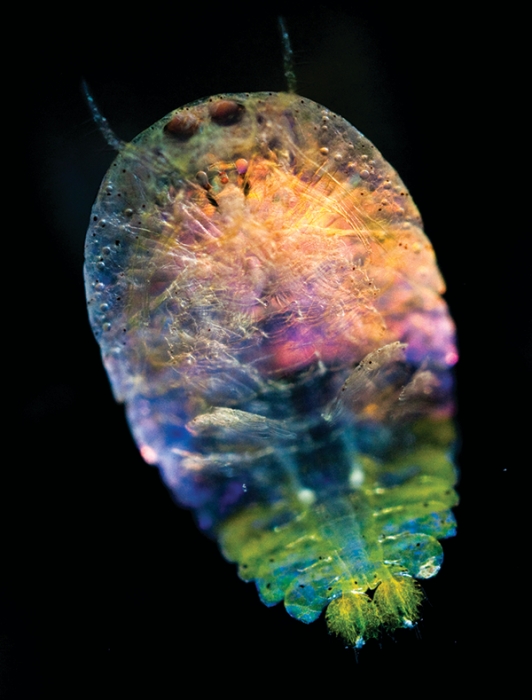 Credit: Christian Sardet/Tara Expedition
This copepod was plucked out of the Mediterranean by the Tara Oceans expedition.

In Mayotte, an island near Madagascar in the Indian Ocean, there wasn’t even a port to work with. Kandels-Lewis recalls a hairy unloading from the ship to a barge in choppy water, racing against time to get the precious samples to land before the tide changed.

For all of the samples, “it was absolutely necessary that they were shipped back to Frankfurt, and fast, without interrupting the cooling chain,” Kandels-Lewis says. Frankfurt is an international shipping hub. Kandels-Lewis would meet up with the samples there and repackage them to be shipped to labs around the world.

In between international pickups, “I was the hub for all information and problems,” she says. Kandels-Lewis also coordinated who would be on the boat and when, planned all their travel, and secured visas.

[+]Enlarge
Credit: Christian Sardet/Tara Expedition
The green and yellow chloroplasts visible in this diatom collected by the expedition help it harvest energy from sunlight in the Indian Ocean. 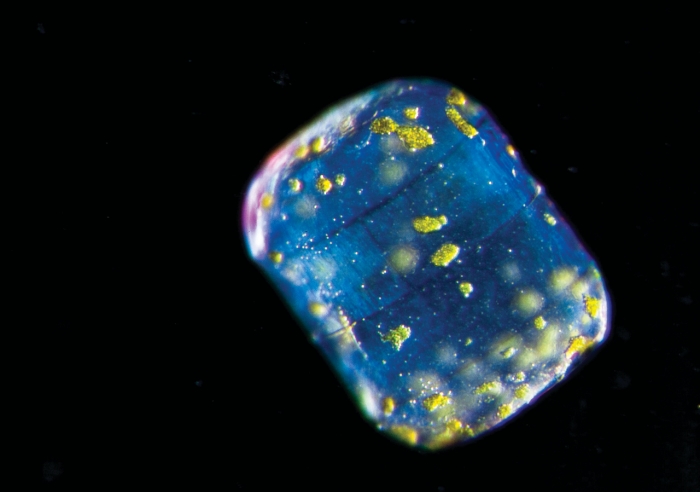 Credit: Christian Sardet/Tara Expedition
The green and yellow chloroplasts visible in this diatom collected by the expedition help it harvest energy from sunlight in the Indian Ocean.

“And sometimes I felt like the ship’s psychologist,” she says. “People who have been at sea for a month sometimes start hating each other. It’s tight and small. People are tired and stressed. People would vent at me the moment I got on board.” So Kandels-Lewis had to matchmake onboard teams to ensure the project ran smoothly. Of course, close quarters can also lead to romance: Kandels-Lewis says three couples came together during the course of the project.

One of the biggest challenges Kandels-Lewis faced was her own seasickness. “I was the kind of person who didn’t like camping or the outdoors.” With time, she overcame her seasickness and even joined the crew for a four-week leg in the South Pacific. When the ship’s biology engineer broke her foot in San Diego, Kandels-Lewis stepped in at the last moment to fill in as an onboard lab tech.

“The wet lab is the size of two Dixie toilets, and we were often two people working in there. There were rough seas, it was cold—it was January—and you bump up against everything. I was full of bruises—it looked like I had been in a massive car accident.”

But her time onboard made her realize that “luxury has nothing to do with money.” Luxury is being alone in the middle of the ocean, she says, enjoying the sky at night.

A key to keeping the expedition running smoothly—from the logistics to the people—was being honest, she says. “You cannot promise things you cannot keep.” That being said, if you can’t solve a problem yourself, “you have to find someone who can. People on the ship are relying on you.” She’s the kind of person, she says, “that can’t watch the shit hit the fan” without doing something about it, a characteristic that probably helped her succeed.

Back at home base in Heidelberg, Kandels-Lewis is now helping coordinate the expedition’s data analysis and research publications, as well as events with the boat, such as its appearance at the COP21 climate change conference in December in Paris.

When she stops and thinks back on her time running the Tara Oceans expedition, “I just can’t think of anything that could top it.” 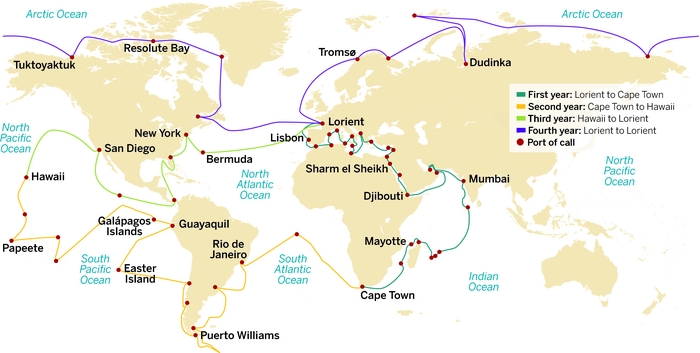 The Tara Oceans expedition was inspired by Darwin’s famous journeys on the H.M.S. Beagle and Challenger.

Environment
What’s on the horizon for drones doing science?
Education
The Future Of Fisticuffs; Toys, Tech & Telemetry
Education
Travels With Beaker
Share X
To send an e-mail to multiple recipients, separate e-mail addresses with a comma, semicolon, or both.
Title: C&EN Talks With Microbiome Surveyor Stefanie Kandels-Lewis
Author: Sarah Everts
Chemical & Engineering News will not share your email address with any other person or company.