Clearing Up Cataracts With Cholesterol-like Molecules

Eye drops loaded with sterols can break up cataracts in animals, but some experts are skeptical about whether the treatment will work in people 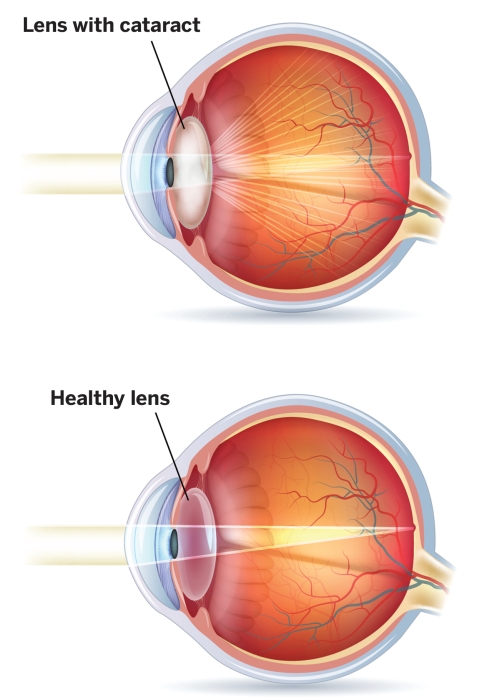 Credit: Shutterstock
In cataracts, protein aggregation causes light to scatter in the eye, making it difficult to resolve images.

If you’re fortunate to live a long, rich life, the odds are good that you’re going to get cataracts. According to the National Eye Institute, more than half of people in the U.S. over the age of 80 have cataracts or have had cataract-removal surgery.

And with the country’s aging population, it’s predicted that in the next 35 years, the number of Americans with cataracts will double to about 50 million. Despite those growing numbers, the condition is more of a nuisance than a crisis in developed nations. Surgery to restore vision by replacing cloudy lenses with plastic prosthetics is commonplace and has few complications. That’s not the case in rural regions of developing countries. In parts of China, India, and sub-Saharan Africa, millions of people don’t have access to surgery and are blind from cataracts.

This year, two research teams working independently discovered they could clear up cataracts in animals using eye drops loaded with certain sterols. Although preliminary, the findings could lead to the first nonsurgical cataract treatment, the researchers claim. But not everyone is convinced the discovery will translate to a treatment for people.

A cataract is a clouding of the eye’s lens caused by aggregated proteins. The proteins clump together, and when the clumps get large enough, they scatter light coming into the eye making it difficult to resolve images. Some cataracts are caused by genetic mutations in eye proteins, but the vast majority comes from a slow accumulation of clumped proteins brought on by damage to the eye from oxidation, environmental factors, hyperglycemia, smoking, or aging.

Protein damage happens in the body’s cells all the time, but the unique biology of the lens is what eventually leads to cataracts. The lens is made out of tightly packed fiber cells; if you were to slice it open, it would look something like an onion. “Around the time you’re born, fiber cells in the lens lose the ability to make new protein or remove old protein,” explains Jason E. Gestwicki, a protein scientist at the University of California, San Francisco. “So the proteins in the lens of your eye are as old as you are and always will be.”

Most of the body’s proteins turn over within minutes, Gestwicki explains, so proteins meant to last a lifetime are unusual. “They’re really hardy proteins, but over decades they take enough damage that you get cataracts,” he says.

But, over time, the amount of damaged proteins in lens cells overwhelms the chaperones’ capacity, and cataracts form.

Gestwicki and his team wanted to find a way to boost α-crystallins’ chaperoning activity to possibly clear up cataracts. They ran a screen of small molecules, looking for ones that could make clumped-up α-crystallins fall apart at lower temperatures. Such molecules could restore overwhelmed or damaged chaperones in the lens. The team tested 2,450 compounds and found 32 that lowered α-crystallins’ melting temperature. Of those 32, 12 were oxysterols.

Gestwicki didn’t know it at the time, but one of those oxysterols—lanosterol—was being explored by another group for its ability to clear up cataracts. Kang Zhang, a professor of ophthalmology at UC San Diego, had been studying two families with congenital cataracts. Both families had genetic mutations that led to defects in the enzyme that produces lanosterol in the eye.

Zhang’s group did computational studies that suggested lanosterol could bind β- and γ-crystallins—other abundant lens proteins—and could keep them from clumping. They did in vitro tests on rabbit lenses and found they could restore lens clarity with lanosterol. Then they decreased cataract severity in dogs by injecting lanosterol into the animals’ lenses while also applying the sterol topically. Zhang’s team published the work in Nature in July (DOI: 10.1038/nature14650; C&EN, July 27, page 11).

Gestwicki says he was excited when he saw Zhang’s paper come out, although his work, which was under review at Science at the time, had headed in a different but related direction. Though lanosterol had shown up in his initial screen, it hadn’t been the most potent compound. After looking at more oxysterols, they found 25-hydroxycholesterol to be most promising. 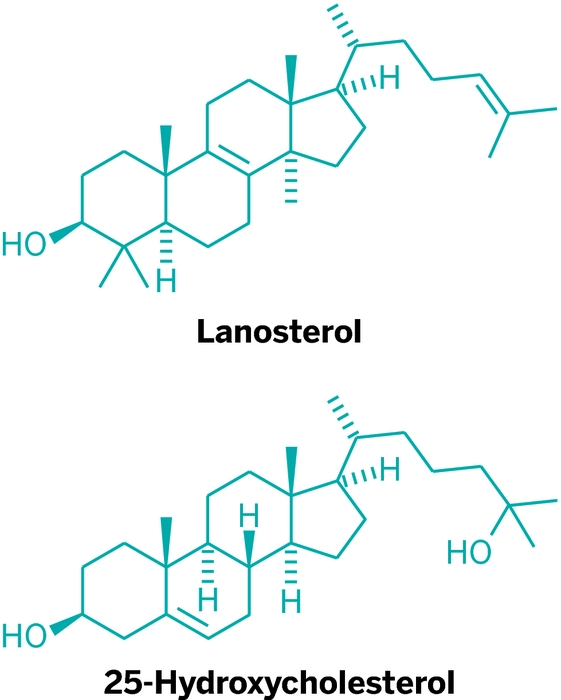 A team led by Gestwicki’s collaborator Usha P. Andley, an ophthalmology professor at Washington University in St. Louis, found eye drops containing the compound cleared up cataracts in mice with a genetic form of the condition in two weeks and also in human lenses removed from patients after cataract surgery. Gestwicki and Andley’s report appeared in Science earlier this month (DOI: 10.1126/science.aac9145).

“Both of these studies are unusual in that they move from hard core molecular biology to animal studies,” comments Jonathan A. King, a biologist at Massachusetts Institute of Technology, who studies crystallins. “I think it’s very convincing and compelling data.”

J. Fielding Hejtmancik, an expert in genetic eye diseases at the National Eye Institute, says he wouldn’t be surprised if the work from these groups led to a topical treatment for cataracts. “They’re not long shots,” he says, adding that the papers are really just the first steps on that path. “I think it’s possible that in a decade or two a therapeutic agent could come out of this, but it’s a long pathway and it’s full of potential problems.”

Other researchers are more skeptical. Suraj P. Bhat, of UCLA’s Jules Stein Eye Institute, isn’t convinced that the protein aggregates the researchers studied in their preliminary in vitro studies are relevant to ones found in patients’ lenses. Nor is he convinced by the animal studies or the results with the ex vivo lenses. Even though the lenses have been cleared, he’s not sure that translates to restoration of vision. Also, he wonders if the compounds will work on cataracts in lenses that are 60, 70, or even 80 years old.

Barbara Pierscionek, an expert in eye and vision research at Kingston University, agrees that there are limitations to both the in vitro and animal experiments. When testing drug-based therapies for cataracts, it can be difficult to draw conclusions from in vitro experiments alone, she explains. “Just because you clear up protein aggregation in a test tube does not mean that is necessarily what is happening in a whole lens.”

As for the animal results, Pierscionek points out that the dogs used in Zhang’s study have a genetic mutation that causes cataracts. This does not necessarily make them an ideal model for the age-related cataracts common in humans, she says. She also cautions about using mouse models, as Gestwicki and Andley did. “A mouse has a different complement of proteins, so a mouse model for cataract may not replicate what happens on a human lens,” she says.

A topical treatment is not impossible for cataracts, and these studies offer prospects for further research, Pierscionek says. But she adds, “It will require a lot more work.”

Both groups of researchers are working to bring the treatments to people. The biotech company ViewPoint Therapeutics was founded to develop the research from Gestwicki’s and Andley’s labs. And Zhang tells C&EN he plans to take lanosterol into clinical trials next year.

Comments
Rexanne Sprague, MSA, BSN, RN, CNOR (June 3, 2016 10:24 AM)
I just read an overview of a presentation in the UMHS News by alumna, Leah Makley, Ph.D., about developing treatments for cataracts and the beginning human trials in the next two years. As a nurse with "trace" cataracts I look forward to hearing the outcomes. I am most hopeful to have access to this medical treatment. Many thanks to all who are involved in this endeavor!
Reply »