A NEW HOME
[+]Enlarge
Credit: Newscom
Syrian refugees wait in the Budapest train station for transportation to Germany, where they will seek asylum. 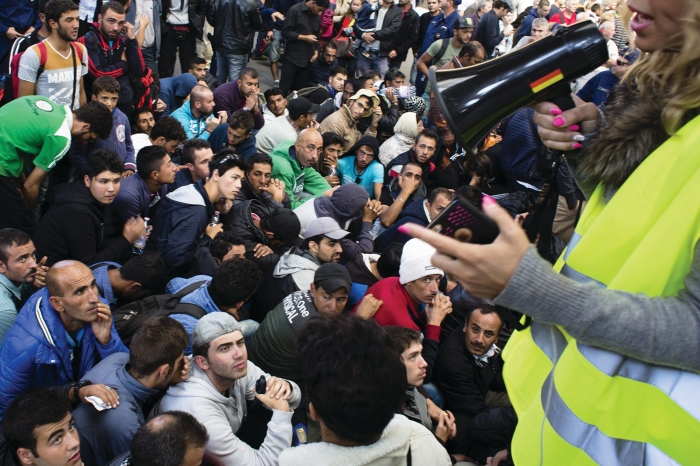 Credit: Newscom
Syrian refugees wait in the Budapest train station for transportation to Germany, where they will seek asylum.

Last July, Carmen Bachmann had an idea. The University of Leipzig professor wanted to help the growing influx of refugees arriving in Germany from conflict-ridden Syria, as well as from Afghanistan, Iraq, and elsewhere. With the help of an undergraduate student, Bachmann built an online platform called “Chance for Science” designed to connect refugee scientists with local academics.

SUDDEN SURGE IN REFUGEES
[+]Enlarge
Europe has seen a large influx in refugees in 2015, primarily from Syria. Germany and Sweden are two popular destinations because they have said they are ready to welcome migrants. SOURCES: German Federal Office for Migration & Refugees and Swedish Migration Agency 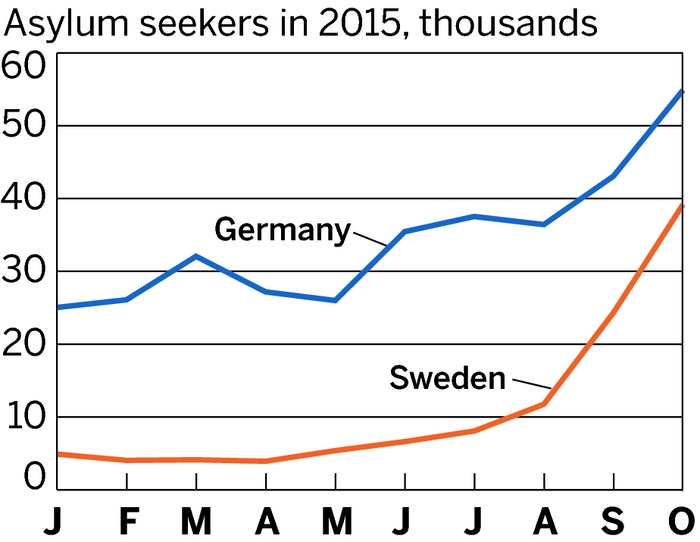 Europe has seen a large influx in refugees in 2015, primarily from Syria. Germany and Sweden are two popular destinations because they have said they are ready to welcome migrants. SOURCES: German Federal Office for Migration & Refugees and Swedish Migration Agency

Bachmann’s organization is one of several efforts reaching out to scientists and engineers thought to be among the hundreds of thousands of refugees, asylum seekers, and others in Europe looking for temporary safety from conflict in the Middle East. Many European countries are tightening their borders to refugees after this month’s deadly terrorist attacks in Paris. But given how many people have already arrived, nonprofits and government agencies reckon there must be some highly qualified scientists among them. Finding those trained in the sciences will be difficult. And figuring out how to help them might be even harder, given that the migrants’ challenges include finding housing, language barriers, and asylum applications.

The United Nations High Commissioner for Refugees estimates that well over 800,000 refugees and asylum seekers arrived in Europe by sea alone so far this year, more than half of whom came from Syria, and nearly one-fifth of whom came from Afghanistan. Those numbers dwarf efforts in the U.S., which accepted just 132 in 2014, according to the U.S. Department of Health & Human Services. Earlier this year, President Barack Obama promised to accept 10,000 refugees from Syria in the next year. However, there has been a backlash against that plan in the U.S. after the Paris attacks.

Refugees who want to stay in Europe—many hope to make it to Germany or Sweden—must obtain visas that allow either temporary asylum or permission to immigrate. Only then can they think about procuring permission to work—and searching for jobs in what are already tight academic and industry markets.

This is just the most recent of Europe’s waves of immigrants. Before the current flood of Syrians, for example, Iraqis arrived in droves in the 1990s and again in the 2000s. Statistics from the European Union show that since 2009, non-EU citizens’ rates of employment have dropped relative to that of EU citizens. These numbers suggest it will be harder for current refugees to find jobs if and when they receive permission to work.

Last month, the European Commission’s research and innovation directorate announced its Science4Refugees initiative. The agency hopes its online platform—tied to its existing jobs portal, Euraxess—will act as a kind of matchmaker for refugees seeking science jobs and raise the profile of immigration issues among scientists. But it offers no financial support. Those working on the program say that it’s too soon to evaluate success; meanwhile, the initiative’s staff is working to boost awareness of the program among refugees.

They acknowledge that finding their target audience will be difficult and take some time; they hope to find other networks and websites in different countries working on the same goals. As of mid-November, universities have already flagged some 150 jobs on Euraxess with the Science4Refugees label, highlighting their willingness to consider assisting applicants with visas and other red tape. But only around 20 CVs were posted by people with refugee status.

That could be because many refugees are still getting settled. First-time asylum seekers have registered in Germany, Hungary, Austria, France, Italy, and Sweden in the greatest numbers. Germany is the number one destination of choice for current refugees: 343,000 applied for asylum between January and October. But getting a work visa could take several months to a year, even after getting asylum papers.

The situation is easier in Sweden, which welcomed more than 112,000 refugees from January to October. Although it can take months to grant an individual asylum seeker status, individuals have permission to work in the country the day after receiving their papers. Earlier waves of migration to Sweden have led to assistance programs that eventually could be useful to recent arrivals. For example, the Swedish government offers to pay salaries for researchers in six-month internships with universities and companies; that offer is open to educated immigrants with the right to work as well as Swedes who have been unemployed for six months or more.

But in Sweden, as in other EU countries, language could prove to be a stumbling block for even educated asylum seekers: State-sponsored intensive language courses for engineers, medical personnel, and others take one-and-a-half years to complete to teach proficiency in workaday Swedish. Still, the language of science is English, and that may be the case in Lebanon or Syria just as much as it is in Sweden or Germany. Back at the University of Leipzig, refugees who may have had their studies disrupted can audit courses taught in German or English if they are proficient in these languages. (The university has no numbers yet on how many students are taking advantage of these resources.)

The Free University of Berlin is also opening courses to refugees even though they are not officially enrolled as students. The university sees this as preparation for enrollment at a later stage, once they have received visas or other kinds of permission to attend classes. In the meantime, already-enrolled students can volunteer to assist refugees in getting familiar with the university, work that counts for credit in job-qualification courses.

Meanwhile, Bachmann’s “Chance for Science” now has 200 people registered on the online platform. Only 20 are refugees and might have asylum status. Bachmann is not sure that her efforts will make a difference, but she hopes she can help keep knowledgeable people in their fields.

The situation for many recently arrived people is “horrible,” Bachmann says. “Of course they need places to stay and something to eat. But they also need to use their brains.”

Naomi Lubick is a freelance reporter in Stockholm.

Sustainability
US Senate passes sustainable chemistry legislation
Environment
P2 and ADM pair up for renewable products
Recycling
Coca-Cola bottler invests in recycling
Share X
To send an e-mail to multiple recipients, separate e-mail addresses with a comma, semicolon, or both.
Title: Help For Refugee Researchers
Author: Naomi Lubick
Chemical & Engineering News will not share your email address with any other person or company.