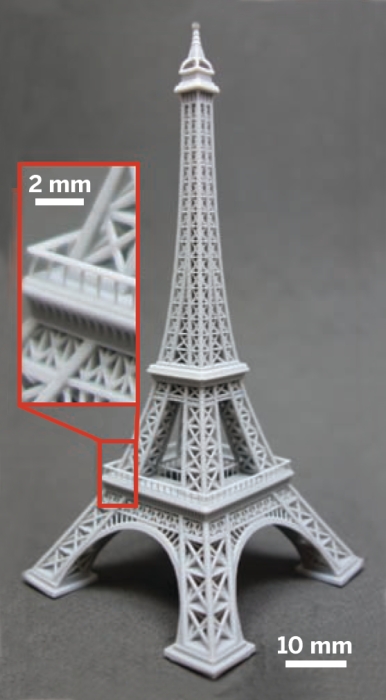 Serial chemist-inventor Joseph M. DeSimone and his latest company, Carbon3D, made headlines in March when they unveiled a three-dimensional printer that appeared to pull fully formed objects, including a small plastic Eiffel Tower, from a pool of liquid resin (Science 2015, DOI: 10.1126/science.aaa2397). The company’s machine prints parts up to 100 times as fast as conventional 3-D printers, which stack 2-D layers of material on top of each other to build up 3-D objects and typically take hours to do so. Carbon3D’s printer possesses a speed and an appearance alien to 3-D printers, explaining, in part, why many of those March headlines were steeped in science fiction. The other part of the explanation comes from DeSimone announcing that the technology was inspired by T-1000, a time-traveling robot assassin from the 1991 film “Terminator 2” who could liquefy and morph into humanoid form. But Carbon3D’s core science isn’t robotics. It’s chemistry. The company’s 3-D printer creates a surface that initiates polymerization within a resin pool. This surface isn’t a physical object, but rather a depth at which there’s precisely enough oxygen and patterned ultraviolet light to cure the liquid resin. Oxygen and UV light penetrate the resin through a Teflon window under the pool. The patterned UV light controls the shape of a printed part while a platform pulls the part upward. Overall, the process enables continuous curing of a variety of materials, ranging from flexible elastomers to rigid plastics, DeSimone says. With these advances, Carbon3D aims to fundamentally change manufacturing. “We believe in a future fabricated with light,” DeSimone adds. “This can only be achieved by being proficient at the intersection of hardware, software, and molecular science.”