C&EN’s Molecules Of The Year

Structure Menagerie: Compounds that made headlines in 2015

C&EN’s Molecules Of The Year 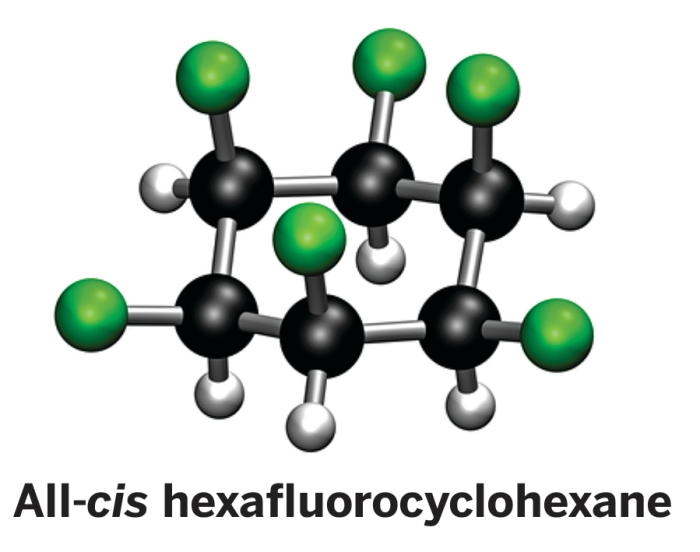 Chemists this year made the all-cis isomer of 1,2,3,4,5,6-hexafluorocyclohexane, a crystalline ring molecule with all six fluorines pointing “up” and all six hydrogens pointing “down.” This compound, produced by David O’Hagan, Neil S. Keddie, and coworkers of the University of St. Andrews, is remarkable for having a dipole moment of 6.2 debyes, making it the most polar nonionic aliphatic compound known to exist (Nat. Chem. 2015, DOI: 10.1038/nchem.2232). The deceptively simple molecule was a complex synthetic target because it required 12 steps to make and has nine possible isomers that can adopt up to 15 conformations.

[+]Enlarge
Synthesis of the very polar all-cis hexafluorocyclohexane proceeds in 12 steps via a dianhydroinositol intermediate. 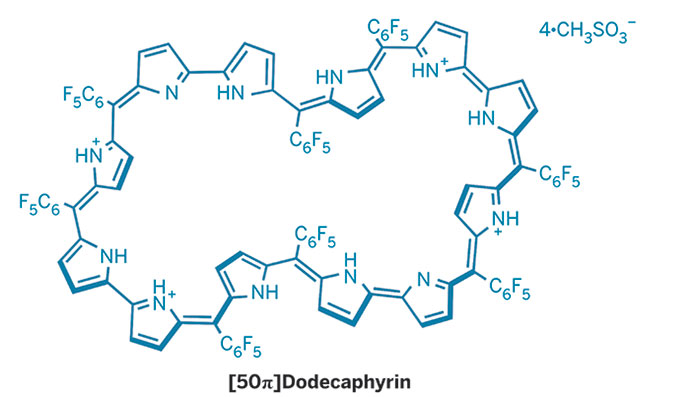 By increasing the number of pyrrole groups in a porphyrin ring from the usual four to 12, a team led by Dongho Kim of Yonsei University and Atsuhiro Osuka of Kyoto University succeeded in making a dodecaphyrin containing 50 π electrons—the largest aromatic molecule known to date (Chem. Eur. J. 2015, DOI: 10.1002/chem.201500650). The compound bests the former aromaticity record holder, a [46π]decaphyrin the same researchers made last year. 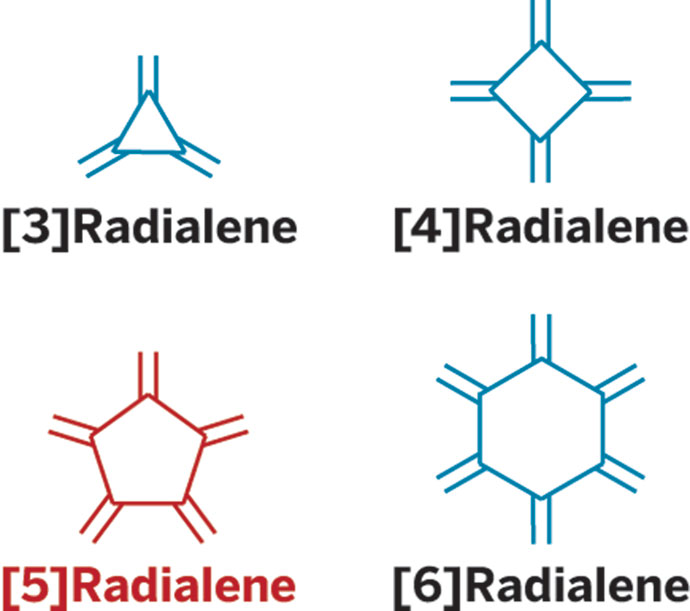 Radialenes are a unique class of star-shaped cyclic hydrocarbons that have double bonds radiating out from each carbon in the ring. Prior to this year, chemists had made the three-, four-, and six-membered ring versions of these polyenes, but never [5]radialene—it had always been too unstable. A research team including Emily G. Mackay and Michael S. Sherburn of Australian National University and Michael N. Paddon-Row of the University of New South Wales developed a synthetic strategy to make the missing link for the first time (J. Am. Chem. Soc. 2015, DOI: 10.1021/jacs.5b07445).

[+]Enlarge
Credit: Alexander Boldyrev
A top view and side view of CoB16–; connections between atoms help visualize the structure but do not necessarily indicate bonds. 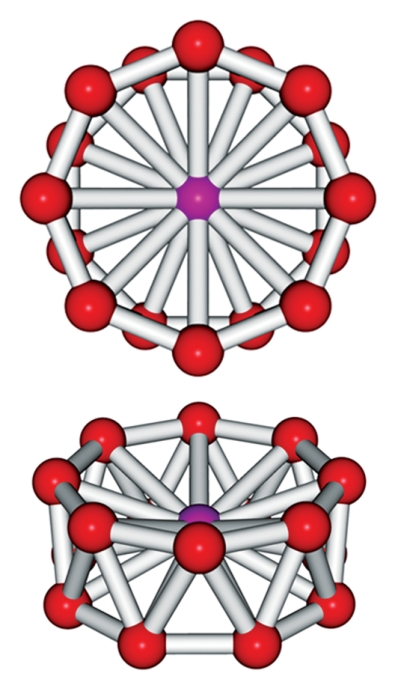 Credit: Alexander Boldyrev
A top view and side view of CoB16–; connections between atoms help visualize the structure but do not necessarily indicate bonds.

A multinational research team this year created a drum-shaped cobalt-boron species in the gas phase, CoB16–, which set a record for highest coordination number in a molecule. The sandwich complex created by Alexander I. Boldyrev of Utah State University, Lai-Sheng Wang of Brown University, and their colleagues consists of two B8 rings connected to the central cobalt atom via 16 bonds, the theoretical maximum based on the number of available atomic orbitals (Nat. Commun. 2015, DOI: 10.1038/ncomms9654). The researchers made the molecular drum by vaporizing a cobalt-boron target with a laser and then isolating CoB16– clusters from the product mixture and analyzing them spectroscopically and computationally.

By virtue of synthesizing a stable B3 ring, inorganic chemists prepared the lightest aromatic species that is experimentally possible this year. The sandwich molecule made by Thomas Kupfer, Holger Braunschweig, and Krzysztof Radacki of Julius Maximilian University Würzburg contains two triboracyclopropenyl dication rings connected by sodium ions. The new species could serve a practical purpose as the first of a family of precursor compounds for preparing semiconducting, superconducting, and magnetic materials (Angew. Chem. Int. Ed. 2015, DOI: 10.1002/anie.201508670). The Würzburg team showed through computational, spectroscopic, and electrochemical studies that the B3 ring has an electronic structure consistent with classical aromatic carbon compounds, such as the cyclopropenyl cation and benzene.

Organic electron donors with exceptionally negative redox potentials have emerged as useful reagents in organic synthesis to complement traditional metal-based reducing agents. Chemists led by John A. Murphy of the University of Strathclyde and C. Adam Dyker of the University of New Brunswick pushed this class of compounds to a new level by creating a tetra(iminophosphorano)-substituted bispyridinylidene that has a record redox potential of –1.70 V, surpassing the previous record by about 0.2 V (Angew. Chem. Int. Ed. 2015, DOI: 10.1002/anie.201505378). The two-electron donor molecule, which can be used in multigram-scale reactions, is the first reagent strong enough to reduce recalcitrant malononitriles (shown) and sulfonamides without light-driven photoexcitation.