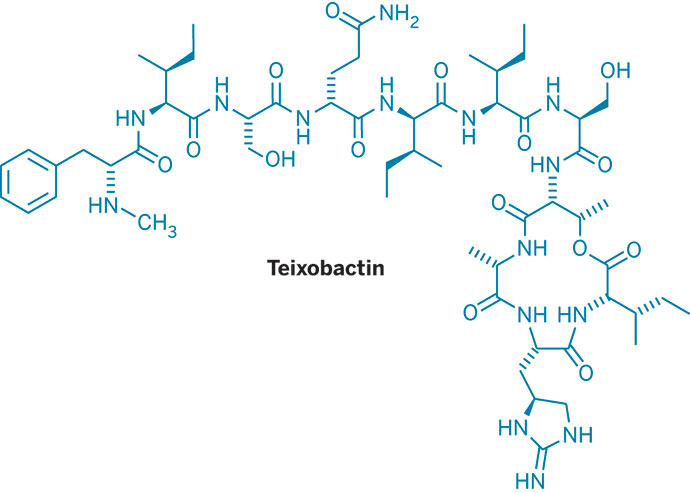 Many of the antibiotics doctors prescribe to fight bacterial infections were first unearthed as the products of microorganisms in the soil. But only about 1% of environmental microorganisms will grow in a laboratory petri dish. The other 99% are considered unculturable. Wondering what treasure trove of useful compounds might be waiting to be discovered, researchers led by biologist Kim Lewis at Northeastern University developed a screening method that coaxes unculturable bacteria to grow. Lewis and his team add small amounts of bacteria to a culturing device called an iChip, place the gadget between two semipermeable membranes, and then bury it all in the soil for a week or two. Using this method, the researchers discovered the bacteria-fighting compound called teixobactin (Nature 2015, DOI: 10.1038/nature14098). The compound, a macrocyclic depsipeptide, represents a new class of bacteria fighters because it is a potent killer of gram-positive pathogens and is effective against methicillin-resistant Staphylococcus aureus and Streptococcus pneumonia in mice. Although there are a handful of new classes of antibiotics in the pipeline, the last antibiotic from a new class to be approved by FDA was Sirturo (bedaquiline), a narrow-spectrum tuberculosis fighter discovered in 1997. Lewis’s team reports that teixobactin’s novel mechanism of action makes it tough for bacteria to develop resistance to the compound. “We have sent teixobactin to a large number of laboratories, including those specifically aimed at obtaining resistant mutants. No mutants so far,” Lewis tells C&EN. The compound is currently in preclinical development with NovoBiotic Pharmaceuticals, a company that was part of the compound’s discovery.

[+]Enlarge
Credit: TK
Discovery of antibacterial classes has fallen off in recent decades.

Natural Products
Fungus fighter from the sea
Antibiotics
Novel antibiotic discovered in the guts of worms
Natural Products
New antibacterial structures feature rare amino acid﻿
Share X
To send an e-mail to multiple recipients, separate e-mail addresses with a comma, semicolon, or both.
Title: Digging In The Dirt Yields Novel Bacteria Fighter
Author: Bethany Halford
Chemical & Engineering News will not share your email address with any other person or company.