[+]Enlarge
Credit: Jungwon Park/Harvard U
The riblike structures seen here depict atomic planes in a platinum nanoparticle (2 nm in diameter), imaged as it drifted and rotated in solution. 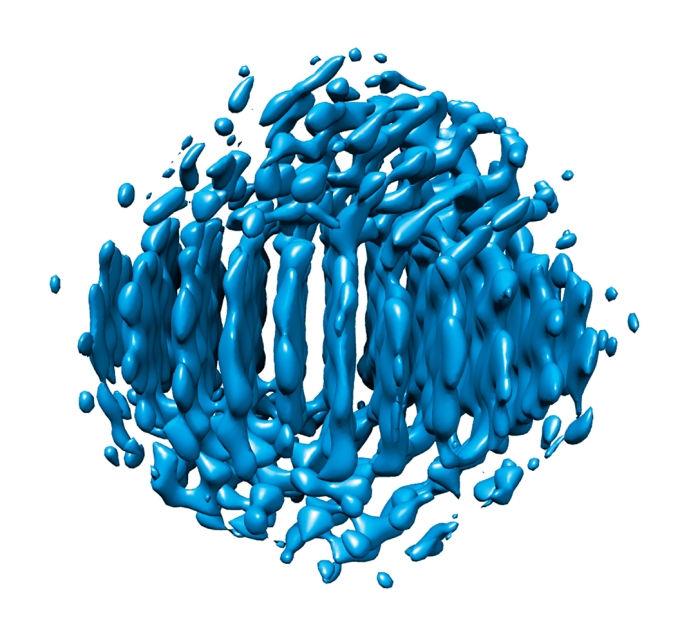 Credit: Jungwon Park/Harvard U
The riblike structures seen here depict atomic planes in a platinum nanoparticle (2 nm in diameter), imaged as it drifted and rotated in solution.

With the ability to zoom in on materials by a magnifying factor of more than 1 million times, transmission electron microscopy is an indispensable tool for chemists, biologists, and materials scientists who study atomic-scale structure and composition. TEM displayed its power this year by providing researchers with views of complex biomolecules and colloidal particles at a level of detail never seen before. In one case, scientists reported an advance in biomolecule structure determination through cryo-EM, a TEM technique that involves freezing and analyzing samples that cannot be crystallized. A group led by Irina Gutsche of France’s National Center for Scientific Research determined the three-dimensional structure of the protein shell that encases and protects the measles virus (Science 2015, DOI: 10.1126/science.aaa5137). That result may lead to new types of antiviral drugs for measles and other diseases. Researchers were also able to image biomolecules that crystallize but do so at a size one-millionth that required for conventional X-ray crystallography. Tamir Gonen of Howard Hughes Medical Institute’s Janelia Research Campus, David S. Eisenberg of the University of California, Los Angeles, and coworkers used a TEM-based technique called microED to analyze tiny aggregates of two peptides from α-synuclein that play key roles in Parkinson’s disease (Nature 2015, DOI: 10.1038/nature15368). On another front, a team led by A. Paul Alivisatos and Alex Zettl of UC Berkeley demonstrated a method for generating 3-D views of tiny particles moving around in liquid, a condition that normally prevents high-resolution imaging (Science 2015, DOI: 10.1126/science.aab1343). The team trapped droplets of platinum particles in a nanosized graphene bubble and recorded short-exposure images of the individual colloidal particles. Then they applied a computational technique to generate 3-D reconstructions of randomly moving particles. Earlier efforts in nanoparticle imaging relied on immobilized samples. Because the method provides a way to study colloids in their native state, it offers a direct means for probing particle dynamics in catalysis and materials synthesis.

[+]Enlarge
Credit: Science
This cryo-EM image reveals a cross-section of the measles virus capsid: The virus RNA (green) winds around an interior helical core (salmon and yellow) and is protected by an exterior helical shield (blue).