Flexible Electronics You Can Inject 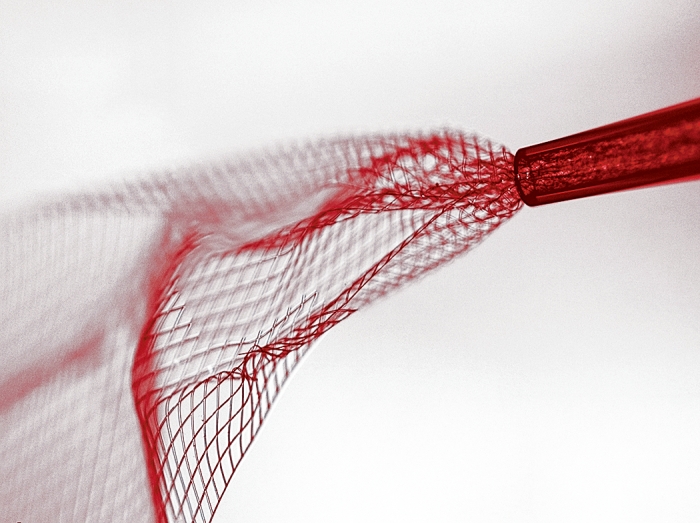 Flexible Electronics You Can Inject

Implanting electronics in the brain to measure electrical activity or to deliver stimulating pulses sounds dangerous. But this year researchers at Harvard University developed a potentially minimally invasive way to safely deliver devices to brain tissue with a simple injection. The Food & Drug Administration already has approved brain implants that generate electrical pulses to treat symptoms of Parkinson’s disease and other disorders. One problem with those devices is that they aren’t as flexible as brain tissue. So when the brain jostles in the skull, the implants rub against the tissue, triggering damaging immune reactions that lead to scarring around the device’s electrodes. Over time, this scar tissue diminishes the implant’s effectiveness. In June, Harvard’s Charles M. Lieber and colleagues reported centimeter-wide mesh electrodes that are up to 1 million times as flexible as previously reported devices (Nat. Nanotechnol. 2015, DOI: 10.1038/nnano.2015.115). The 0.8-µm-thick, chicken-wire-like electrodes consist of gold wires encapsulated by a biocompatible epoxy-based polymer. The researchers readily suck them up into a syringe and inject them into mouse brains. The team has seen no signs of immune reactions at least a month after injection. In August, Lieber and coworkers reported a controlled method for injecting the electrodes that allows the mesh to unfold into brain tissue, and they disclosed a way to connect the mesh electrodes to monitoring and control electronics outside the brain using a printable, conductive ink (Nano Lett. 2015, DOI: 10.1021/acs.nanolett.5b02987).

[+]Enlarge
Credit: Nat. Nanotechnol.
To inject a mesh electronic into tissue, researchers push a needle to the desired depth (left). They eject the device at the same rate as they withdraw the needle, allowing the mesh to unfold (center). This draws a piece of the device outside the tissue (right) for connection to external electronics.

Credit: Nat. Nanotechnol.
To inject a mesh electronic into tissue, researchers push a needle to the desired depth (left). They eject the device at the same rate as they withdraw the needle, allowing the mesh to unfold (center). This draws a piece of the device outside the tissue (right) for connection to external electronics.

C&EN polled readers about what they thought was the most notable research of the year. Of the options available, these flexible electronics got the most votes. To see the full results, go to cenm.ag/vote2015.