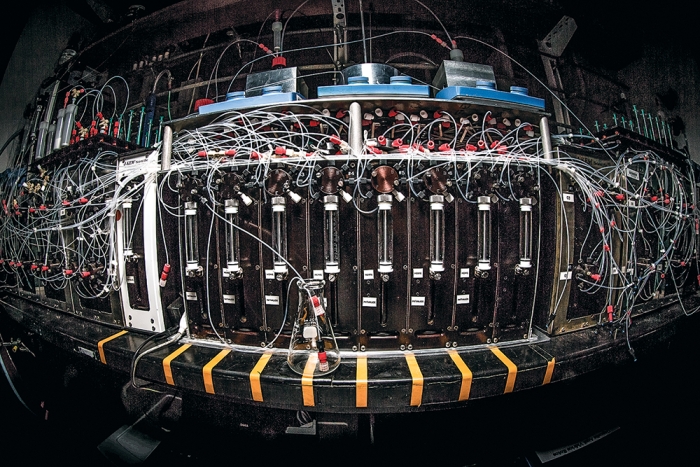 This year saw the advent of a new type of automated synthesizer that, with the push of a button, could produce a broad range of drugs, molecular probes, and molecular electronic components. Martin D. Burke of the University of Illinois, Urbana-Champaign, and coworkers developed the exotic-looking machine, which uses common chemical reactions to assemble modular building blocks into targeted organic molecules on demand (Science 2015, DOI: 10.1126/science.aaa5414). A company cofounded by Burke, Revolution Medicines, has already improved the technology and is using it for drug discovery. “The synthesis and purification of small organic molecules are still hard to automate,” comments Kenichiro Itami of Nagoya University. “Almost all synthetic chemists, including myself, have been dreaming to achieve this because it will offer significant opportunities to rapidly identify functional small molecules.” Burke’s synthesizer was designed to use organic building blocks his group developed containing boronic acids protected by methyliminodiacetic acid (MIDA)—so-called MIDA boronates. More than 100 examples of MIDA boronates are now commercially available. By using iterative rounds of Suzuki-Miyaura cross-coupling, a palladium-catalyzed C–C bond-forming reaction, the team adds one MIDA-boronate-protected building block to another to assemble the target molecule. At each step along the way, the intermediate compounds are purified by immobilizing them on silica gel, washing away excess reagents and by-products, and releasing the intermediate for the next synthetic step. The team has used the system to make a variety of compounds, including complex macrocyclic and polycyclic natural products. Continued development of the platform “will advance its power to support directed chemical diversification and thus enable drug discovery with compounds of heightened chemical complexity,” Burke says.