Nickel Shines As A Catalyst

Organic Synthesis: Research advances continued a trend to move away from precious-metal catalysts

Nickel Shined As A Catalyst

Transition-metal-catalyzed reactions are wildly successful in organic synthesis, in particular for cross-couplings that construct carbon-carbon and carbon-heteroatom bonds. Palladium catalysts have dominated these reactions, but chemists are interested in switching to more abundant, lower-cost metals such as iron, nickel, and other first-row metals. In 2015, nickel continued to shine in this role as chemists coaxed it to carry out a broader array of reactions. In one example, Mark Stradiotto and coworkers of Dalhousie University reported the first case of nickel-catalyzed arylation of ammonia—the simplest and most abundant N–H source in chemistry—to make amines. The researchers used air-stable Ni(cyclooctadiene)2 or NiCl2(dimethoxyethane) with a ferrocenyl phosphine ligand known as JosiPhos to link up substituted aryl and heteroaryl bromides, chlorides, and tosylates with ammonia to make diverse aryl and heteroaryl amines (Angew. Chem. Int. Ed. 2015, DOI: 10.1002/anie.201410875). In another example, a team led by Kendall N. Houk and Neil K. Garg at the University of California, Los Angeles, developed a nickel cyclooctadiene/N-heterocyclic carbene catalyst that makes short work of cleaving and modifying normally unreactive amide functional groups (Nature 2015, DOI: 10.1038/nature14615). Garg’s group capitalized on the approach by achieving the first nickel-catalyzed Suzuki-Miyaura reaction using an amide derivative as a cross-coupling partner (Nat. Chem. 2015, DOI: 10.1038/nchem.2388). Researchers have also been discovering methods that couple nickel catalysts with other catalysts to perform new chemistry. In one twist on cross-coupling, Daniel J. Weix and his group at the University of Rochester reported pairing a nickel bipyridine catalyst that reacts with aryl bromides and a palladium phosphine catalyst that reacts with aryl triflates. The surprising result was the first general method for making unsymmetrical biaryl compounds directly from two different aryl electrophiles (Nature 2015, DOI: 10.1038/nature14676). “Using nickel is especially advantageous nowadays,” Chris H. Senanayake, vice president of chemical development at Boehringer Ingelheim Pharmaceuticals, told C&EN. “There is a dramatic shift taking place in industrial process chemistry from palladium to non-precious-metal catalysis.”

[+]Enlarge
Nickel-catalyzed arylation of ammonia enables the synthesis of a variety of aryl and heteroaryl amines, such as in the reaction shown.

Nickel-catalyzed arylation of ammonia enables the synthesis of a variety of aryl and heteroaryl amines, such as in the reaction shown.
[+]Enlarge
A collaborative catalyst approach to coupling two aryl electrophiles, which typically don’t combine, provides a general method for making unsymmetrical biaryl compounds (one example shown). 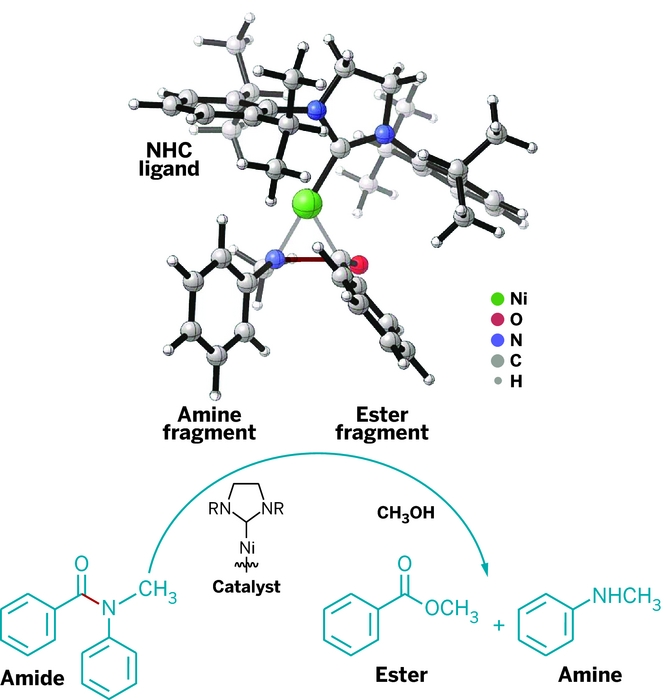 Synthesis
Crafty Cobalt Polyborylations
Synthesis
Amides Succumb To Suzuki–Miyaura Coupling, Thanks To Nickel Catalyst
Synthesis
An Alkene Carboamination
Share X
To send an e-mail to multiple recipients, separate e-mail addresses with a comma, semicolon, or both.
Title: Nickel Shines As A Catalyst
Author: Stephen K. Ritter
Chemical & Engineering News will not share your email address with any other person or company.