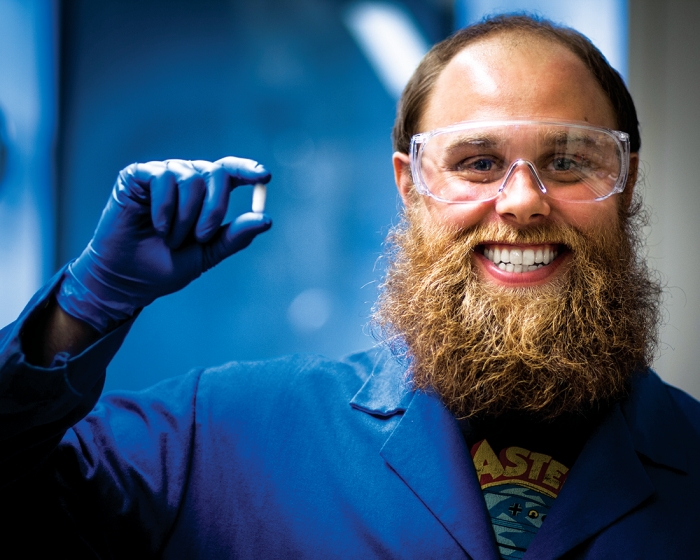 Credit: Pedro L. Arrechea
Sather holds one of the paraffin capsules loaded with a sensitive reagent.

For chemists who regularly wrestle with ornery reagents in a glove box, life got a little easier this year. Researchers led by Massachusetts Institute of Technology’s Stephen L. Buchwald reported a simple method for making protective paraffin capsules that hold premeasured doses of air- and moisture-sensitive chemicals (Nature 2015, DOI: 10.1038/nature14654). Once filled, the capsules can be stored outside the glove box and dropped into reaction vessels when needed. After being added to a reaction mixture and heated, the capsules release their contents. The paraffin, which doesn’t interfere with the reaction, can be removed after workup via filtration or chromatography. Creating the capsules is easy, says postdoctoral researcher Aaron C. Sather, who developed the method: One simply dips the end of a glass stir rod into melted paraffin several times to create a hollow tube with one sealed end. Once the wax capsule cools, it can be removed, loaded with reagents, and sealed at the other end with a heated metal spatula. The MIT team found that the capsules can sit on a benchtop for more than a year in some instances and can even be submerged in water overnight without losing their potency. Although no company sells the capsules yet, Buchwald tells C&EN he’s interested in seeing them commercialized.