Increasingly, wastewater from oil and gas operations is pumped into the ground for disposal, and the pressure it creates might be causing small earthquakes, says a report released by EPA.

[+]Enlarge
Credit: AP
Seismic monitoring in some communities that are near hydraulic fracturing operations, including Reno, Texas, shown, reveals small to moderate earthquakes. 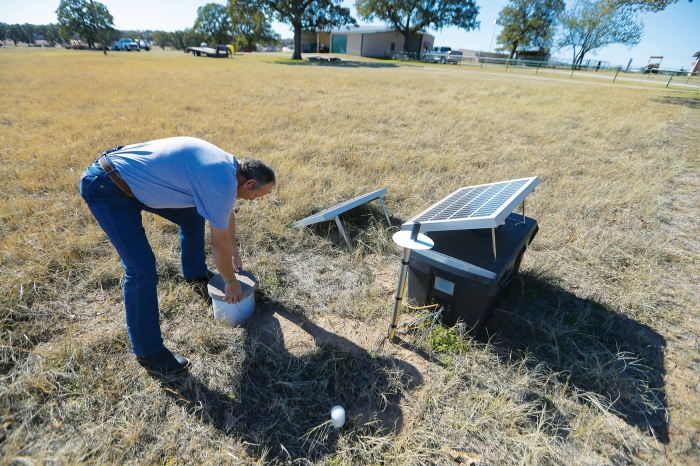 Credit: AP
Seismic monitoring in some communities that are near hydraulic fracturing operations, including Reno, Texas, shown, reveals small to moderate earthquakes.

Concern about a connection between wastewater injection and seismic activity arose following a series of earthquakes in 2011, says Peter C. Grevatt, director of EPA’s Office of Ground Water & Drinking Water. “We thought it was very timely to ask a group of experts to look into this issue.”

The report was prepared by the Underground Injection Control National Technical Workgroup, a group of regional and state experts.

Advanced oil and gas recovery techniques, which include horizontal drilling and hydraulic fracturing, bring ancient seawater to the surface along with oil and gas. At the surface, the brine and other wastes are separated from the economically valuable hydrocarbons. The water’s high salinity renders it too expensive to treat and discharge at the surface. Instead, it is often injected into deep wells for disposal. Over time, as pressure builds underground, release through ground-shaking tremors is possible, researchers say.

“Where individual cases of suspected induced earthquakes have been studied, the common denominator has been one or more high-volume injections wells,” says William L. Ellsworth, a seismologist with the U.S. Geological Survey, who is not a member of the workgroup.

The workgroup studied sites where wastewater injection is suspected of causing small to moderate earthquakes. It evaluated earthquake history, the proximity of disposal wells to these events, and the behavior of the wells.

A series of Oklahoma quakes in 2011 with magnitudes greater than 5.0 brought attention to a possible connection between hydraulic fracturing and induced earthquakes. A recent study called one of these earthquakes, with a magnitude of 5.7, the largest yet associated with wastewater injection (J. Geophys. Res. 2014, DOI: 10.1002/2013jb010612).

The report offers guidance to state and federal officials who want to minimize and manage seismic activity that might be a result of injection, the agency says.

Pollution
Satellites can now see air pollution inequality within cities
Persistent Pollutants
Goodbye to some PFAS in food packaging
Pollution
Mercury makes it deep into marine trenches
Share X
To send an e-mail to multiple recipients, separate e-mail addresses with a comma, semicolon, or both.
Title: Earthquakes and Fracking Activities Linked In Environmental Protection Agency Report
Author: Jessica Morrison
Chemical & Engineering News will not share your email address with any other person or company.

Comments
Enviro-Equipment, Inc. (February 13, 2015 2:30 PM)
The link between hydraulic fracturing and mild to moderate earthquakes has pretty much been established for the past couple of years now. However, even the worst case scenario earthquake only reached 5.7 Richter. Environmentalists who seek to use increase earthquake activity with shutting down this drilling method that produces so much energy as well as US economic activity are chasing a red herring.
Reply »

So far. Just like the guy who makes his living picking up dollar bills lying in front of a steamroller has a good life, until he doesn't. What are the odds that fracking causes a 7.5 rather than a 5.7? How do we internalize this risk onto the frackers, ensuring that they can and do pay for the damage such a quake would cause?

Allowing people to put other peoples' property at risk without a robust, unsubsidized and ensured compensation mechanism is not "free market", it is theft.

Russell Bimber, age 86, in good health. (February 19, 2015 7:30 AM)
The work of David Evans, at the Colorado School of Mines, ca 1960, proved the connection between waste injection and earthquakes near Denver. He was probably the first to prove this connection beyond any reasonable doubt.

I worked as a research chemist for Diamond Alkali, Diamond Shamrock, and successor companies for 40 years, retiring in 1991, followed by four years of occasional consulting for them. The companies participated in at least four international Symposia on salt, including numerous cases of ground subsidence due to brining salt out of deep underground strata.
Also, in January 1986, there was a 4.9 earthquake south of the Perry Nuclear Power Plant that was probably triggered by a chemical waste disposal nearby that had been overlooked in the Final Environmental Statement related to construction of the PNPP.

I helped draft the Emergency Response Plan for PNPP, and was surprised to receive a check to thank me for my help.

For a few years, I volunteered as Lake County's Radiation Safety Officer, working with the Lake County Health Department, for possible response to offsite emergencies due to the PNPP, at the suggestion of the utility.

Mark P. (February 16, 2015 8:55 PM)
What's happening here is the release of stress already in the rocks. Water is acting as a lubricant and the rocks slide a little more easily past each other. A 5.7 now is helping prevent a 7.5 later. Be grateful.
Reply »

John A. (February 24, 2015 1:26 AM)
Mark P. is correct on the mechanism of the induced earthquakes. But ... It would be great news if a M5.7 earthquake could, with assurance, be considered a safety valve by relieving a large fraction of the pre-existing stress. For natural, tectonic earthquakes, this idea would be definitely rejected by seismologists. Small earthquakes are not a safety valve because there aren't enough to relieve enough stress on a fault capable of causing a M7.5 earthquake. Small earthquakes are a reminder that larger events might occur.
Reply »