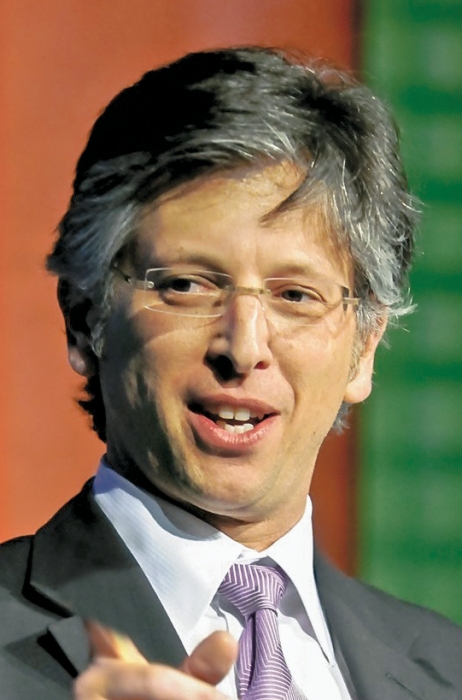 Some scientists’ areas of expertise are tough to explain to nonscientists. Not so for Paul S. Weiss. To put it simply, the Distinguished Professor of Chemistry & Biochemistry and of Materials Science & Engineering at the University of California, Los Angeles, works in a molecular playland. For more than 20 years,Weiss has been manipulating, imaging, and investigating the properties of individual atoms and molecules on surfaces. And he has built and studied the operation of tiny electronic and mechanical devices based on single molecules and self-assembled monolayers (SAMs) of molecules.

In a series of seminal studies in the 1990s, Weiss and coworkers disproved commonly accepted views about SAMs—namely that the molecules adsorb randomly, irreversibly, and permanently on the materials they’re coating. The techniques Weiss’s group developed in those studies became common tools for organizing SAMs and controlling surface dynamics.

The team also resolved key questions and controversies regarding the mechanisms that govern the actions of single molecules at interfaces. To answer those questions, Weiss’s group conducted experiments on single-molecule conductivity that showed how measurement differences were tied to SAM defects. They also demonstrated methods for eliminating those defects. Those results are credited with stimulating important developments in molecular devices, including new types of molecular switches.

Throughout his scientific career, Weiss has worked to expand the applicability and chemical specificity of scanning probe microscopy methods. He and his group continue to use these tools to advance the study of catalysis, molecular self-assembly, and nanoscale patterning and fabrication at ever-finer scales.

The significance of Weiss’s contributions is widely recognized by his colleagues. As the University of Michigan’s Nicholas A. Kotov puts it, Weiss’s work “is characterized by creativity, insight, and focus on the critical issues of surface science.” Kotov, an expert in nanoscale materials, adds that Weiss has developed “the most precise and versatile tools for molecular patterning known today.”

Weiss, 55, completed bachelor’s and master’s degrees in chemistry at Massachusetts Institute of Technology. In 1986, he finished his Ph.D. studies at UC Berkeley and then served as a postdoctoral researcher at Bell Laboratories for two years. From 1988 to 1989, he conducted research at the IBM Almaden Research Center, and he then began an academic career at Pennsylvania State University, where he was eventually named Distinguished Professor of Chemistry & Physics. He moved to UCLA in 2009.

Weiss’s accomplishments in scientific publishing are also noteworthy. He has published more than 250 scholarly journal articles and holds more than 20 patents. He has served as senior editor of Electron Device Letters, an Institute of Electrical & Electronics Engineers publication, and is the founding editor-in-chief of the highly acclaimed and award-winning journal ACS Nano.

Weiss will present his award address before the Division of Colloid & Surface Chemistry.