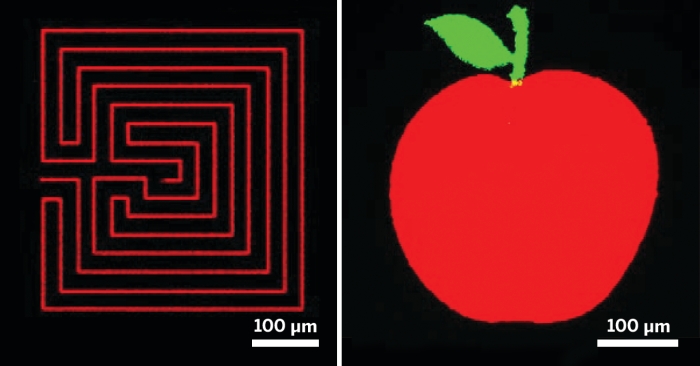 Researchers report a high-resolution method for printing quantum dots to make light-emitting diodes (Nano Lett. 2015, DOI: 10.1021/nl503779e). With further development, the technique could be used to print pixels for richly colored, low-power displays in cell phones and other electronic devices.

Quantum dots are appealing materials for displays because engineers can finely tune the light the semiconducting nanocrystals emit by controlling their dimensions.

Electronics makers already use quantum dots in some backlit displays on the market, in which red and green quantum dots convert blue light from a light-emitting diode (LED) into white light. Quantum dots also emit light in response to voltage changes, so researchers are looking into using them in red, green, and blue pixels in displays that wouldn’t need a backlight.

Quantum dot LED displays should provide richer colors and use less power than the liquid-crystal displays (LCDs) used in many flat screens, which require filters and polarizers that reduce efficiency and limit color quality. But it’s not yet clear how quantum dot LED displays would be made commercially, says John A. Rogers, a materials scientist at the University of Illinois, Urbana-Champaign. In 2011, researchers at Samsung made the first full-color quantum dot LED display by using a rubber stamp to pick up and transfer quantum dot inks (Nat. Photonics, DOI: 10.1038/nphoton.2011.12). As a manufacturing strategy, printing from ink nozzles would offer more flexibility to change designs on the fly, without the need for making new transfer stamps. Jet printing also would require less material, Rogers says.

Unfortunately, the resolution of conventional ink-jet printers, which use a heating element to force vapor droplets out of a nozzle, is limited. “It’s hard to get droplets smaller than about 25 µm,” Rogers says, because the smaller the nozzle diameter, the more pressure required to get the droplet out. So for the past seven years, Rogers has been developing another method called electrohydrodynamic jet printing. This kind of printer works by pulling ink droplets out of the nozzle rather than pushing them, allowing for smaller droplets. An electric field at the nozzle opening causes ions to form on the meniscus of the ink droplet. The electric field pulls the ions forward, deforming the droplet into a conical shape. Then a tiny droplet shears off and lands on the printing surface. A computer program controls the printer by directing the movement of the substrate and varying the voltage at the nozzle to print a given pattern.

The Illinois researchers used this new method, including specialized quantum dot inks, to print lines on average about 500 nm wide. This allowed them to fabricate red and green quantum dot LEDs. They also showed they could carefully control the thickness of the printed film, which is difficult to do with stamp transfer and ink-jet printing methods.

The ultimate resolution possible with these kinds of printers is very high, says David J. Norris, a materials engineer at the Swiss Federal Institute of Technology (ETH), Zurich. Last year, Norris used a similar printing method to print spots containing as few as 10 quantum dots (Nano Lett. 2014, DOI: 10.1021/nl5026997). He says it’s even possible to place single quantum dots using electrohydrodynamic nozzles, albeit with less control and repeatability. Single-particle printing isn’t needed for making pixels for displays, but it is useful for studying other kinds of optical effects in quantum dots, he says.

Comments
Maron Raymon (February 4, 2015 10:21 AM)
In talking about "in which red and green quantum dots convert blue light from a light-emitting diode (LED) into white light." Are they saying that a "blue light" spectrum is filtered to create a "white light" spectrum.