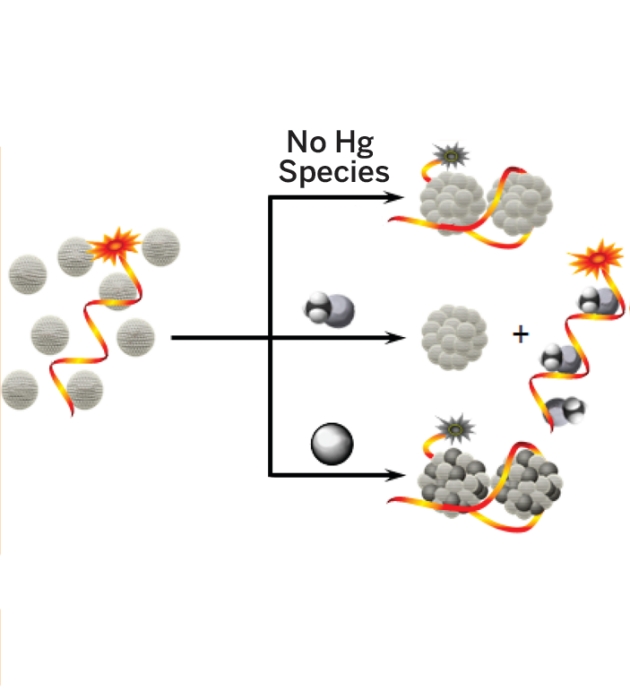 More harmful than other forms of mercury, methylmercury is soluble in lipids, which enables it to breach the blood-brain barrier more readily. In aquatic ecosystems, mercury-containing substances accumulate as fish eat smaller organisms that have already ingested the element. Methylmercury can become a health concern as people eat some types of fish, especially tuna and swordfish, which are high on the food chain.

But precisely measuring methylmercury in fish is tough. Separating methylmercury from other forms of mercury requires techniques such as gas chromatography or high-performance liquid chromatography, which can be cumbersome and time-consuming. Seeking a more convenient approach, Li Deng and Ronghua Yang of Hunan University, in China, and colleagues devised a fluorescence-based method that could measure the concentration of methylmercury while ignoring ionic mercury, without any separation steps.

For fluorescent probes, the team designed DNA strands labeled with carboxyfluorescein dye that has a glow that is enhanced when bound to methylmercury. To create a molecular off-switch, the researchers add silver ions that sop up ionic mercury into Hg-Ag clusters, which then bind to the DNA strands and quench their fluorescence. The silver ions also form nanoparticles that quench the residual fluorescence of any unbound DNA strands. As a result, the researchers say, the intensity of the glow from a sample offers a way to measure methylmercury accurately, regardless of ionic mercury’s presence.

When the researchers tested the concentration of mercury extracted from tuna and compared their method with a traditional method, they measured 5.8 μg of methylmercury per g of tissue using fluorescence, which was similar to the 5.5-µg/g value with the traditional test. Separate fluorescence analyses on three common types of fish—snakehead, bighead carp, and grasshead carp—showed higher concentrations in the more carnivorous fish, consistent with how methylmercury accumulates as fish move up the food chain.

The findings are a good first step, says Yingfu Li, a biochemist at McMaster University, in Ontario, and they’re a novel application of fluorescent DNA probes, which are often used in medical diagnostics.

The biggest limitation right now is its selectivity for methylmercury, Li says, which might not be enough for some samples. Improvements there would allow researchers to measure methylmercury levels even if ionic mercury content is more than 50-fold higher. Additionally, Li wonders if researchers someday could develop a portable, easy-to-use colorimetric test for methylmercury similar to a home pregnancy test.