Gauging The Carbon Cost Of Fuel From Canadian Oil Sands

Environment: New study finds that greenhouse gas emissions associated with fuel from Alberta oil sands are about 20% greater than those for U.S. crude oil 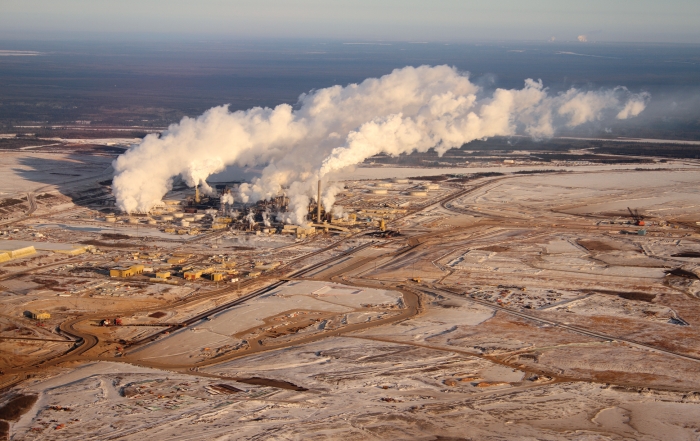 The oil sands of Canada’s Alberta province are one of the world’s largest oil reserves, currently producing the equivalent of 2 million barrels of crude oil per day. But it takes lots of energy to transform the heavy bitumen in the deposits, which is bound up with sand and clay, into diesel and gasoline. A new study presents a comprehensive analysis of the greenhouse gas emissions associated with fuels from the oil sands—from extracting to shipping to refining to burning—and concludes that emissions are about 20% greater than those from fuels produced from conventionally extracted crude oil in the U.S. (Environ. Sci. Technol. 2015, DOI: 10.1021/acs.est.5b01255).

Currently, only about 9% of crude oil processed by refineries in the U.S. comes from the Canadian oil sands, but analysts project that this share will grow in the future, especially if long-distance pipeline projects such as Keystone XL go forward. Researchers want to understand the carbon footprint of these fuels to help assess their impact on climate, and to track progress toward emission reduction targets. So Hao Cai of Argonne National Laboratory and his colleagues set out to determine the greenhouse gas emissions associated with all the steps involved in production and use of oil sands products refined in the U.S., often called a “well to wheels” life-cycle assessment.

Previous assessments have suffered from limited, proprietary data or were based on less energy-efficient oil production processes than those used today. In the new study, the researchers used publicly available monthly operations data from 27 oil sands projects between 2008 and 2012 and assessed emissions using a model developed at Argonne. The operations data allow the model to estimate emissions resulting from powering the machinery needed to extract oil from the sands, heating steam used in the process, and even from bacteria giving off carbon dioxide and methane in wastewater ponds.

The journey from well to wheels begins with extraction. In surface mining, oil companies use trucks to dig up shallow sands, rinse them with hot water, and shake the mixture to separate out the bitumen. For deeper deposits, they drill wells and inject steam to separate the bitumen from the sands, and then pump it out—a method called in situ recovery. Once the heavy bitumen is recovered, it is diluted with lighter hydrocarbons so it can be more easily transported to a refinery or partially refined on-site into a mixture called synthetic crude.

With the model, the researchers considered four different production scenarios—using either surface mining or in situ recovery for production of either bitumen or synthetic crude oil. Each scenario included pipeline transportation to the U.S., refinement into gasoline or diesel, and combustion.

The team found that gasoline and diesel production from oil sands yielded, on average, about 20% greater emissions than fuel production from conventional crude oil, similar to previous estimates. The most intensive emissions came from in situ recovery of synthetic crude oil and the least intensive from surface mining of bitumen. The most common methods used in the industry, in situ recovery of bitumen and surface mining of synthetic crude, each had about 20% greater emissions compared with conventional crude production.

“This study takes a significant step forward in comprehensiveness and quality of its life-cycle emissions estimates,” says David W. Keith, an expert in climate science and energy policy at Harvard University. This is a politically hot topic, he suggests, and the study “helps to provide an evenhanded look.”.

Pollution
Measuring microplastics in seafood
Water
Jessica Ray
Sustainability
Kevin Barnett
Share X
To send an e-mail to multiple recipients, separate e-mail addresses with a comma, semicolon, or both.
Title: Gauging The Carbon Cost Of Fuel From Canadian Oil Sands
Author: Deirdre Lockwood
Chemical & Engineering News will not share your email address with any other person or company.

Comments
Steve Swedberg (June 24, 2015 1:56 PM)
While it is always desirable to have a perfect plant or production operation, the fact is that there are going to be pluses and minuses to any endeavor. I believe we should work to minimize negative effects but remember that there is value in what is being extracted.

By the way, the picture associated with this article shows great clouds of steam rather than massive air pollution. Heat and moisture will do that!
Reply »

David Hrivnak (June 29, 2015 5:13 PM)
While I agree with your basic assessment we now have good alternatives. I power my electric car with fuel that is about $.80/gal. Then add to that thanks to rooftop solar I can make it myself and make it cleanly. Try that on any oil sand method.
Reply »

If these are similar to previous estimates, I guess I fail to see how this is news. Shouldn't the focus be on how to decrease this number not confirm it?
Reply »

Andrew Kaldor (June 24, 2015 6:55 PM)
I have not read the article referd here, but my comment relates to the base case comparison. US Gulf coast refineries use substancial amount of low cost heavy oil, much of which is comparable to bitumen delivered from Canada. The sources are Venezuela bitumen, Nigerian heavy crude, Chad heavy crude, the Mexian crude imported is also heavy, as isthe crude from Saudi Arabia. So the well to wheel analysis comparison should be with those kinds of crudes as feedstock. We already use substantial Canadian heavy oil/bitumen in the northern tier refineries today, from Illionis refineries to Montana refineries. I suspect that when we make like-to-like comparison the enhanced greenhouse gas conibution is much smaller.
Reply »