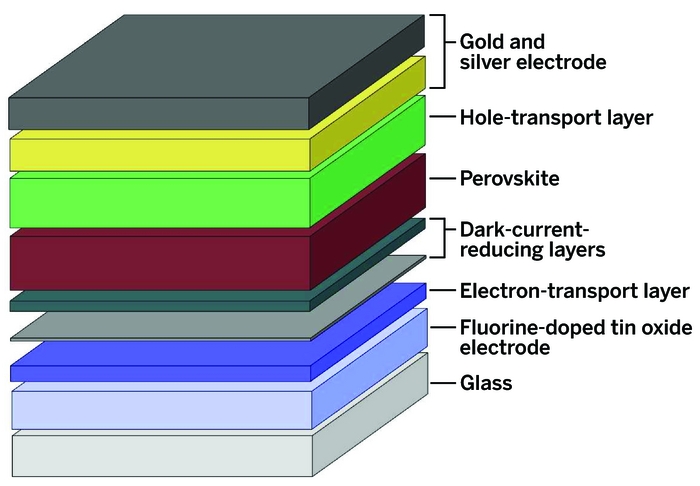 Engineers have improved the speed, sensitivity, and stability of perovskite-based light detectors by adding new material layers to the device (ACS Photonics 2015, DOI: 10.1021/acsphotonics.5b00164). The new device is as sensitive as the silicon-based light sensors found in digital cameras and 1,000 times as fast as sensors made of organic semiconductors or quantum dots.

Today’s photodetectors—used in imaging, sensing, and optical communication applications—are made of silicon and gallium nitride. Lead halide perovskites, which have become a huge focus of solar-cell research because of their remarkable ability to convert light to electricity, also hold promise for light detectors. The materials could form the heart of low-cost flexible sensors because, unlike other types of highly efficient photovoltaic materials, they are easily made from solution at low temperatures.

Edward H. Sargent, an electrical engineer at the University of Toronto, and his colleagues improved on previous perovskite photodetectors, which had top electrodes made of organic materials. Organic electrodes are sensitive and have a fast response time but can also be unstable, so their electric current response degrades over a few hours. The researchers instead used a conventional, more stable solar-cell architecture: a fluorine-doped tin oxide top electrode and a titanium dioxide electron-transport layer deposited on glass, followed by a perovskite layer, and capped with a hole-conducting layer and a gold and silver bottom electrode. This setup alone is stable but not fast or sensitive enough to compete with standard photodetectors.

To increase the speed and sensitivity, the researchers added a 1-nm aluminum oxide layer and a 10-nm layer of a fullerene derivative, phenyl-C61-butyric acid methyl ester (PCBM), between the perovskite and the TiO2. Photodetectors typically have a small leakage current called the dark current, which flows even when no light is hitting the device. Suppressing the dark current is crucial for increasing sensitivity, Sargent says, and that’s exactly what the aluminum oxide and PCBM layers do. The materials block the dark current from reaching the electrodes but can allow the much higher photocurrent through. Both layers also keep defects in the TiO2 surface from trapping electrons, thus increasing the speed of the device.

The device has a sensitivity comparable to commercial silicon photodetectors. It’s also fast, generating current in response to light in 1 microsecond, and its performance does not degrade after being illuminated for a week.

“Further reducing the dark current, perhaps through engineering other interfaces or materials in the device, will allow for improved sensitivity values,” Sargent says.

The high response speed and stability reported by the researchers make this work “a significant advance for developing high-performance hybrid perovskite photodetectors,” says Yang Yang, a materials scientist at the University of California, Los Angeles. The sensitivity is already good for practical use, he says, but “the most critical thing is to make the device stable enough for at least several years.”

Comments
Will Shore (July 16, 2015 9:07 PM)
Is there a simple description of perovskite structure which the average chemist can understand? "Organometallic metal halide" is a start.

Nidhi Pandey (February 19, 2017 1:46 PM)
Sir,
PCBM acting as a electron transport layer helps in reducing the dark current. i would just like to know something about interface engineering that could possibly done to further reduce dark current and hysteresis effect in perovskites.

Thanks and Regards
Reply »