Repairing The Heart With A Protein-Hydrogel Combo 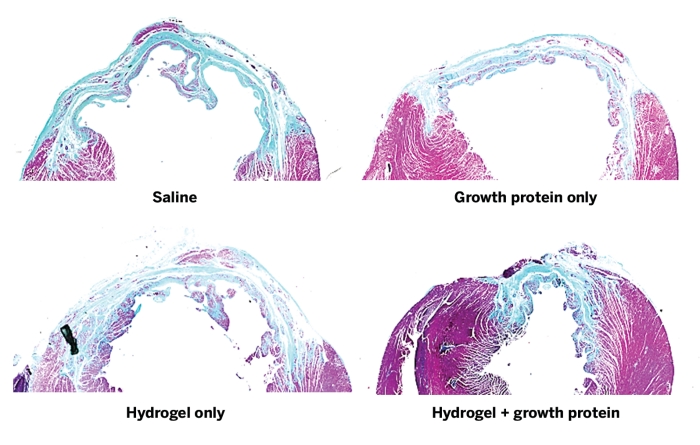 Even if a person survives a heart attack, the lack of blood flow damages tissue, which often leads to heart failure. Now researchers have developed a mixture of a growth protein and a biodegradable gel to prevent scarring and repair injured heart muscle. When injected at the site of a heart attack in rats, the cocktail limited cardiac tissue damage, the team reports (ACS Biomater. Sci. Eng. 2015, DOI: 10.1021/acsbiomaterials.5b00077).

The new strategy combines two experimental techniques for reviving heart tissue after a heart attack. One approach is to inject a scaffolding material to reinforce the weakened muscle wall. Another is to inject stem cells or growth factors to help repair the damaged tissue. On their own, these individual methods have shown limited success in clinical trials.

Injected growth factors show some promise, says Yadong Wang, a professor of bioengineering at the University of Pittsburgh, but they quickly break down or diffuse out of cardiac tissue.

So Wang, along with cardiovascular researcher Neil Hamer Davies of the University of Cape Town, in South Africa, and their colleagues devised a special trick to deliver a growth protein trapped within a hydrogel. The gel protects the protein, keeps it at the heart attack site, and supports the damaged walls of the heart right after a heart attack. They used a tissue-signaling protein called Sonic hedgehog that is known to protect cardiac cells and help them grow by inducing the formation of blood vessels.

The researchers mixed it with negatively charged heparin, which is a widely used anticoagulant, and a polycation, which attaches to the oppositely charged heparin molecules to form micrometer-sized liquid droplets.

Next, they combined the droplets with a polyethylene glycol gel. The gel targets the signaling protein to damaged tissue, Wang says, because it degrades in the presence of an inflammatory enzyme secreted after a heart attack.

To test the new strategy, the researchers induced heart attacks in rats, and divided the animals into four groups. One group got an injection of the new combination material at the site of the heart attack, while the others got injections of only the protein-containing droplets, only the hydrogel, or saline. After two and four weeks, echocardiograms showed that hearts treated with the combination therapy pumped more blood per beat. The team also examined cross sections of hearts removed four weeks after treatment. Rats treated with the hydrogel-protein combination had at least 25% less scar tissue than those in the other groups.

“This is a very original approach,” says Juan Carlos Chachques, director of cardiac surgery research at the University of Paris Descartes, in France. “Combining the active material with the hydrogel delivery vehicle is very important.”

If the material shows success in humans, Wang imagines that doctors could deliver it using a catheter or through a small opening in the chest wall. Because scar tissue after a heart attack is thin and can rupture, Chachques adds, the new material could also be delivered via a patch fixed on the diseased heart instead of injecting it into muscle.

Drug Delivery
Patch delivers drugs to eye
Materials
Medical Hydrogel Relies On Nanotech And A Hint Of Snake Venom
Materials
Self-Propelled Particles Trigger Clotting
Share X
To send an e-mail to multiple recipients, separate e-mail addresses with a comma, semicolon, or both.
Title: Repairing The Heart With A Protein-Hydrogel Combo
Author: Prachi Patel
Chemical & Engineering News will not share your email address with any other person or company.