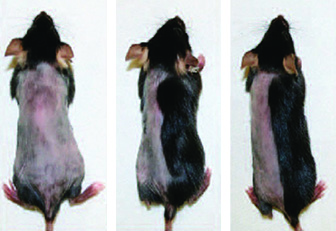 Credit: Sci. Adv.
When treated topically on the right sides of their shaved backs with ruxolitinib (center) and tofacitinib (right), mice robustly regrew hair compared with a control (left).

Although the idea of going bald typically conjures images of aging men, hair loss affects people of all genders and ages: Hair can fall out prematurely because of genetic predisposition, stress, drug side effects, or autoimmune disorders. A recent test of two FDA-approved drugs—ruxolitinib and tofacitinib—now suggests that a general treatment for all these hair loss conditions might be on the way (Sci. Adv. 2015, DOI: 10.1126/sciadv.1500973).

A team of researchers at Columbia University had observed that these drugs—approved for the treatment of myelofibrosis and rheumatoid arthritis, respectively—promoted hair growth when fed to mice but also impaired the animals’ immune systems. So the scientists were curious whether the compounds might work better when rubbed onto the rodents’ skin rather than when administered orally.

The team shaved the backs of mice at a point in the rodents’ lives when their fur was in telogen, the resting stage of a hair follicle’s growth cycle. In this stage, hair usually takes more than a month to begin growing back. But areas of a mouse’s skin treated topically with ruxolitinib or tofacitinib fully grew back in less than three weeks. Team leader Angela M. Christiano says the drugs are “basically accelerating what would normally happen several weeks later. They’re inducing new hair to begin to grow.” 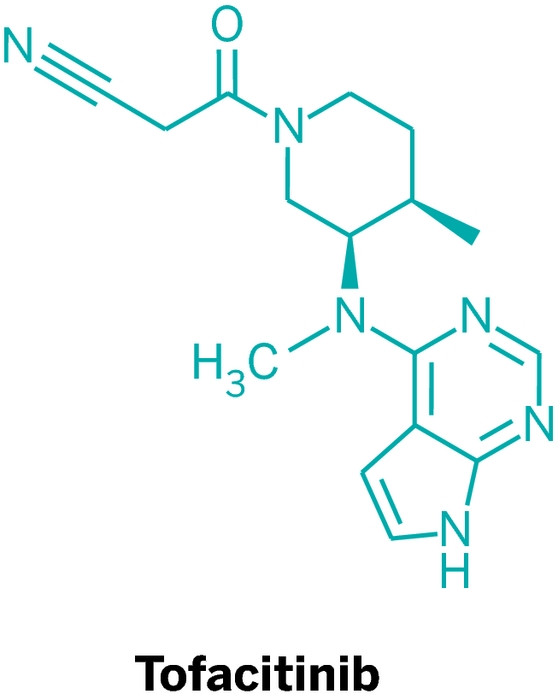 The Columbia team got similar results when they tested the compounds on human skin grafted onto mice. However, in this experiment, tofacitinib was significantly more effective.

The mechanism by which these drugs spur hair growth—at least in mice—appears to be very different from standard topical hair loss treatments such as Rogaine. A therapy for male-pattern baldness, Rogaine uses the active ingredient minoxidil, a vasodilator, to stimulate blood flow to hair follicles and thereby prevent hair from falling out. In contrast, the new topical treatments inhibit JAK-STAT signaling, a pathway involving Janus kinases that triggers cells to begin transcribing DNA or undertake other activity. Researchers believe this signaling pathway is most active when hair follicles, a type of stem cell, are at rest. When ruxolitinib and tofacitinib block the pathway, the follicles “wake up” and enter a new growth phase.

“The big news of this new paper is that JAK inhibitors are even more versatile in function than previously thought,” says Amy McMichael, professor of dermatology at Wake Forest Baptist Medical Center, who was not involved in the study. “Not only do they have a burgeoning role in treating inflammatory conditions, but there appears to be a direct effect on stem cells that can impact hair growth function.”

Because of this direct effect, the Columbia researchers believe the treatments may be useful in hair loss caused by a variety of problems, including alopecia areata, an autoimmune disease that affects millions in the U.S., or chemotherapy-induced hair loss. “For any clinical setting where the hairs are stuck in resting phase,” Christiano says, “this would be a way to think about coaxing them back into the hair cycle.”

When can we expect the drug to be in market's like India.
Does this drug usage need prior diagnosis by expert doctor ?
Reply »

Linda Casson (October 28, 2015 4:03 PM)
Very interesting! Seems like a different mechanism than minoxidil; would be interesting to see a comparison between minoxidil and these new drugs.
Reply »

Albert Baetz (October 28, 2015 8:52 PM)
I have alopecia totalis after recovering from a Listeria infection 30 years ago.
the dermatologist said that I had made an immune response to my hair follicile that cross reacted with a Listeria antigen. Hair growth has not returned even though you would predict that immunoglobulins would decrease with time. I wonder if these drugs would stimulate the folliciles to function again.
Albert Baetz, AandLBaeta@aol.com
Reply »

Michelle (October 29, 2015 4:05 PM)
Hello just wondering when more information on this drug will be available and what side effects would be and how soon will this medication be on the market?
Reply »

Judith Lavelle (November 2, 2015 10:30 AM)
The researchers will need to perform more experiments before they know whether topical JAK-inhibitors may be safe and effective for people—as mice and humans often react differently to these interventions. However, the Columbia group is currently running clinical trials for oral formulations of JAK-inhibitors in those diagnosed with alopecia areata: http://dermatology.columbia.edu/research/clinical_trials.html.
Reply »

Anonymous (December 4, 2015 2:38 PM)
Hi Judith, can I get some clarification? The title says FDA APPROVED DRUGS boost hair. This refers to ruxolitinib and tofacitinib. "FDA approved" sounds like the drug is ready to go to market in the US. Does "FDA approved" mean that the drugs are approved to be used in experiments or clinical trials instead? Just trying to get some understanding on where these drugs are at in the discovery to prescription process. Thanks. Super interesting article!
Reply »

Judith Lavelle (December 7, 2015 10:16 AM)
Good question! Ruxolitinib and tofacitinib are indeed FDA approved but only for the treatment of the autoimmune diseases myelofibrosis and rheumatoid arthritis, respectively. So while the drugs are already being used for these conditions, doctors will only be able to prescribe these drugs to patients with hair loss if and when regulatory agencies like the FDA positively review clinical trial data on how well the drugs address that specific problem. But because FDA approved drugs have already been evaluated for safety in humans, the entire approval process tends to take less time with such “repurposed” compounds.
Reply »

Anonymous (November 4, 2015 6:20 PM)
The researchers should have used a more appropriate animal model e.g. the nude mouse to test the effects of ruxolitinib and tofacitinib on hair growth. Nude mice are in fact not bald but instead show an 'abortive' reduced hair growth on different sites of the integument. regrowing hair on this model would provide a better demonstration than using normal, shave animals.
In humans, it will be interesting to demonstrate that treatment with these compounds could restore the hair line, which is notoriously difficult to treat with minoxidil.
Reply »

chris (November 22, 2015 10:59 AM)
Your article states that the effect of the drug is "basically accelerating what would normally happen several weeks later. They’re inducing new hair to begin to grow.” So it sound like this drug will help hair grow faster, but not necessarily grow hair where the follicles have died.
Reply »

Steve (December 1, 2015 11:33 AM)
Are these drugs prone to any side effects if used for a certain period. This also need to be researched.
Reply »