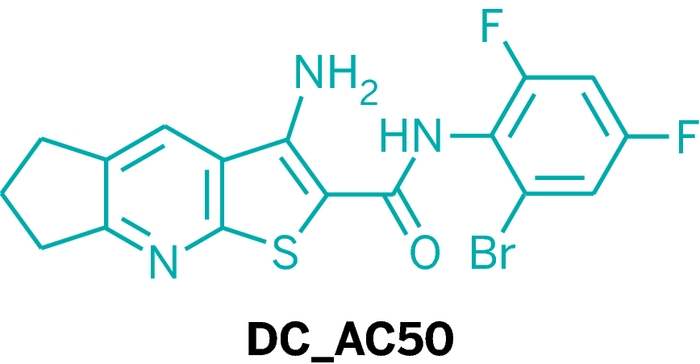 Normal cells shuttle around copper ions to keep key processes, such as energy production in their mitochondria, running smoothly. But cancer cells also use copper trafficking to grow and spread.

Jing Chen of Emory University School of Medicine, Hualiang Jiang of the Shanghai Institute of Materia Medica of the Chinese Academy of Sciences, Chuan He of the University of Chicago, and coworkers have now developed a selective way of blocking copper transport in cancer cells (Nat. Chem. 2015, DOI: 10.1038/nchem.2381). By screening a database of 200,000 druglike small molecules, the researchers discovered a promising compound, DC_AC50, for cancer treatment. They zeroed in on the compound by testing how well database hits inhibited a protein-protein interaction leading to copper transport and reduced proliferation of cancer cells.

Scientists had already found a molecule, tetrathiomolybdate, that interferes with copper trafficking and have tested it in clinical trials against cancer. But tetrathiomolybdate is a copper chelator: It inhibits copper transport in cells by nonselectively sequestering copper ions. Sometimes, the chelator snags too much copper, inhibiting essential copper-based processes in normal cells and causing side effects.

In contrast, DC_AC50 works by inhibiting interactions between proteins in the copper-trafficking pathway: It prevents chaperone proteins, called Atox1 and CCS, from passing copper ions to enzymes that use them to run vital cellular processes. Cancer cells are heavy users of Atox1 and CCS, so DC_AC50 affects cancer cells selectively.

Thomas O’Halloran of Northwestern University, who has studied tetrathiomolybdate, comments that “the challenge in drug design is hitting one of these copper-dependent processes without messing with housekeeping functions that normal cells depend upon. DC_AC50 appears to block the function of copper metallochaperone proteins without interacting directly with their cargo, copper ions. As the first member of a new class of inhibitors, it provides a new way to interrogate the physiology of copper trafficking disorders and possibly intervene.”

Comments
Michael Rogers (November 11, 2015 10:25 PM)
Your statement that DC_AC50, which is admittedly an interesting compound, is a promising compound for cancer treatment sounds suspiciously like hype. Dr. O'Halloran's comments are much more reserved as "possibly intervene." The teaser listed in the C&EN Newsletter email I received said it "could stamp out cancer." I worry about the numbing effect this kind of hype has, on the one hand, but perhaps more importantly, it greatly under appreciates the difficult work of those who try to move these leads to medical practice, the vast majority of which fail.
Reply »

Scott Hofmann (November 16, 2015 11:45 AM)
Wouldn't a simpler molecule like n-acetyl-cysteine-amide also do the job? Unfortunately, there is no patent for the molecule that I propose, but it is a great Cu ion scavenger as well.
Reply »