GOOD ON PAPER
[+]Enlarge
Credit: Reza Nosrati
On a paper-based DNA-analysis strip, wax sets the boundaries of a sample-loading region and a collection region (white circles). Electrical clamps apply a voltage that pushes a DNA sample (red) through the channel connecting the two regions. 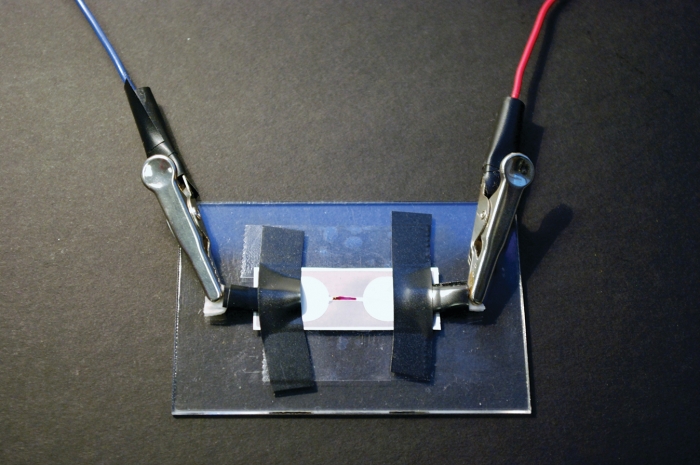 Credit: Reza Nosrati
On a paper-based DNA-analysis strip, wax sets the boundaries of a sample-loading region and a collection region (white circles). Electrical clamps apply a voltage that pushes a DNA sample (red) through the channel connecting the two regions.

Researchers have demonstrated a simple paper device that uses an electric field to concentrate and separate DNA as part of diagnostic tests (J. Am. Chem. Soc. 2015, DOI: 10.1021/jacs.5b08523). In early tests, the method worked as well as the polymerase chain reaction (PCR)—the gold standard for DNA diagnostics—did for two clinical applications, the researchers say.

First, they print paper with wax to delineate a reservoir and a long, thin channel. At the edge of the reservoir, they coat a small area of the nanoporous paper with positively charged Nafion polymer. Then they label the DNA molecules with a dye and pipette the sample onto the reservoir. Applying an electric field to the paper concentrates the negatively charged DNA in the Nafion-coated region. Then, by switching the polarity of the electric field, the DNA migrates down the channel, separating the DNA molecules on the basis of their molecular weight and charge. Researchers run a sample with a mixture of dye-labeled standards of known molecular weight in a parallel channel, allowing them to identify the particular bit of DNA they’re looking for by its known size and how it aligns with the standard.

The group showed that this method could be used to assess sperm viability by observing the proportion of fragmented DNA in semen samples, and to detect hepatitis B DNA in spiked blood serum. The method has a diagnostic accuracy similar to PCR, the typical method for DNA-based diagnosis, Sinton says, but this method is simpler, and the test strips should only cost a few cents. Now the group plans to design a portable device that can supply the appropriate voltage to drive DNA migration and view the results.