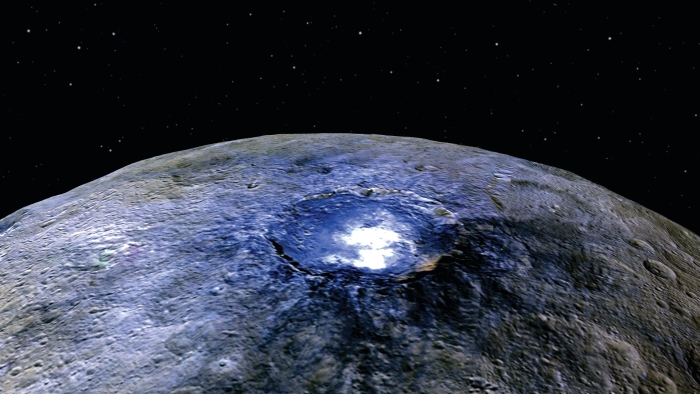 Credit: NASA/JPL-Caltech/UCLA/MPS/DLR/IDA
A bright spot in a large crater on Ceres could be ice.

New research bolsters the idea that the dwarf planet Ceres, which resides within the asteroid belt between Mars and Jupiter, shows some cometlike behavior.

In the first of two published papers, an international team led by Andreas Nathues at the Max Planck Institute for Solar System Research examined new data from the National Aeronautics & Space Administration’s Dawn spacecraft, which is orbiting Ceres. The scientists found numerous bright spots on Ceres’s largely dark surface, which could be hydrated magnesium sulfates. In the center of one large crater is a bright spot, where hazy plumes of ice or dust wax and wane on a diurnal cycle. This activity is suggestive of sublimation—a solid-to-gas transition phenomenon previously thought to be exclusive to comets (Nature 2015, DOI: 10.1038/nature15754).

With a diameter of 950 km, Ceres is the largest object in the asteroid belt. When scientists discovered Ceres in 1801, they considered it a planet but then later reclassified it as an asteroid in the 1850s. Since 2006, Ceres has largely been referred to as a dwarf planet.

BRIGHT SPOT
A video from the Dawn spacecraft pans over the surface of Ceres, showing a bright spot inside a large crater.
Credit: NASA/JPL-Caltech/UCLA/MPS/DLR/IDA

Michael F. A’Hearn, comet science pioneer and emeritus professor at the University of Maryland, has long believed that small solar system bodies exist on a continuum between inert, rocky objects and volatile, outgassing comets. The new Ceres results “are consistent with the existence of a continuum,” A’Hearn tells C&EN.

“The haze that they see at noon on the crater, but not in evening twilight, is certainly consistent with diurnal sublimation,” he says. But to definitively nail down the composition of the bright spot in the crater would require more sensitive spectrometers than Dawn carries, he adds.

Michael Küppers at the European Space Astronomy Centre, in Madrid, agrees. The spectra from Dawn seem to point to a preponderance of water-bearing minerals, not water ice, on Ceres, he says. However, given that water vapor has been detected before on Ceres, “subsurface ice may still be present and explain the vaporization,” he notes.

In a second paper on Ceres’s surface composition, another international team led by Maria Cristina de Sanctis at the National Institute for Astrophysics, in Rome, reports that Dawn has also detected ammoniated phyllosilicates on Ceres’s surface (Nature 2015, DOI: 10.1038/nature16172).

Ammonia exists as ice only at the extremely cold temperatures of the outer solar system, so the discovery suggests Ceres may have formed in that remote region. It’s also possible that particles of icy ammonia migrated to Ceres after it formed, the authors say.