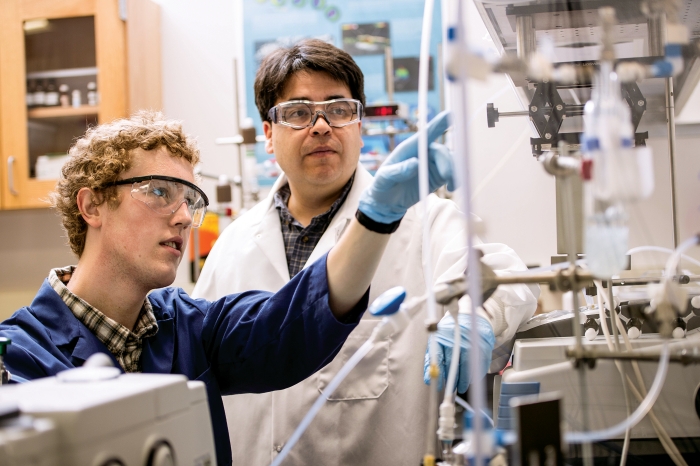 Undergraduate chemistry labs introduce students to the methods and equipment that chemists use, as well as reinforce concepts taught in the classroom. But lab classes don’t often offer students a taste of how chemists conduct actual research. Increasing numbers of professors are trying to change teaching lab curricula to give students that much-needed research experience.

“We teach technical proficiency in undergraduate labs, and there’s good reason for that,” says Matthew R. Hartings, assistant professor of chemistry at American University and a member of C&EN’s advisory board. “But when you’re teaching to proficiency, there’s no scientific question you’re asking.”

Instead, canned experiments typically have a “right” answer. “When students know there’s an answer they should be getting, all they want is to get that answer,” Hartings says. That isn’t a bad way to prepare students for doing science, but, he says, it isn’t optimal.

A better strategy is giving students a chance to do real research, Hartings and others think. Unfortunately, not all undergraduates elect to do research outside the classroom before they graduate.

Making research a part of undergraduate teaching labs catches those students and allows departments to better use their resources. Students can learn new techniques and skills and at the same time “advance the scientific enterprise,” says Kimberley A. Frederick, chair of the chemistry department at Skidmore College.

To do that, Frederick and her colleagues bring their own research into the laboratory curriculum, starting with the second semester of organic chemistry. Students work on projects related to their professors’ research. In organic chemistry, for example, students synthesize different analogs of molecules a professor is interested in studying. In biochemistry, students characterize the properties and activity of different protein mutants.

She asks faculty to submit projects in which they’re stymied by the lack of a good analytical method. The students work in pairs to develop analytical protocols for their “clients.” For example, this semester, one pair of students will develop a method to measure bisphenol A bioaccumulation in fat tissue from mice so the professor can determine the compound’s effect on circadian rhythms. Another pair of students will develop a method so an ocean ecologist can determine the amount of inorganic carbon in tiny algae called coccolithophores. In many cases, the students will get to be authors on any resulting publications.

The chemistry department at Carroll College does things a little differently. Instead of spreading research across the curriculum, it combines the lab components from all its upper division courses into a single yearlong integrated lab that the students take as seniors. In that lab, students work individually on faculty research projects in four-week modules. At the end of each module, they have “group meetings” at which students explain the progress they’ve made and hand the projects off to other students.

The next person then picks up where the previous one left off. “The next student is not supposed to start over,” says Colin Thomas, associate professor and chair of the chemistry department at Carroll. “They’re really supposed to incorporate the data and interpretation of the previous student, such that they can guide future experimentation.”

“We’re trying to emulate industry and graduate school as much as we can in terms of the evolution of scientific projects and the collaborative transfer of information about those projects,” says John G. Rowley, assistant professor of chemistry at Carroll.

The students are producing high-quality, impactful data, Rowley says. “Because of this course, my most recent grant proposal had extremely robust preliminary data,” Rowley says. He recently learned that his grant proposal on solar fuels was funded. “The success of my proposal is due in large part to the fact that students in our integrated lab are tackling real and meaningful chemical problems.”

And the students benefit from doing such research. They come to realize that “science is a process through which we create new information,” rather than a set of facts, Rowley says. “It’s really by giving them the freedom to pose questions and develop techniques to answer those questions that they truly understand and love doing science.” Frederick says her students at Skidmore think that being able to talk about their projects has been an important factor in getting jobs after graduation. 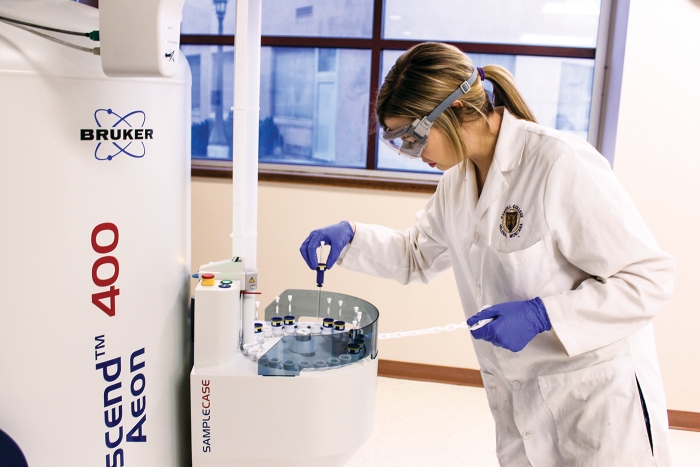 Still, at neither Skidmore nor Carroll is the research in teaching labs replacing traditional undergraduate research in which students work on their own time with a particular professor. “What it does do is provide more opportunities for students to engage in faculty-level research,” Thomas says.

Whereas some schools use faculty research projects in their curricula, the students drive the research in American’s upper-level integrated chemistry labs (J. Chem. Educ. 2015, DOI: 10.1021/ed500793q). Junior and senior chemistry majors take two two-semester laboratory sequences, one focused on inorganic and physical chemistry and the other focused on biological chemistry.

In those labs, the students work on projects of their own choosing, within a framework. Hartings wanted the projects to be separate from professors’ research and expertise. That way, “students feel like they own the process and the project.”

In the inorganic chemistry lab, students work on projects involving nanoparticles. In the first semester, they rerun experiments done by the previous group of students. Those experiments serve as control experiments and allow them to learn new techniques. For the second semester, the students propose new projects based on their own interests that build on the work they did in the first semester. One of those second-semester projects, in turn, becomes the control experiment for the next set of students.

The program has resulted in scientific publications for the students. “This has been a really productive research and scholarship stream for our department,” Hartings says. “We’re at a point where we’re writing about one paper a year from this research.” And three were submitted to journals from the 2014–15 school year. “This is a great way to teach chemistry and a great way to get some real chemistry done.”

When students talk about the class in interviews for graduate school or jobs, they get positive feedback, Hartings says. “It really helps the students and makes them stronger,” he says.

At each of these schools, figuring out how to assess the students has been a challenge. “Having them show up in the lab and do the research is fine, but they’re still doing it for course credit and a grade,” Carroll’s Thomas says. The faculty at Carroll needed to figure out how to standardize their grading in ways that wouldn’t give more experienced research students an unfair advantage. The instructors decided that they would measure the change in student performance, rather than some fixed set of achievements.

“We’re choosing assessments that we think will direct them in ways that they’ll be successful scientists in the future,” Thomas says.

At American, assessments are crafted so that students can correct errors along the way. If Hartings sees that a student has done something wrong, he asks them to redo it. If they do, they get full credit.

Another challenge is how to scale up such programs. Carroll’s lab accommodates only eight students. “My hope is that our integrated lab attracts enough students to our program that faculty workload becomes the next problem to confront,” Thomas says.

The answers to such questions could affect more than just small colleges, she says. Large research universities could take such an approach because they tend to keep their lab sections small. “This is an important model for those institutions that are so large they can’t provide real out-of-class research experiences” for all students, Frederick says.

Education
Oklahoma Revamps Chemistry Graduate Program
Education
Preceptors Knit Classes Together
Education
ACS Award For Achievement In Research For The Teaching & Learning Of Chemistry
Share X
To send an e-mail to multiple recipients, separate e-mail addresses with a comma, semicolon, or both.
Title: Bringing research into teaching labs
Author: Celia Henry Arnaud
Chemical & Engineering News will not share your email address with any other person or company.