Postdoctoral researcher Thea Ekins-Coward, 29, lost an arm and suffered other injuries in a lab explosion at the University of Hawaii (UH), Mānoa on March 16.

Queen’s Medical Center, where Ekins-Coward was initially hospitalized, declined to release any information about her condition as of C&EN press time.

Ekins-Coward was working for the Hawaii Natural Energy Institute (HNEI), which is a research unit within UH. HNEI researcher Jian Yu operates the lab in which the explosion happened. Yu’s research program includes developing microbial processes for producing biofuels and bioplastics from renewable feedstocks.

At the time of the incident, Ekins-Coward was combining hydrogen, carbon dioxide, and oxygen gases from high-pressure cylinders into a lower pressure container, said Brian Taylor, dean of the School of Ocean & Earth Science & Technology, during a March 17 news conference. The mixture was to be used to feed bacteria. “Since 2008, when the project began, the process has been used almost daily and without incident,” Taylor said.

[+]Enlarge
Credit: Allyson Blair/Hawaii News Now
The explosion that injured Ekins-Coward on March 16 cracked the glass in the door of the lab where she was working. 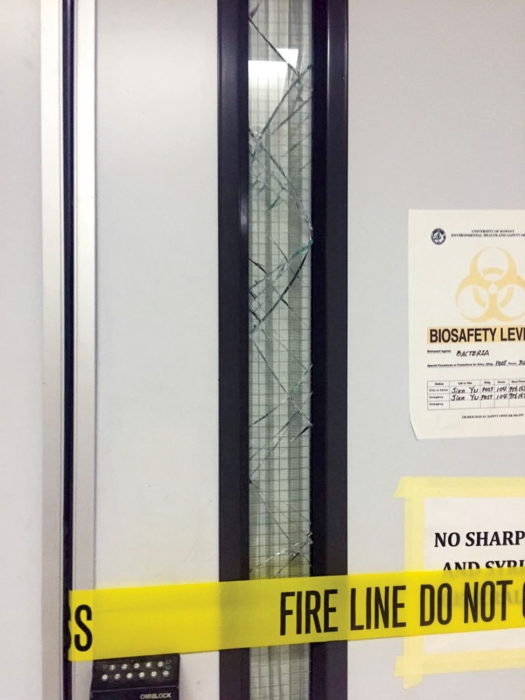 Credit: Allyson Blair/Hawaii News Now
The explosion that injured Ekins-Coward on March 16 cracked the glass in the door of the lab where she was working.

The Hawaii Occupational Safety & Health Division is investigating the incident. “UH will also be bringing outside experts for its own investigation,” university spokesman Daniel Meisenzahl told C&EN. “Leadership has made a commitment to make sure everything is done thoroughly and correctly.”

HNEI has initiated a comprehensive safety review of all its laboratory operations, Taylor said. The building was found to be structurally sound and reopened on March 18, although the damaged lab remains closed.

Lab Safety
Civil suit filed against University of Hawaii for lab explosion
Safety
Hawaii explosion cost a researcher an arm
Safety
U Hawaii fined $115,500 for lab explosion
Share X
To send an e-mail to multiple recipients, separate e-mail addresses with a comma, semicolon, or both.
Title: Researcher Thea Ekins-Coward loses arm in University of Hawaii explosion
Author: Jyllian Kemsley
Chemical & Engineering News will not share your email address with any other person or company.

Comments
Dr. ASHWANI KUMAR VERMA (March 24, 2016 11:08 PM)
Dear Mr. Jyllian Kemsley,
Sorry to know about the injury to the researcher in this accident. Could you please let me know that on what scale was he performing this reaction?

Being a chemist, his information will help me & team in future.

I wish Thea Ekins-Coward to get well soon.

A laboratory strain of hydrogen-oxidizing bacterium was isolated from local environment and used in this work. About 5 g of environmental sample was mixed with 50 mL salt solution (0.85% NaCl) and incubated in a rotary shaker (Innova 4230, New Brunswick Scientific, Edison, NJ) at 200 rpm and 30 °C for 1 h. Serial dilutions of the solution were spread on agar plates and left in anaerobic jars (2 L each). The jars were flushed with a gas (H2:O2:CO2 = 7:2:1), sealed and incubated at 30 °C. The gas was prepared from cylinders of H2, O2 and CO2 through a gas proportioner (T3215-56, Cole-Parmer, Vernon Hills, IL) and the composition was determined with a gas chromatography (Model 450, Bruker, Fremont, CA). After examination of microbial growth on agar, the jars were re-flushed with the gas. The microbial colonies were checked under UV light and those exhibiting fluorescent orange color were marked as positive isolates of Knallgas bacteria that accumulated polyhydroxybutyrate or other lipid storage compounds [18].

Nancy (March 28, 2016 10:44 AM)
Very tragic accident. The more details can be shared about the circumstances that contributed to it the better it will help us all to reduce the risk in our labs. Thank you and well wishes for Dr. Ekins-Coward and her family.
Reply »

Jyllian Kemsley (July 11, 2016 2:35 PM)
UPDATE: The University of California Center for Laboratory Safety has completed its investigation of the explosion, and concluded that the immediate cause was an electrostatic discharge between Ekins-Coward and the gas tank. Going beyond the immediate cause of the explosion, however, “the overall underlying cause of the accident was failure to recognize and control the hazards of an explosive gas mixture of hydrogen and oxygen,” the UCCLS report says.

Story and links to the report are here: http://cen.acs.org/articles/94/i28/University-Hawaii-lab-explosion-likely.html
Reply »

Jyllian Kemsley (July 11, 2016 2:36 PM)
UPDATE: The University of California Center for Laboratory Safety has completed its investigation of the explosion, and concluded that the immediate cause was not a spark from the pressure gauge but an electrostatic discharge between Ekins-Coward and the gas tank. Going beyond the immediate cause of the explosion, however, “the overall underlying cause of the accident was failure to recognize and control the hazards of an explosive gas mixture of hydrogen and oxygen,” the UCCLS report says.

Story and links to the report are here: http://cen.acs.org/articles/94/i28/University-Hawaii-lab-explosion-likely.html
Reply »

N.T. (October 12, 2016 3:30 PM)
If one examines the pictures in the news story below one can easily identify the container(gas tank) that exploded due to ignition of the explosive gas mixture.

Its a metallic container which essentially acted as a grenade. The electrostatic discharge must have happened either inside the cylinder or in the tubing and then traveled inside. It is obvious from the pictures the gas cylinder has blown outwards.

The volume of the cylinder is about 5-7 L. I don't know why the students/postdocs were allowed to work with such huge volumes of explosive gases since 2008 !!, using unsuitable containers without pressure relief valves in an unprotected environment.
This is really sad. I am sorry for the postdoc and I am furious with her supervisor and the Health and safety department of the university. I really hope the postdoc was insured; she should definitely sue the university.
Reply »