At the IHS conference in Houston, analysts warned attendees about low oil prices and an uncertain economy 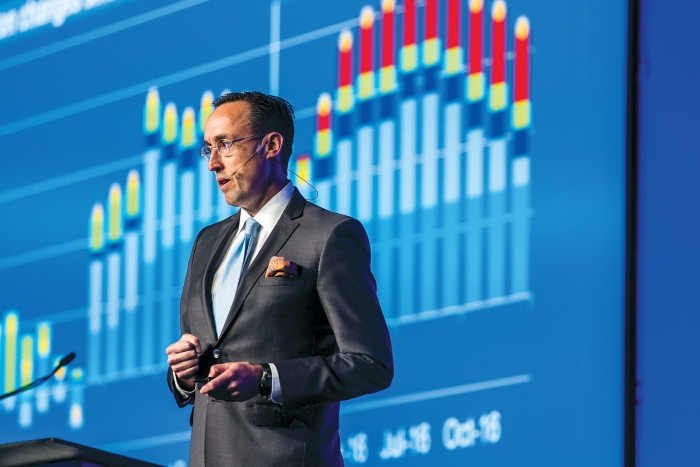 The speakers at IHS Chemical’s World Petrochemical Conference in Houston last month made it clear that this era is coming to a close. The hydraulic fracturing that brought forth a bounty of natural gas feedstock for U.S. chemical makers also helped lower raw material prices for their global competitors. Additionally, slackening economic growth in China and elsewhere could hamper the U.S. industry’s ability to sell its mounting output. Companies, it seems, will need to adjust.

“Our industry continues to be buffeted by volatile gyrations of the energy and economic trade winds that never seem to allow for smooth sailing or even a simple, steady course,” said Dave Witte, general manager of IHS Chemical, in greeting a ballroom packed with more than 1,000 paid attendees.

Just two years ago, oil prices were about $100 per barrel. Now they are about $40, after dipping below $30 earlier this year, levels the market hasn’t seen since the early 2000s.

U.S. chemical makers primarily use natural-gas-based ethane as feedstock for their ethylene crackers, not naphtha as their Asian and European rivals do. After the arrival of shale gas in the late 2000s, U.S. companies enjoyed a period of big cost advantages. But over the past two years, Witte told attendees, tumbling oil prices have whittled that advantage down by half.

Jamie Webster, vice president for crude oil markets at IHS Energy, sees some potential relief for U.S. chemical producers. He told attendees that oil supply and demand should strike a balance later this year. When that happens, oil prices will start to creep up again.

The world produces 95 million bbl of oil per day, about 1 million more than it has been consuming, Webster explained. It’s not a big overhang, but oil producers have been reluctant to cut back. “Everyone has produced as much as they can because the price is lower and they need to make money today,” he noted.

Later this year, Webster said, prices will likely dip once more below $30, a level low enough to shake some high-cost producers, largely in the U.S., out of the market. Prices will climb once that bottom is reached to average about $44 this year. Webster sees prices inching up higher in 2017.

Despite harrowing signs such as low oil prices, meager stock market performance, and deep recessions in Russia and Brazil, IHS Chief Economist Nariman Behravesh put the probability of a global recession at 25%—and one in the U.S. at a mere 20%. Strong consumer spending is bolstering the U.S. economy, offsetting poor performance in manufacturing. Behravesh also observes strength in Europe and Japan.

Behravesh does see China as a threat to the world’s economy. Its current annual growth rate of 6.9%, astronomical by Western standards, is its lowest since 1990. He notices alarming structural problems in the country, such as higher debt levels than in the U.S. before the financial crisis of the late 2000s.

He also sees way too much manufacturing capacity in China’s heavy industries. For example, the utilization rate in the Chinese steel industry is 70%. The 30% of capacity lying fallow is same size as the U.S., Japanese, and German steel industries combined.

The global chemical industry also is adding more capacity than it needs right now, thanks to new facilities in the U.S., China, and the Middle East. According to Steve Lewandowski, senior director of global olefins for IHS Chemical, ethylene makers worldwide will add about 7 million metric tons of capacity this year and next and another 9 million metric tons in 2018.

Demand over the same period should grow by only 5 million to 6 million metric tons per year. As a result, operating rates are expected to slip, and profits may ebb.

But the chemical industry will bounce back from any slump quickly, according to Mark Eramo, vice president of global business development for IHS Chemical, because it will take a breather from building. Lower profitability, plus energy and economic uncertainty, will sow doubt in the minds of chemical executives.

“Decisions are much less obvious than they were five years ago,” he said. “We will now have a pause in terms of the capital investment cycle of the industry.”

Paul Pang, managing director of China for IHS Chemical, sees such as pause happening in China. A big growth driver for the country’s petrochemical industry in recent years has been unconventional raw materials: coal and methanol instead of ethane and naphtha. Pang told the audience that Chinese chemical makers spent $16 billion on such plants in 2015.

By the end of this year, some 17 methanol-to-olefins (MTO) plants will be operating in China with a combined 6 million metric tons of capacity. “We have many other projects in the pipeline, but again, due to poor economics, many of these projects probably won’t be built,” Pang said.

Many firms, some with Chinese backers, have been developing methanol projects in the U.S. with the intention of exporting the output to the MTO sector in China. Pang didn’t address whether an MTO slump might put these projects in jeopardy. However, Mike Nash, global director of syngas chemicals for IHS Chemical, noted that one of the methanol projects planned for the Pacific Northwest is on hold, putting two others in the area in doubt.

The chemical executives who spoke at the IHS conference bemoaned the uncertain times, but they assured the audience that they are prepared for it. Dennis Seith, U.S. president of Ineos Olefins & Polymers, invoked Heisenberg’s uncertainty principle. “We might understand exactly where we are but are just not sure about where we are going and how fast,” he said.

Seith extolled his own company’s strategy of keeping costs down and managing plants well. “Good operations mitigate the impact of uncertainty,” he said. For example, through improved reliability and modest investments in existing plants, Ineos has been able to add a new plant’s worth of output to its U.S. operations.

To Neil Chapman, president of ExxonMobil Chemical, volatility is business as usual. He lauded the virtue of his company’s massive refining and petrochemical complexes, which help it maintain high profitability no matter the scenario.

Chapman also noted that ExxonMobil has been focusing increasingly on value-added products. He said the strategy is vital in the developed world, where the market for commodity materials is already saturated. For instance, a pair of polyethylene plants the company is building in Texas will make high-end metallocene-catalyzed polyethylenes for the food packaging industry.

Overall, Chapman sees 45% growth in the global petrochemical sector over the next decade, a positive long-term outlook that should accommodate many present and future investments. “In our industry, where opportunities abound, we must deal with volatility as the norm, not the exception,” he said.

Petrochemicals
Caution ahead in petrochemicals
Business
Middle East: Low oil price to accelerate push for diversity
Business
A promising petrochemical prognosis
Share X
To send an e-mail to multiple recipients, separate e-mail addresses with a comma, semicolon, or both.
Title: Volatility returns to petrochemicals
Author: Alexander H. Tullo
Chemical & Engineering News will not share your email address with any other person or company.