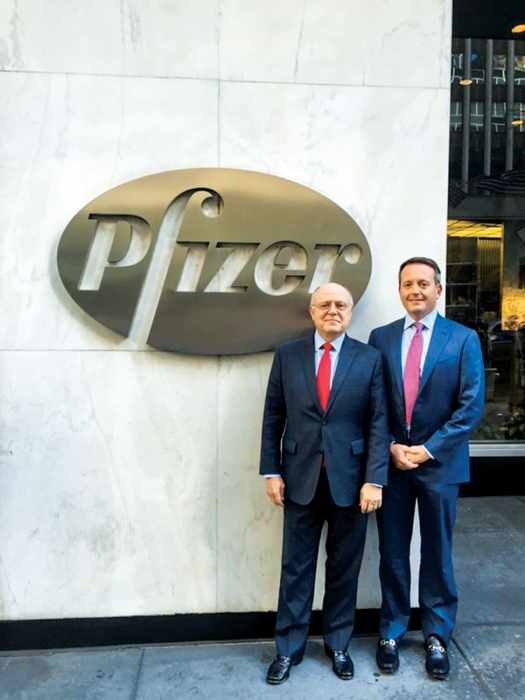 Pfizer and Allergan have dropped their plan to merge after the issuance of proposed rules by the U.S. Department of Treasury. The new rules likely would have prevented an “inversion,” in which U.S.-based Pfizer was to reduce its tax rate by buying Ireland’s Allergan and shifting its headquarters overseas.

With a $160 billion price tag, the merger would have created the world’s largest pharmaceutical company with about $64 billion in annual sales. Now, the two firms are considering their futures as stand-alone drugmakers.

“Pfizer approached this transaction from a position of strength and viewed the potential combination as an accelerator of existing strategies,” Pfizer CEO Ian Read said when calling off the deal. The company now says it will decide before the end of 2016 whether to split into two companies. Separating its innovative and established drug businesses has been in discussion for about three years and could happen by 2017.

Pfizer has a solid portfolio of marketed products and “perhaps underappreciated pipeline with many interesting drug candidates,” Evercore ISI stock analyst Mark Schoenebaum told clients in a brief note. “The ultimate event that could unlock the value of Pfizer is a potential split.”

Meanwhile, Allergan, which will get $150 million from Pfizer to cover expenses related to the aborted merger, is touting its ability to continue as a stand-alone company. “While we are disappointed that the Pfizer transaction will no longer move forward, Allergan is poised to deliver strong, sustainable growth,” CEO Brent Saunders said.

The Botox maker’s new drug pipeline has 70 mid- to late-stage programs, including 14 expected approvals and 16 regulatory submissions in 2016 alone, Saunders said. In June, Allergan is expected to close a $40.5 billion deal to sell its Actavis generics business to Israel’s Teva Pharmaceutical Industries.

“Continued standalone execution will be key for Allergan but may be somewhat more challenging in light of what has likely been a distracted employee base,” Deutsche Bank stock analyst Gregg Gilbert pointed out in a report to clients.

And whether Allergan will get the support it needs from already discontented pharma industry investors is unclear, Gilbert suggested. On news that the deal was in trouble, Allergan’s share price tumbled nearly 15% in one day.

The Treasury Department and the Obama Administration have been cracking down on inversions by trying to close loopholes that allowed them to happen. An initial set of changes proposed in September 2014 scuttled a $54 billion deal between AbbVie and the British drugmaker Shire.

Inversions are allowed when the foreign company ends up owning more than 40% of the merged firm. For the purpose of this calculation, the new rules would have greatly reduced Allergan’s apparent size by stripping out company shares issued to complete acquisitions within the past three years. Deals among Allergan, Actavis, and Forest Laboratories occurred during that period.

“Theoretically, the new rules could have been challenged in the courts on the grounds that the U.S. Treasury overstepped its authority, but that would be a long, potentially multi-year process, introducing too much uncertainty for shareholders,” Schoenebaum concluded. Comments
JRW (April 6, 2016 2:02 PM)
Company has 150 million laying around for aborted plan to avoid taxes but money for employees or instrumentation? Chemical industry like many others are driven by quarterly financial statements
Reply »

Venkatesh Naini (April 6, 2016 2:07 PM)
This is good news for American pharmaceutical professionals and researchers, who have seen merger after merger moving jobs outside of USA. Allergan was formed from revenues generated from its generics business - Actavis, which fueled serial buyouts of other companies - Andrx, Watson, Warner Chilcott, Forest and Actavis. These companies never got a chance to be properly integrated and these mergers served only one purpose - lining the pockets of executives at these firms. The casualty of this recklessness has been American innovation in drug discovery and development
Reply »