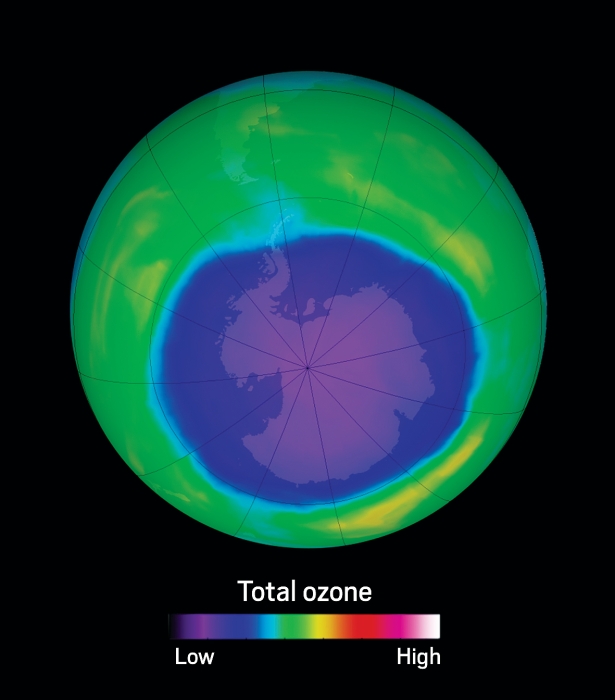 For the first time, scientists report that the protective ozone layer over Antarctica is showing signs of healing (Science 2016, DOI: 10.1126/science.aae0061).

In 1987, the international Montreal Protocol on Substances that Deplete the Ozone Layer began restricting the use of halocarbons such as refrigerants, solvents, and aerosol-can propellants, which react with and destroy ozone.

Since the Montreal Protocol was enacted, scientists have been observing a slowing of the rate of ozone depletion. The Antarctic ozone hole reached its peak size in 2000. Since then, scientists have reported that the average size of the hole was stabilizing. This new study is the first to show an actual increase in ozone levels over the Antarctic.

“Healing will be a long process, but it’s encouraging to see evidence that it has begun,” says Sue Schauffler, an atmospheric chemist at the National Center for Atmospheric Research, in Boulder, Colorado.

The ozone layer protects Earth from harmful ultraviolet radiation from the sun. F. Sherwood Rowland, Mario Molina, and Paul J. Crutzen were awarded the 1995 Nobel Prize in Chemistry for their roles in recognizing that human-generated halocarbons were causing damage to this protective layer.

Ozone loss is most dramatic over the Antarctic, where extreme cold fosters ozone-destroying chemistry in stratospheric clouds. But depletion over the milder-temperature Arctic has also occurred: In 2011, scientists reported the first actual Arctic ozone hole.

Last year, however, researchers published a model that predicted that the Antarctic ozone hole would have grown by 40% if the Montreal Protocol had not been enacted. Because of the Protocol, the scientists estimated, the hole may disappear entirely by 2050 (Nat. Commun. 2015, DOI: 10.1038/ncomms8233).

Solomon’s group studied weather balloon and satellite measurements of ozone from 2000 to 2015, as well as temperature and wind data. The researchers also took into account the atmospheric effects of events such as volcanic eruptions, which can interfere with the healing from year to year.

The group developed models predicting the hole shrinkage based on measured atmospheric levels of chlorine, one of the most important of the ozone-destroying species. Their predictions closely matched the data, and show that overall, ozone loss is declining. They also discovered that the eruption of the Chilean volcano Calbuco was responsible for an anomalously large ozone hole reported in 2015.

“We can now be confident that the things we’ve done have put the planet on a path to heal,” Solomon says.”