Why interest in ammonia refrigerants is surging

Ammonia, the first refrigerant to be used on a commercial scale, is experiencing something of a renaissance. Long relegated to large food warehouses and big industrial installations, ammonia is now showing up in supermarket refrigeration systems and convention center air conditioners.

Buoyed by these successes, a sturdy band of equipment makers is pushing ammonia as an alternative to costly fluorochemical-based refrigerants. An equally sturdy band of fluorochemical makers, led by Honeywell International, is arguing against the use of ammonia beyond large industrial applications, pointing to the chemical’s toxicity. 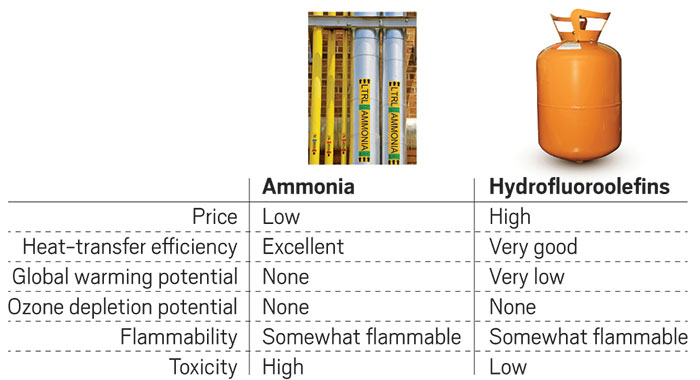 Price, toxicity stand out in competition between ammonia and HFOsSources: OSHA, IIAR, Honeywell

Some backers tout ammonia as a “natural” refrigerant because it occurs in nature. But just about all ammonia used commercially today is made synthetically by combining hydrogen and nitrogen with a catalyst under intense heat and pressure.

From an environmental angle, ammonia has formidable attributes. It doesn’t deplete Earth’s ozone layer or contribute to global warming as some fluorochemicals do. From a purely economic point of view, ammonia is an energy-saving coolant that is widely available and cheap.

But anyone who has ever had a whiff of an ammonia-based cleaner knows why it long ago disappeared from household refrigeration systems. It irritates the eyes and mucous membranes and is dangerous to life and health at 300 ppm, according to the Environmental Protection Agency. The agency also says that it is flammable at concentrations of 15–28% by volume in air.

For these reasons, one long time observer of the refrigerants market finds it hard to believe ammonia could make inroads into fluorochemicals’ domain. “Ammonia has reached all the penetration it’s going to get,” maintains Ray Will, a fluorochemicals expert with consulting firm IHS Chemical. Toxicity concerns, which fluorochemicals do not have, “outweigh everything else,” he says.

As Will sees it, using ammonia in large warehouses and at industrial sites away from population centers isn’t a big problem. Should a leak occur, it could disperse without harm, he says. Any other use he sees as a potential hazard.

“You wouldn’t want to use ammonia in a small, indoor, self-contained refrigeration or climate cooling system,” admits Caleb Nelson, business development vice president for Azane, a maker of ammonia refrigeration equipment. “You don’t want people to smell it,” should even the tiniest leak occur.

But Azane, which makes ammonia chillers used in food processing and industrial water cooling applications, sees opportunities to replace equipment operating with hydrochlorofluorocarbon (HCFC)-22, Nelson says. EPA is now enforcing a phaseout of the refrigerant under the Montreal Protocol on Substances that Deplete the Ozone Layer.

Honeywell wants to replace HCFC-22 with hydrofluoroolefins (HFOs), which are more environmentally friendly fluorochemicals, and blends that contain them.

But users of fluorocarbon refrigerants have seen variants come and go because of concerns over their global warming and ozone depletion potential, Nelson points out. Ammonia “meets the needs of environmentally conscious end users,” he says, and is likely to be around for many years.

Because safety is a concern when it comes to ammonia, refrigeration equipment containing the pungent fluid typically goes outdoors, where tiny leaks aren’t noticeable, Nelson says. In addition, modern ammonia systems never bring ammonia indoors but use it to cool down a heat-transfer fluid, such as carbon dioxide or water mixed with a glycol antifreeze, which does the work inside.

It is those so-called “cascade” systems that are now showing up in a few U.S. supermarkets: two in California, one in Texas, and, the most recent, a Piggly Wiggly that opened last September in Columbus, Ga.

In addition to supermarkets, large hotel and convention spaces, such as McCormick Place in Chicago, have seen ammonia-based equipment make inroads, notes Doug Reindl, director of the Industrial Refrigeration Consortium at the University of Wisconsin, Madison. Such applications more typically go to fluorocarbon-based refrigerants, he points out.

The latest crop of fluorochemical refrigerants, the HFOs, does look good, Reindl allows. They are less toxic than ammonia and seem to pose less risk to the environment than their CFC and HCFC predecessors, he says. But as HFOs are studied and used, issues may come to light that weren’t anticipated, he points out.

That’s certainly happened before. Early fluorochemical refrigerants, such as CFC-12, replaced methyl chloride, sulfur dioxide, and various hydrocarbons because leaks could lead to fires and death. Thought to be safe because it is non toxic and nonflammable, CFC-12 was among the first refrigerants banned under the Montreal Protocol for its ozone depletion potential. A string of fluorochemical variants and mixtures has come and gone since as shortcomings emerged.

By contrast, ammonia has been used consistently as a commercial refrigerant for more than 150 years. The latest low-charge systems hold a fraction of the ammonia such systems traditionally required, making them more attractive to some supermarket and convention center uses.

The International Institute of Ammonia Refrigeration (IIAR) can only provide an educated guess as to the number of ammonia refrigeration systems in the U.S. It counts about 12,000 such systems among the millions of installed refrigeration units country wide.

System failures are a rarity. But when they happen, the fallout can be spectacular. A 2010 release of 14,500 kg of ammonia from the Millard Refrigerated Services warehouse in Theodore, Ala., exposed 800 people to the fumes and sent 152 of them to the hospital.

On the other hand, fluorochemical refrigerants have no smell at all. “They are asphyxiants,” Smith says, and when they are released in enclosed spaces without ventilation, anyone nearby could suffocate. “We believe the number of deaths caused by synthetic refrigerants is equal to the number caused by ammonia. For both, deaths are rare,” he says.

“You really can’t get away from ammonia’s toxicity issue,” counters Ron Vogl, global technical service leader for Honeywell. Yes, he admits, fluorochemicals can cause asphyxiation by displacing oxygen in a room. On the other hand, 10 minutes of exposure to ammonia at 2,700 ppm is lethal, according to the National Institutes of Health.

And although new HFO refrigerants developed to replace their problematic predecessors are somewhat flammable, blends of those new HFOs with other fluorochemicals are nonflammable. “These blends have reduced global warming potential and are still allowed under existing government regulations,” says Tom Morris, a Honeywell business director.

Given the infrastructure that’s in place and the familiarity service technicians already have with fluorochemicals, Morris sees the budding enthusiasm for ammonia as something of a fad. In another 25 years, he expects, ammonia will have a limited role in commercial refrigeration where it now has its niche.