Protein stays stable without its charges 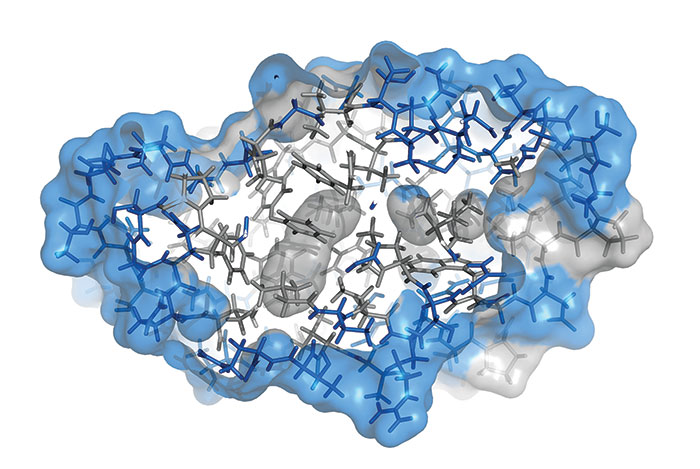 Credit: Jakob Winther
Removing the charges from a cellulose-binding protein left its structure and function unaffected. Hydrophilic residues are in blue; hydrophobic ones are in gray.

Charge is a fundamental factor that helps dictate a protein’s structure and activity. Five out of the 20 amino acids commonly found in proteins are either positively or negatively charged under physiological conditions, and all known soluble proteins have at least a few of these residues.

Now, in a surprising twist, researchers have mutated a protein to remove its charged amino acids and found that the protein retains its structure, solubility, and activity. The findings may one day help scientists build better algorithms for designing proteins with new functions (Biochemistry 2016, DOI: 10.1021/acs.biochem.6b00269).

To make the uncharged protein, Jakob R. Winther of the University of Copenhagen and colleagues first searched a data bank of protein structures to find the least-charged protein or protein domain containing 100 or more residues. That turned out to be a cellulose-binding domain from the bacterium Cellulomonas fimi. Next, the researchers looked for ways to swap the domain’s four charged residues with neutral amino acids, while producing the most stable protein possible. The winning mutant replaced a lysine, aspartic acid, arginine, and histidine with a methionine, glutamine, methionine, and tryptophan, respectively.

After expressing their mutant protein in Escherichia coli, the researchers tested its solubility and stability and assessed the protein’s structure with circular dichroism and nuclear magnetic resonance spectroscopy.

On the basis of all these measures, the uncharged protein seemed largely the same as the charged version. Plus, it was actually more stable than the original. Finally, the researchers tested to see whether the protein still bound cellulose. “To our surprise, we got something that is fully functional” from pH 2 to 12, Winther says.

Emil Alexov of Clemson University says the study provides important insight on the effect of charge on solubility. In an uncharged protein, “solubility should decrease, but this was not the case,” he says.