The American Chemical Society announced earlier this month that it will create a chemistry preprint server to promote sharing of early scientific results.

Trending
[+]Enlarge
Preprint servers such as the ones listed here are gaining popularity. 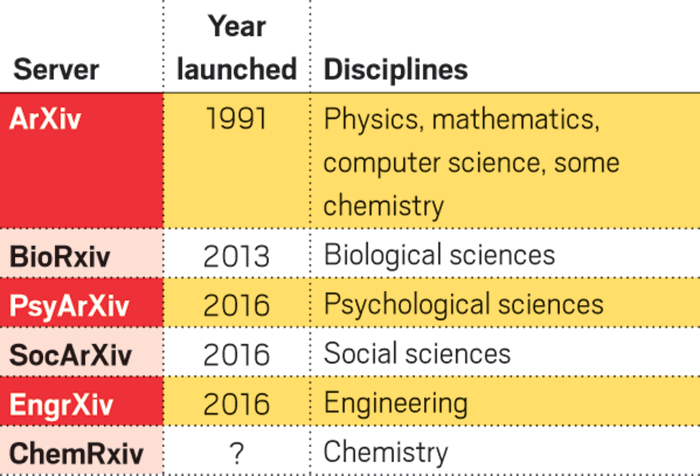 Preprint servers such as the ones listed here are gaining popularity.

Preprint servers allow researchers to circulate draft papers or preliminary data online to get feedback from the larger community before a paper goes through a journal’s more formal peer review process.

“A preprint server dedicated to chemists will help speed the dissemination of research results, solicit valuable feedback, and foster international collaboration,” says Kevin Davies, a vice president in ACS’s Publications Division who is spearheading the effort.

The details of how the preprint server, tentatively called ChemRxiv, might work have not yet been decided. It will be a joint undertaking between two of ACS’s divisions, CAS and Publications, but ACS is seeking outside collaborators to join in its development.

Given recent announcements of new preprint servers for the social sciences and engineering, chemistry was beginning to look like a bit of a loner.
Stephen Curry, professor of structural biology, Imperial College London

Preprint servers have been popular in physics and computer science for more than 20 years. ArXiv, a large physics preprint server, has an active community—including some chemists—that contributes research and comments on publications. A recent push also created BioRxiv for the biological sciences.

“Given recent announcements of new preprint servers for the social sciences and engineering, chemistry was beginning to look like a bit of a loner,” says Stephen Curry, a structural biologist at Imperial College London who advocates publication of all results—not just the positive ones.

Curry says that ChemRxiv’s success will depend, in large part, on how easy the preprint server is to use. A push for culture change is needed to “get people into the preprint habit,” he says.

Nature Chemistry Chief Editor Stuart Cantrill says he isn’t sure chemists want to put their work online early. Even if they do, “I’m not convinced an ACS-branded server will appeal to all,” Cantrill says. “A cross-publisher initiative that includes the likes of the Royal Society of Chemistry and other chem-heavy publishers would probably be a better bet.”

Past attempts at creating a chemistry preprint server failed, including one launched as part of an Elsevier website called ChemWeb.com. Bill Town, who was managing director of that endeavor, says: “The main reason for its ultimate demise was the attitude of journal editors who regarded web publishing of preprints as prior publication.”

These editors, from ACS and elsewhere, would not accept the work in their journals later, Town says. Now Nature,Science, and many other top journals regularly accept research that has been published on a preprint server.

Currently, ACS journal editors decide on their own whether to accept papers that have already been posted online, says Davies, who is also C&EN’s publisher. About 20 of the approximately 50 ACS journals accept preprints unconditionally and another dozen allow it but ask for the author to discuss any preprint with an editor.

Carolyn Bertozzi, editor-in-chief of the open access journal ACS Central Science, has made the decision to allow authors to pursue preprint publication, and she hopes other ACS journal editors join her.

“Both an author and a journal can benefit from broad dissemination and feedback in advance of publication,” Bertozzi says. “It’s our hope that chemists will see the shifting winds and that our community no longer considers a preprint server a threat.”