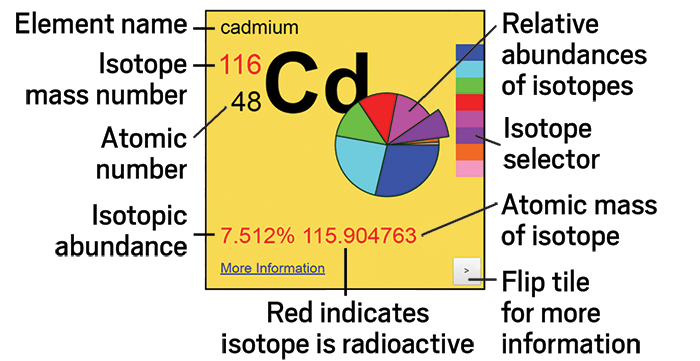 What comes to mind when you think about isotopes? Radioactivity, perhaps? That’s only the tip of the iceberg.

A new interactive periodic table of the elements and isotopes, launched last month by the King’s Centre for Visualization in Science (KCVS) in Edmonton, Alberta, and the International Union of Pure & Applied Chemistry, aims to show the breadth of isotopes and their applications.

The development team hopes that the format will help students understand why atomic weights of some elements are not constants of nature, but are instead weighted averages that reflect the natural abundances of isotopes. The team also included information about isotope applications. For example, by clicking on the box for nitrogen, students will learn that 15N added to fertilizer can be used to track nitrogen uptake in plants and migration in soils.

High school teacher Sally Mitchell, who is currently an Albert Einstein Distinguished Educator Fellow at the Department of Energy’s Office of Science, says that when she taught students about isotopes, she seldom covered their applications. “This periodic table highlights some really great applications of isotopes in a visual way,” she says. “No more boring mathematical equations as the introduction to isotopes.”

Dan Leskiw, a high school chemistry teacher at Jasper Place High School, in Edmonton, says he used to have to assemble information on isotopes from different sites. “The new interactive periodic table provides a hub for students to begin their analysis and interpretation of the data.”

To check out the interactive periodic table of the elements and isotopes, visit isotopesmatter.com. 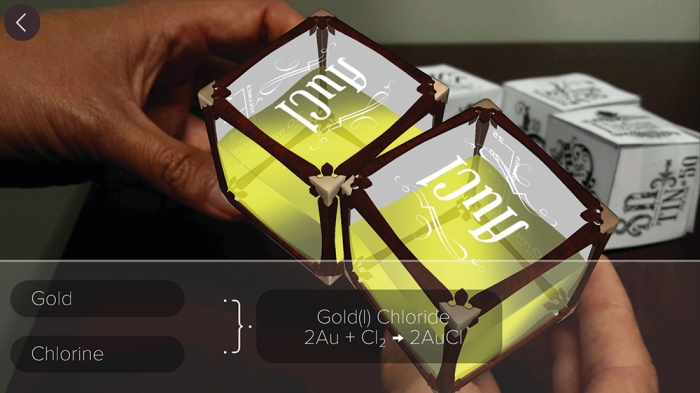 Forget Pokémon Go. There’s a new augmented reality game in town for chemistry students. Elements 4D, an app created by start-up company Daqri, gives students the ability to interact virtually with the periodic table of the elements. To start, print, cut, and fold together paper blocks with element symbols. Then just hold a phone or a tablet in front of the blocks and watch them transform into digital blocks on the screen. Push two element blocks together, and watch the virtual chemical reaction take place. For example, bringing the blocks for gold and chlorine together forms gold chloride, turning both blocks a gold color. The app is available for iPhone or Android download, and the blocks and lesson plans are available for download at elements4d.daqri.com.

Agriculture
Periodic Graphics: The elements of fertilizers
Energy Storage
Adventures with the periodic table
Share X
To send an e-mail to multiple recipients, separate e-mail addresses with a comma, semicolon, or both.
Title: Interactive tools for teaching chemistry
Author: Linda Wang
Chemical & Engineering News will not share your email address with any other person or company.