Agents hit malaria parasite at all three stages of infection

Researchers have discovered a family of antimalarial agents that use a new mode of action to battle the malaria parasite.

Malaria, transmitted by mosquitos, is endemic in developing countries, especially in Africa. The World Health Organization estimates there were 214 million malaria cases and 438,000 deaths from the disease last year. Plasmodium falciparum is the parasite responsible for most deaths worldwide. A number of treatments are available, but the microorganism has developed resistance to many of them.

When the parasite infects animals, it attacks in three stages: It goes into liver cells first, then enters blood cells, and finally forms gametes that can be transmitted to mosquitos. Most treatments primarily target parasites in the blood stage, which causes malaria’s symptoms—fever, vomiting, and coma.

Stuart L. Schreiber of the Broad Institute and Harvard University and coworkers have now discovered agents that kill the parasite in all three stages in infected mice, curing the mice for up to 30 days with a single oral dose (Nature 2016, DOI: 10.1038/nature19804). The team identified the compounds by screening 100,000 molecules in the Broad’s diversity-oriented synthesis (DOS) library. DOS, a strategy Schreiber’s group introduced in 1990, is a way to synthesize compounds that mimic the structural complexity and diversity of natural products.

“The study is a tour-de-force combination of innovative synthetic chemistry and elegant functional screening applied to a major human health problem,” comments Benjamin Cravatt, an expert in enzymes and human disease at Scripps Research Institute California. 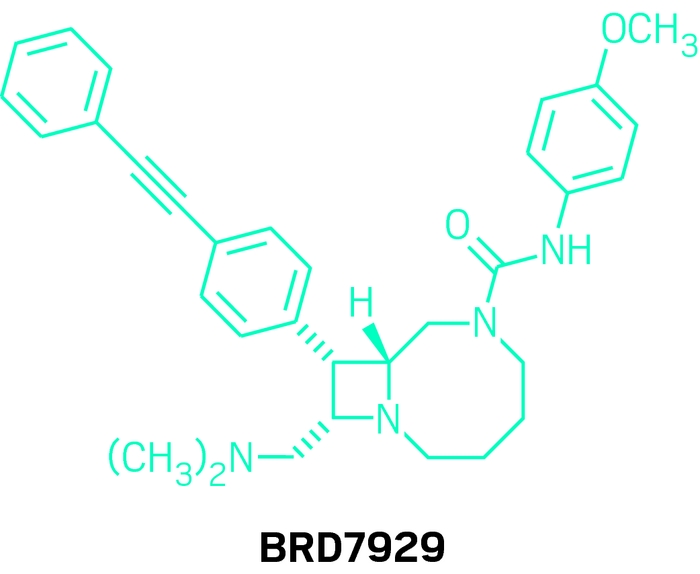 After initial screening of the 100,000 compounds for antimalarials, additional screening focused on compounds effective against all three parasite stages and likely to hit previously unknown targets. The result was a series of bicyclic azetidines, including a promising compound called BRD7929. The agents’ new mechanism of antimalarial action is inhibition of the enzyme phenylalanyl tRNA synthetase, which helps the microorganism synthesize proteins.

By hitting all three parasite stages, a drug not only could eliminate malaria symptoms but also stop disease transmission and perhaps deter resistance.

Eisai Inc. is developing the antimalarials with support from the Global Health Innovative Technology Fund. Schreiber’s group also made all structures and screening data available online at a new Malaria Therapeutics Response Portal. “We invite the scientific community to use this database as a jumping-off point” for antimalarials development, Schreiber says.

Jeremy Burrows and James Duffy of the drug discovery unit at the Medicines for Malaria Venture, an organization that coordinates international efforts to develop antimalarials, comment that if a candidate from the series is ultimately shown to have long-duration efficacy in patients, then “it could be a significant contribution to MMV’s goal to deliver single-dose treatments and chemoprotectants.” Single-dose oral treatments are especially important in the resource-limited areas where malaria is prevalent because they can be cheap and easy to administer. However, Burrows and Duffy note, extensive optimization and further development will be necessary for this discovery to have impact in the field.

Larry J Westrum (September 8, 2016 3:54 PM)
I was struck by the hydrophobic diphenylacetylene group. Was that selected by clues from computational modeling or did it fall out as a result of screening? Regardless, it is a fine piece of work. Well done.
Reply »

Dr. Nihal S. DeSilva (September 13, 2016 6:10 PM)
we hope we don't have to use the word 'resistance' even though all 3 stages are hit!
also the ultimate proof of effectiveness is in the field especially S.E Asia where all the known drugs are now not effective ag. the microbe! So this will be a very important discovery and save lives in those parts of the world! Time will only tell!
Reply »