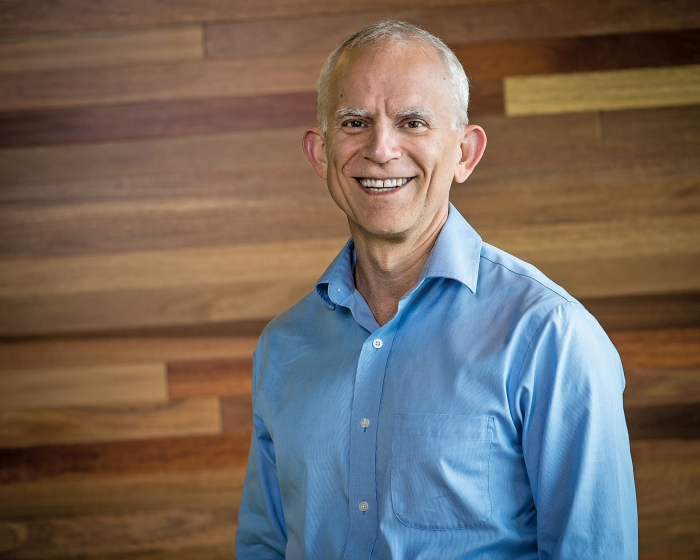 If Peter Trefonas had pursued an early fascination with computer programming, he might never have played a role in the 67 patents listing him as an inventor—mostly for photolithography chemistry used to fabricate circuitry in computer chips.

As an undergraduate at the University of New Orleans in the late 1970s, “I made some pretty good money” writing and selling computer games, Trefonas says. One, for the early TRS-80 personal computer, was the game “Worm,” in which a player controls a line as it grows in length and becomes an obstacle.

“I was fascinated with coding, logic, manipulating numbers, and graphics,” Trefonas says. But he also liked chemistry. To complete his undergraduate degree he decided he would have to focus on what mattered most to him: chemistry, and what it could do for humanity.

His enthusiasm for chemistry blossomed into a lifelong romance with photochemistry and microelectronics. Because of it, on Sept. 13 Trefonas, a corporate fellow in electronic materials at Dow Chemical, will receive the Perkin Medal for outstanding work in applied chemistry from the America Group of the Society of Chemical Industry, an organization dedicated to the advancement of the chemical enterprise.

Unusual exploit: As an undergraduate in 1978, he wrote the game“Worm” for the TRS-80 personal computer.

As a child, Trefonas fell in love with science, and chemistry in particular. Like many children in the late 1960s and early 1970s, he was fascinated by the television show Star Trek, which detailed the adventures of a future scientific mission to explore distant planets.

“For my generation, Star Trek was inspirational, and it had a big impact on me,” Trefonas says. “It helped me think about the good we can do for humanity using technology and science.”

The science books of the biochemist and prolific author Isaac Asimov “enraptured” Trefonas and inspired him to build his own laboratory at home, which he stocked with drugstore-purchased chemicals. His father Louis, then a professor of chemistry at the University of New Orleans, encouraged him in his experiments. “I was in and out of his lab all the time,” Trefonas says.

But what launched his interest in electronic materials was a project he got involved in as a Ph.D. student at the University of Wisconsin, Madison, in the lab of Robert West. Conducted with the computer maker IBM, it focused on organosiliconbilayer photoresists to pattern fine circuit lines on a computer chip.

Chemistry has played a key role in shrinking the size of features on electronic chips.

“We were successful getting high-resolution patterning,” Trefonas recalls. The project never turned into a commercial product because of improvements at the time in existing photoresists and photolithography tools, he says, but it did teach him a lot about photolithography.

A week after receiving his Ph.D. at the end of 1984, Trefonas left for St. Louis to work in the central labs of chemical maker Monsanto for its MEMC silicon wafer business.

In 1986, he and members of his lab acquired MEMC’s photolithography technology and formed Aspect Systems to further their research. Their start-up lasted a year before the photoresist maker Shipley bought it and moved members of the team, including Trefonas, to Shipley’s Massachusetts headquarters. Rohm and Haas bought Shipley in 1992. Dow acquired Rohm and Haas in 2009.

“Aspect was a research powerhouse,” Trefonas says. The firm raised funding from venture capitalists and received a grant from Sematech, a nonprofit consortium to advance chip manufacturing, for research into deep ultraviolet resists. In addition, the small firm developed ethyl lactate as a safer alternative to solvents then in use to formulate photoresists.

At Shipley, Trefonas and his colleagues continued work on photoresists that made it possible to pack an increasing number of transistors on chips. The result, built up over the years, is ever-faster microprocessors for the computers, phones, tablets, and other electronic devices that are now a feature of everyday life.

“Chemistry has played a key role in shrinking the size of features on electronic chips,” Trefonas notes. To keep up with the rapid pace of chip development over his three decades in industry, “we had to reinvent the chemistry every few years,” he says.

Trefonas found the competitive nature of the photolithography business invigorating. “I love the dynamic nature of this business,” he says.

He and the teams he has worked with at Dow and its predecessors also developed antireflective coatings that eliminate reflection that can interfere with the patterning process. For that work, he and 12 colleagues won the American Chemical Society’s 2014 Heroes of Chemistry award.

High on Trefonas’s agenda now is working with customers at their chip fabrication plants, or fabs, to further extend Moore’s law, which predicts that the number of transistors on a computer chip doubles every 24 months. Many say Moore’s law is finally reaching its limit.

Twenty-five years ago, Trefonas says, the path forward was clear; that’s not true today. Still, he sees several ways to add years to Moore’s law “before we hit the limits of physics.”

“Lithography based on 193-nm lasers has become the workhorse of advanced chip making, and we are working to extend it further,” he says. Multipatterning, for instance, in which chip makers expose photoresists multiple times, is one way to enhance feature density.

The use of self-assembling styrenic block copolymers could compete with multipatterning techniques as an alternative means of drawing dense circuit lines, Trefonas says. However, “it’s not yet clear if the copolymers will have a commercial impact,” he says.

“We are also working on the chemistry to make 13.5-nm extreme-ultraviolet lithography possible.” Exposing photoresists with the shorter wavelength light would further shrink chip features, Trefonas says. He and his colleagues are working to move the technology out of the lab and scale it up for manufacturing.

Other ways to game Moore’s law are also appearing, Trefonas notes. Some chip makers have given up on cramming more transistors on a two-dimensional plane and are instead designing multilayer three-dimensional chips. This is yet another way to pack more raw computing power into a given space, Trefonas points out.

But when Moore’s law does reach its limit in the classic computer chip, chemistry’s contribution to the advancement of electronics won’t end, Trefonas says. Students of chemistry still have many opportunities to push photolithography forward. Silicon-based chips to diagnose disease, genomic chips to measure gene expression, and printed electronics are all wide open for further exploration, he says.

Trefonas might just be a little envious of the opportunities students have today. “None of the universities had fabs to make their own computer chips or photolithography labs when I was going to school,” he says.

CORRECTION: This story was modified on Sept. 13, 2016, to correct the year that Dow Chemical acquired Rohm and Haas.

Share X
To send an e-mail to multiple recipients, separate e-mail addresses with a comma, semicolon, or both.
Title: C&EN talks with Peter Trefonas, photolithography innovator
Author: Marc S. Reisch
Chemical & Engineering News will not share your email address with any other person or company.