[+]Enlarge
Credit: PubMed
Technetium-99m, a derivative of 99Mo, is used to make medical images such as these bone scans. 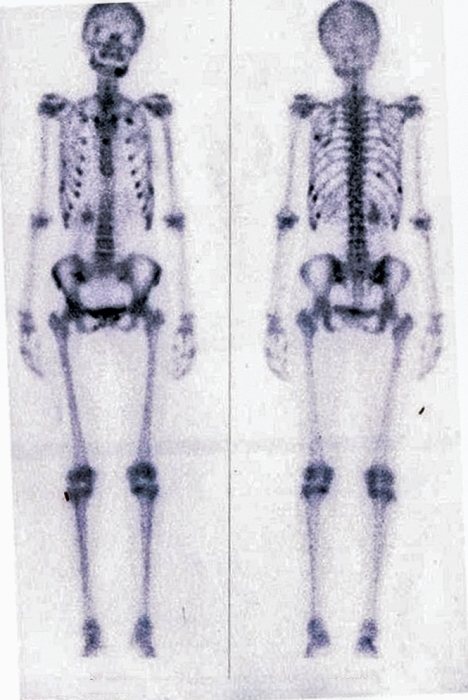 Credit: PubMed
Technetium-99m, a derivative of 99Mo, is used to make medical images such as these bone scans.

Pending changes in the supply chain for molybdenum-99 and other medical isotopes could cause severe shortages in the U.S., according to a report from a National Academy of Sciences committee. The U.S. consumes half of the 99Mo produced worldwide. The isotope, along with its derivatives including technetium-99m, is used for medical imaging. Currently, 99Mo is primarily produced using weapons-grade, highly enriched uranium. However, fears of terrorism have led to a worldwide push to shift production to facilities that use low-enriched uranium. Moreover, the Canadian reactor that is the U.S.’s main source of 99Mo is scheduled to shut down in October, and U.S. alternatives are years away from coming on-line. “Although there are plans from both existing international suppliers and potential domestic suppliers to fill the expected supply gap from Canada, the committee is concerned that any delays in bringing additional supplies of 99Mo to the market would increase the risks of substantial shortages,” says S. James Adelstein of Harvard Medical School, chair of the panel. The committee recommends working with the Canadian government to develop a plan to restart the 99Mo supply if needed.