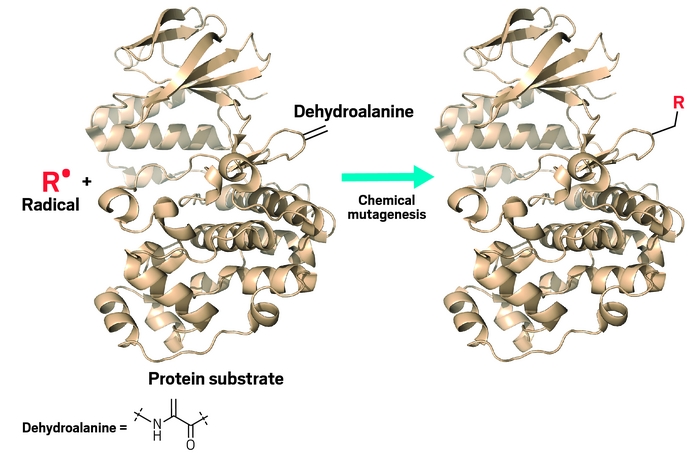 Credit: Adapted from Science
Dehydroalanine is first inserted at a selected protein site. A radical reagent then attacks dehydroalanine’s double bond to customize the protein at that site.

Researchers have devised a simple method called chemical mutagenesis that modifies proteins at specific sites. It is the first general technique for creating new C–C bond linkages in proteins and allows chemists to add a wide range of modifying groups: new sidechains, including unnatural ones; so-called posttranslational modifications that cells normally add enzymatically, including methyl groups and phosphates; and individual or chains of sugars (Science 2016, DOI: 10.1126/science.aag1465).

The approach, developed by Benjamin G. Davis and coworkers at the University of Oxford, could make it easier to study the structure and biological functions of proteins—especially when combined with other protein-modifying techniques such as site-directed mutagenesis, unnatural amino acid mutagenesis, and bioorthogonal chemistry. It could also lead to new types of protein drugs or “synthetic biologics.”

Modifying proteins by creating new C–C bonds has been largely out of reach for chemists and nature. Most posttranslational modifications that cells make on proteins—such as methylation of histone proteins, which regulates transcription; phosphorylation, which activates enzymes; and glycosylation, which affects protein recognition and signaling—create new bonds to sulfur, oxygen, and nitrogen atoms in protein sidechains. In the lab, chemists can use bioorthogonal chemistry to tweak proteins. But the technique also makes only carbon-heteroatom connections.

To derivatize proteins through new C–C bonds, Davis and coworkers first use genetic engineering, enzymes, or chemical means to insert the unnatural amino acid dehydroalanine into the protein at the site they wish to modify. Dehydroalanine’s C=C bond reacts readily with radicals, allowing the chemists to then add in a desired new group via radical chemistry. This radical chemistry is bioorthogonal—it tolerates aqueous conditions and is unreactive with most other natural functional groups found in biomolecules.

“The Davis group’s use of dehydroalanine as a radical acceptor enables C–C bond-forming reactions with an enormous range of radical precursor substrates,” comments chemical biologist Richard J. Payne of the University of Sydney. “It’s a potential game-changer for the field” of protein chemistry. “The ability to rapidly modify proteins will accelerate efforts to understand the role of modifications on structure and function. Applications of the methodology are almost endless, and the authors have done a fantastic job of showcasing this with a huge number of examples.”

Davis and coworkers demonstrate the technique by using it to attach more than 25 natural and unnatural sidechains as well as posttranslational modifications—including N- and O-linked glycans, fluorinated groups, and isotopic labels—to specific sites in eight different proteins. Some of the modifications, such as the glycan additions, are currently difficult or impossible to make any other way.

The method is not without disadvantages. For example, the C–C bonds it creates are slightly unnatural linkages for some modifications, such as glycosylation. The radical chemistry creates roughly racemic configurations at modified sites, so the process is not stereoselective. And the technique cannot yet make two modifications to the same protein molecule.

Nevertheless, “it’s very versatile,” says biosynthetic and protein chemist Wilfred A. van der Donk of the University of Illinois, Urbana-Champaign. “You can clearly see from all the examples in the paper that it can do a lot of things. When combined with other methods, it could be particularly valuable for understanding the effects of modifying individual proteins with multiple groups at multiple sites.”