Taking catalysis to the atomic limit 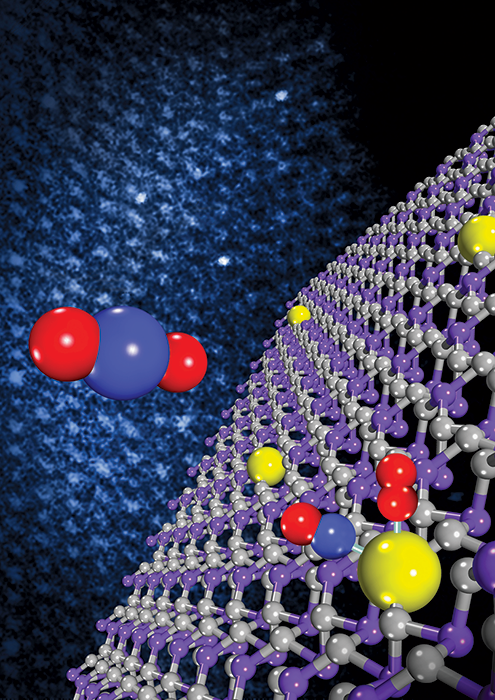 Five years ago, the idea that a single atom on a solid surface could catalyze a reaction seemed outlandish to many scientists. They reasoned that if isolated atoms could be supported on a solid—a big if—such an arrangement wouldn’t be catalytically active or chemically stable. But a few groups of chemists became encouraged by a couple of studies suggesting that not only were single-atom catalysts possible, they held numerous advantages over conventional ones.

“There was a lot of debate then about whether a single atom could serve as the active site in a heterogeneous catalyst,” says Tao Zhang, one of the field’s earliest proponents. Zhang, who is a research group leader and director of China’s Dalian Institute of Chemical Physics (DICP) notes, “This field has progressed very quickly in the past five years” and by now, more than 10 reactions have been shown to be catalyzed by single atoms. “There’s no argument now.” 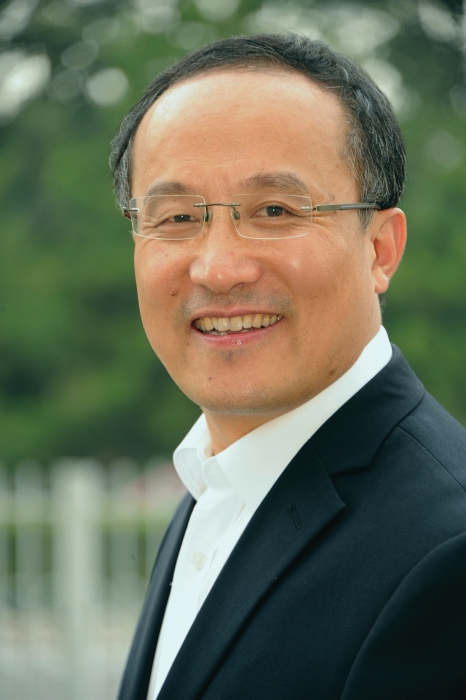 The quick progress has generated a buzz in the catalysis community and is attracting growing numbers of researchers. Many of them gathered at DICP this summer to share their findings at an international conference, the first ever devoted to single-atom catalysis.

Many industrial-scale chemical processes are driven by solid catalysts consisting of minuscule chunks of a catalytic material—often a noble metal such as platinum or rhodium—dispersed on a solid support, for example, a metal oxide. These catalysts are described as heterogeneous because the catalytic material is solid and the reactants are gases and liquids. Such catalysts drive petroleum refining, polymerization chemistry, emissions cleanup, and other commercial processes.

In general, smaller is better when it comes to supported metal catalysts. The catalytic hot spots that convert reactants to products reside on particle surfaces. Metal atoms in the interior of a catalyst don’t participate in the reaction because reactant molecules cannot reach them. So catalyst manufacturers disperse the metal very finely—as nanometer-sized particles—onto supports. The aim in making the particles so small is to maximize the number of exposed reactive sites, which boosts catalytic activity and reduces costs by using less precious metal to achieve the desired level of activity. 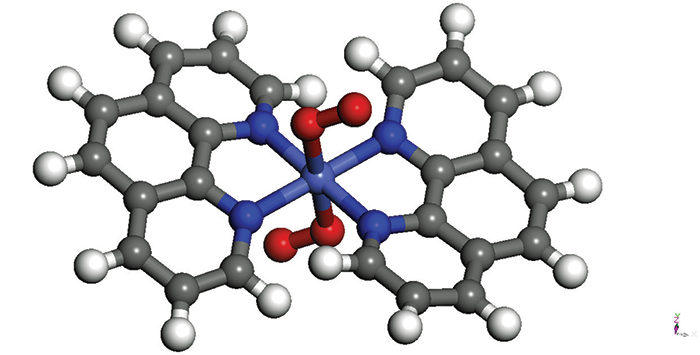 In practice, these metal particles come in a range of sizes and shapes, an indication that the metal is not being used as efficiently as possible. In addition, the lack of uniformity often leads to undesired side reactions, Zhang points out, and it makes it difficult to uniquely identify and control the catalytically active sites.

In general, smaller is better when it comes to supported metal catalysts.

In contrast, single-atom catalysts define the ultimate in metal usage efficiency—each isolated atom is an active site. Such a simplified system provides researchers with a promising way to obtain a clear picture of reaction mechanisms experimentally and computationally, which can go a long way in helping scientists make better catalysts.

But making catalysts with isolated metal atoms is tricky because the atoms usually have little energy incentive to stay put, eventually glomming together with other isolated atoms. It’s also challenging to confirm experimentally that the atoms are indeed isolated and that the system catalyzes chemical reactions.

In one study that helped jump-start the field, a team at Tufts University, led by E. Charles H. (Charlie) Sykes and Maria Flytzani-Stephanopoulos surmounted those challenges by heating palladium in vacuum and trapping evaporated metal atoms individually on a nearby copper surface. Owing to differences in the two metals’ properties and their shared tendency to form alloys, isolated Pd atoms remained stable on the copper at low concentrations. The team confirmed that arrangement via scanning tunneling microscopy (Science 2012, DOI:10.1126/science.1215864).

Then the group showed that the Pd-Cu system functions as an effective catalyst for hydrogenating organic compounds. Specifically, they found that H2 molecules bind and dissociate at single-Pd-atom sites, releasing H atoms that “spill over” onto regions of bare copper. Copper binds H atoms weakly, leaving them mobile enough to wander about the surface and react with organic molecules.

The team demonstrated that the catalyst selectively hydrogenated acetylene and styrene to ethylene and ethyl­benzene, respectively. But when the group increased the Pd concentration, causing the atoms to coalesce and form tiny Pd islands, the Pd-Cu system lost its selectivity, underscoring the single-atom advantage.

Around the same time, Zhang teamed up with Jun Li of Tsinghua University; Jingyue (Jimmy) Liu, now at Arizona State University; and others to develop a wet-chemistry method that yields nanocrystallites of iron oxide dotted with isolated platinum atoms. The group relied on simple aqueous chemistry, tweaking the temperature, pH, and other parameters to tailor a coprecipitation process to produce the catalysts. Atomic-resolution electron microscopy confirmed the presence of isolated Pt atoms.

The chemists tested the Pt-FeOx assemblies in various CO-oxidation conditions, including ones similar to those used to clean up vehicle emissions and others that scrub residual CO from hydrogen, as required for fuel-cell usage.

The team found that compared with other platinum catalysts, and with a gold reference catalyst, the single-atom catalysts were at least two to three times as active and they remained stable under reaction conditions (Nat. Chem. 2011, DOI: 10.1038/nchem.1095).

After those seminal studies, researchers shifted into high gear. They started reporting greater variety and complexity in the catalysts and chemical reactions being examined and in the methods used for making and probing the catalytic materials.

[+]Enlarge
Credit: Abhaya Datye/U of New Mexico
When exposed to high temperature in air, platinum desorbs from Pt nanocrystals as PtO2 (gray and red) and can be trapped on CeO2 (gold and red). 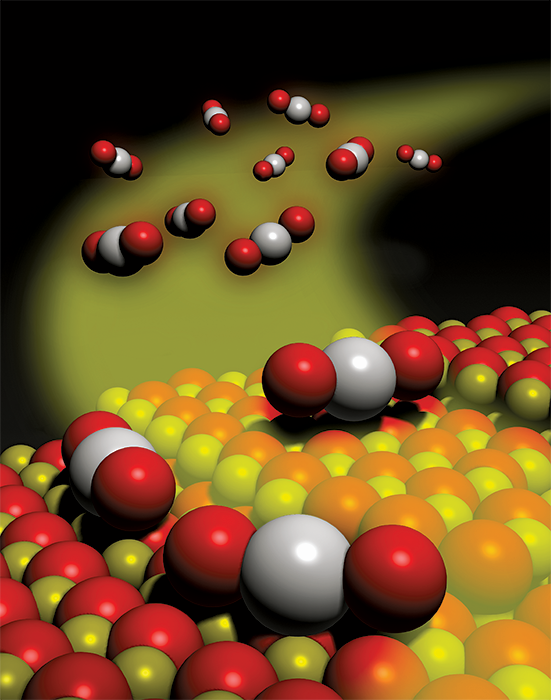 Credit: Abhaya Datye/U of New Mexico
When exposed to high temperature in air, platinum desorbs from Pt nanocrystals as PtO2 (gray and red) and can be trapped on CeO2 (gold and red).

Exposing Pt nanoparticles to hot oxidizing conditions causes the metal to form volatile PtO2, which desorbs from the nanoparticles—a step that normally leads to their demise. Datye instead exploited this mobile supply of Pt atoms, trapping them on a ceria surface and thereby making a stable, active oxidation catalyst. The team showed that the Pt-ceria catalysts were effective at converting CO to CO2—a key reaction in engine emissions cleanup—and that the Pt atoms remained isolated during the reaction (Science 2016, DOI: 10.1126/science.aaf8800).

But single-atom catalysts haven’t exclusively involved noble metals. In the larger catalysis field, there has been a push to make catalysts that are free from costly noble metals. Instead, scientists have designed nanoparticles that combine carbon, nitrogen, and an abundant metal such iron or cobalt. These systems can catalyze oxidations, hydrogenations, and other reactions of organic compounds. But progress has been slow, in part, because detailed knowledge of the active sites in these catalysts remains elusive.

So Zhang and coworkers developed a synthesis method for making single-metal-atom versions of Co-N-C catalysts. The method calls for depositing a precursor cobalt compound on a solid support, ramping up the temperature, and then treating the product with nitric acid to remove the support.

On the basis of electron microscopy, various X-ray methods, and other techniques, the researchers determined that the method prepared a material consisting of graphitelike layers in which individual cobalt atoms were bonded to four pyridinic nitrogen atoms. Each cobalt atom was capped above and below the graphite layer with weakly bonded dioxygen molecules.

There was a lot of debate then about whether a single atom could serve as the active site in a heterogeneous catalyst. ... There’s no argument now.
Tao Zhang, director, China’s Dalian Institute of Chemical Physics

The group found that the unusual complex actively and selectively catalyzes hydrogenative coupling of nitroarenes to form aromatic azo compounds (Chem. Sci. 2016, DOI: 10.1039/c6sc02105k). Such reactions are used for making dyes and pharmaceuticals. Armed with a clear picture of the active site, researchers are now using the information to search for better performing variations of this catalyst.

Researchers are also improving methods for computational analysis of single-atom catalysis. Albert Bruix Fusté of Aarhus University and Konstantin M. Neyman of the University of Barcelona and coworkers used quantum mechanical methods to evaluate the energetics of 11 types of metals dispersed as single atoms on the (100) faces of CeO2 nanocrystals.

The results indicate that Pt, Pd, Ni, Fe, Co, and Os atoms bind much more strongly to the oxide surface than to other atoms of the same type in a corresponding nanoparticle. The upshot is that these metals are good candidates for making single-atom catalysts because they have a good reason, energetically speaking, to stay in place and remain isolated (Catal. Sci. Technol. 2016, DOI: 10.1039/c6cy00294c).

The rapid progress that led to the current state of single-atom catalysis prompts Sir John Meurig Thomas of the University of Cambridge to declare “the future looks bright.” In a recent commentary in Nature, he remarked that preparing new types of single-atom catalysts is likely to be straightforward and characterizing them is becoming easier because of the advent of powerful analytical techniques such as atomic resolution electron microscopy.

Just a few years ago, the idea that a supported metal catalyst could work its chemistry through the actions of a single atom sounded far-fetched. Now, researchers are starting to discuss the feasibility of making these catalysts in bulk. What a difference a few years make.