Based on work by California-based researchers, a picture is beginning to emerge showing that fog droplets carry the neurotoxin from the ocean to terrestrial ecosystems 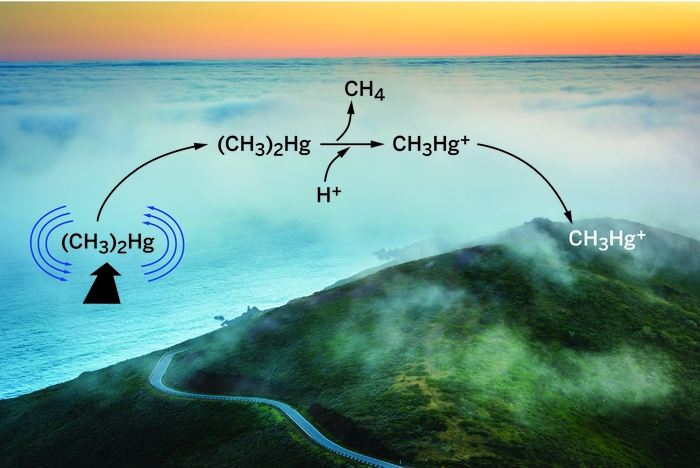 Credit: Shutterstock/C&EN
Ocean eddies bring (CH3)2Hg from deep water to the surface, where the (CH3)2Hg evaporates. Acidic fog or aerosol particles in the atmosphere demethylate (CH3)2Hg to form CH3Hg+, which is then deposited on coastal land.

You might think of fog as something gray and damp, good only for ruining views, making driving harder, and delaying plane flights—especially in San Francisco. But fog also provides as much as 90% of the water in some coastal ecosystems, such as California’s chaparral shrublands and redwood forests.

Last month during the American Geophysical Union fall meeting, researchers reported another characteristic of fog: It may play an important role in cycling neurotoxic mercury species among those coastal ecosystems, the water, and the air.

“It changes the way we think about fog,” said Kenneth Coale, a professor of chemical oceanography at Moss Landing Marine Laboratories, which is part of the California State University system. “We’re finding that it’s sweeping over the ocean surface like a mop that’s then wrung out over the coastal watershed, depositing compounds that it soaks up off the ocean.”

Coale’s research on fog is part of FogNet, a collaboration among California-based researchers who are led by Peter Weiss-Penzias, an atmospheric chemist at the University of California, Santa Cruz. FogNet scientists study so-called advective fog—the kind that forms when warm, moist air blows across the cooler Pacific Ocean and then moves overland in California.

The main goal of the project is to understand the role that fog plays in mercury transport. FogNet researchers launched the project after finding that fog droplets contain more mercury than expected. The team collects samples of fog water from seven land sites and has also done several research cruises in the Pacific Ocean.

The picture that is emerging from the FogNet studies indicates that fog transfers mercury in significant quantities from the ocean to coastal land. The process starts when inorganic mercury enters the ocean, either through natural processes or via pollution released from sources such as coal-burning power plants. That mercury gets processed by microbes living in the water into neurotoxic, water-soluble monomethylmercury, CH3Hg+, and enters the marine food web.

Some of the mercury also gets transformed into dimethylmercury, (CH3)2Hg, which is relatively stable in deep water. But that deep water can emerge at the ocean surface when current eddies spin counterclockwise, pushing surface water out radially and allowing water to rise up from beneath.

When the water emerges from below, the dimethylmercury evaporates into the air. At that point, it encounters fog droplets or marine aerosol particles acidified by sulfuric acid. The sulfuric acid is produced by atmospheric oxidation of organosulfur compounds also released from the ocean. Coale and colleagues suspect that the acidic environment converts dimethylmercury back to toxic monomethylmercury.

The specifics of the atmospheric chemistry are uncertain, Coale emphasized. He and colleagues have observed conversion of dimethylmercury to monomethylmercury in acidified seawater. Other researchers have also documented demethylation in acidic environments. “We’re working with atmospheric chemists to try to design experiments that we can do in the vapor phase that would help confirm this hypothesis,” Coale said.

What the scientists do know for certain is that fog water droplets contain relatively high amounts of monomethylmercury, 3.4 ng/L, compared with the 0.1 ng/L that’s typically seen in raindrops (Geophys. Res. Lett. 2012, DOI: 10.1029/2011gl050324). “We found that fog is a more efficient absorber of water-soluble marine emissions than rainwater,” Weiss-Penzias said. “Rainwater forms higher in the atmosphere and has less of a connection with the ocean surface.”

When the fog gets blown overland, it then deposits its monomethylmercury-laden water droplets. If the water from the fog evaporates, particulate matter that had seeded the fog can still deposit the monomethylmercury. The amounts of mercury involved aren’t dangerous to humans, but they may be to animals or plants that live on the coast.

The same bioaccumulation of mercury that happens in marine food chains—small amounts of mercury in phytoplankton eventually turn into harmful levels in tuna—can also happen in terrestrial ecosystems. Weiss-Penzias and colleagues, for example, have documented monomethylmercury concentrations of about 80 to 1,250 ng/g of body weight in carnivorous wolf spiders living on the California coast (Bull. Environ. Contam. Toxicol. 2014, DOI: 10.1007/s00128-014-1448-6). For comparison, the Environmental Protection Agency says that humans may safely consume 0.1 ng/g body weight daily.

Although humans are unlikely to consume a concerning number of spiders, insects harboring monomethylmercury are a concern for birds, lizards, or rodents, and in turn, their predators. Likewise, plants that absorb fog water may also build up methylmercury and transfer it to herbivorous species.

“There’s more and more evidence that birds and fish-eating mammals like otters are potentially exposed to monomethyl­mercury from marine ecosystems,” commented Robert Mason, a professor of marine sciences at the University of Connecticut. On the terrestrial side, “we know that rain or snow also brings monomethylmercury in the atmosphere back to Earth. Fog is another possible mechanism that in a particular environment could be as important a contributor as rain.”