MIND READER
[+]Enlarge
Credit: U. Illinois/Wash. Univ.
An implanted pressure sensor (shown enlarged for detail) rests in or on the brain and is connected to a small wireless transmitter, which can reside just above or just below the skin. 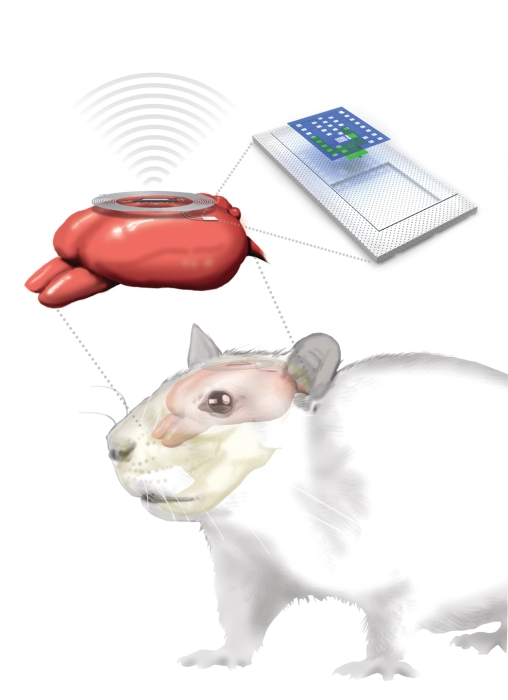 Credit: U. Illinois/Wash. Univ.
An implanted pressure sensor (shown enlarged for detail) rests in or on the brain and is connected to a small wireless transmitter, which can reside just above or just below the skin.

A 30-member research team that includes chemists, engineers, and medical doctors has unveiled implantable wireless sensors that biodegrade within the body (Nature 2016, DOI: 10.1038/nature16492). Such sensors could help doctors better monitor brain pressure, which is critical during care for severe head trauma caused by gunshots, car crashes, and other injuries, the team says.

A LOAD OFF MY MIND
[+]Enlarge
Credit: Nature
The new brain pressure sensors degrade into nontoxic components over the course of hours or days.

Credit: Nature
The new brain pressure sensors degrade into nontoxic components over the course of hours or days.

Doctors can already monitor brain pressure with implantable sensors that don’t degrade, but the new devices, which disappear after several days, offer several advantages, says team member Rory Murphy of Washington University School of Medicine. “Because they dissolve, we don’t have to go back in and get them,” he explains. “Nobody wants a second surgery.”

Two new sensor platforms—developed by John A. Rogers and his team at the University of Illinois, Urbana-Champaign—could alleviate these concerns. The team demonstrated the potential of these devices by implanting the sensors in and on the brains of rats.

The first platform uses extremely thin molybdenum wires to connect a completely degradable sensor to a small wireless transmitter on top of a rodent’s head. “Unlike anything that exists today, this electronic system completely breaks down into biocompatible materials,” Rogers says of the sensor implanted inside a rodent’s intercranial space.

The second platform is completely implantable, but only 85% degradable, Rogers says. The sensing elements still dissolve, but some circuitry for wireless data transmission remains.

Still, Rogers adds, the permanent components are small enough that this design would likely be a viable approach for human patients, even as the group works toward a device that is entirely implantable and biodegradable.

Both platforms rely on sensors with layered architectures, starting with a thin, flexible substrate, such as porous silicon. The team coats the substrate with a layer of poly(lactic-co-glycolic acid), a biodegradable polymer, to trap an air pocket in the device. The polymer acts like a drumhead and moves in response to changes in the pressure of the fluid surrounding the brain

The next layer is made from a silicon nanomembrane. When the drumhead polymer moves, it strains the membrane and changes its electrical resistance, allowing the team to convert pressure fluctuations into electronic read-outs.

Finally, the entire assembly is encased within poly(lactic-co-glycolic acid). The thickness of this coating determines how long the device will last in the rodent before dissolving, a timespan ranging from hours to days. The team adds that the sensors could be modified to measure different quantities, such as temperature, and implanted in different parts of the body.

These devices are impressive, says Zhenan Bao, whose team is developing wireless and biodegrable medical sensors at Stanford University. “With more materials and device fabrication developments, I believe there will be more and more such electronics devices available in the next few years,” she says.

Rogers agrees that advanced materials will move the field forward. “This is all driven by new materials and chemistry,” he says.