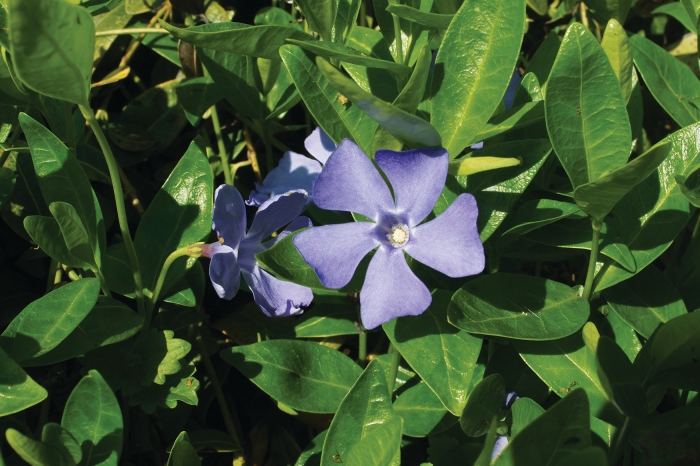 Credit: Shutterstock
Vinpocetine is chemically synthesized from vincamine, an alkaloid isolated from the leaves of the Vinca minor plant, shown here.

It enhances athletic performance. It boosts memory. It helps weight loss. These are claims from companies marketing dietary supplements containing vinpocetine, a semisynthetic chemical derived from the lesser periwinkle plant.

The substance has been sold to U.S. consumers for nearly 20 years as a dietary supplement. But in Germany, Russia, and China, it is considered a pharmaceutical available by prescription to treat stroke and cognitive impairment.

To the surprise of the supplements industry, the U.S. Food & Drug Administration is now proposing to change the status of vinpocetine to a drug. That means manufacturers will have to demonstrate safety and efficacy before they can market products that contain the chemical. Plus, they will have to ensure that accurate dosages are included on product labels.

Critics of the supplements industry argue that such a change is needed because companies are bypassing FDA safety and efficacy reviews and selling pharmaceutical ingredients directly to U.S. consumers as dietary supplements.

The natural products industry is shocked by FDA’s tentative decision. Companies claim that removal of vinpocetine from dietary supplements will be a huge cost for manufacturers resulting in little public health benefit. It will also set a precedent for FDA to scrutinize other new dietary ingredients found in supplements, they say.

Dietary supplement use is strong in the U.S.

▸ 52% of U.S. adults report using dietary supplements within the past 30 daysa

▸ 31% of U.S. adults report using multivitamin/mineral supplements within the past 30 daysa

▸ 55,600 dietary supplements are estimated to be available in the U.S.

▸ A “dietary supplement” is “a product intended for ingestion that contains a ‘dietary ingredient’ intended to add further nutritional value to (supplement) the diet.”

▸ A “dietary ingredient” may be one, or any combination, of

▸ an herb or other botanical product;

▸ a substance to supplement the diet by increasing the total dietary intake; or

The debate began in September when the FDA tentatively concluded that vinpocetine is not a dietary ingredient. If the agency finalizes that decision, vinpocetine will no longer be allowed in supplements and FDA will regulate the chemical as a drug.

FDA claims that vinpocetine does not fit any of its categories for dietary ingredients. The compound is not a vitamin, mineral, amino acid, or botanical substance.

Nor is it a concentrate, metabolite, constituent, or extract, the agency says. The chemical has never been identified in a plant. It is chemically synthesized from vincamine, an alkaloid extracted from the leaves of the lesser periwinkle (Vinca minor).

Six of the samples contained no vinpocetine at all, and 17 had levels ranging from 0.3 to 32 mg, the researchers noted. Vinpocetine is prescribed as a pharmaceutical in some countries at dosages from 5 to 40 mg.

“We found that only 6 of the 23 supplement labels (26%) provided consumers with accurate dosages of vinpocetine,” Cohen writes in a letter to the editor, published last year in Mayo Clinic Proceedings (DOI: 10.1016/j.mayocp.2015.07.008).

Studies investigating the neuroprotective benefits of vinpocetine have shown mixed results, Cohen points out. Some studies show benefits; some do not. Others suggest the substance can lead to negative health effects, including flushing, headaches, and low blood pressure.

In response to the study by Cohen and colleagues, Sen. Claire McCaskill (D-Mo.), the top Democrat on the Senate Special Committee on Aging, started urging FDA to suspend sales of vinpocetine supplements. In 2015, she also asked 10 retailers to voluntarily stop selling vinpocetine products.

“The way we regulate these supplements isn’t working—and it’s putting the lives and well-being of consumers at risk,” McCaskill said at that time. “We’ve seen products with false labels, tainted ingredients, wildly illegal claims, and, now, products containing synthesized ingredients that are classified as prescription drugs in other countries.”

The lawmaker’s request did little, however, to sway the supplements industry. Now, one year later, hundreds of dietary supplement products that claim to contain vinpocetine are still widely available in the U.S.

Makers of vinpocetine are stressing the immensity of the market as FDA considers regulatory action. The Natural Products Association (NPA), an industry group, is urging FDA to conduct an economic impact analysis before making a final decision.

Dietary supplement companies have been lawfully marketing vinpocetine since the 1990s, notes Daniel Fabricant, chief executive officer of NPA. “It would appear that removal of this ingredient would bear little incremental public health effect,” he says, “but a significant incremental cost associated with the change in regulatory status.”

FDA has cleared vinpocetine five times as a new dietary ingredient, with the first instance occurring in 1997. In each case, the agency raised no concerns over the ingredient or the safety data provided by manufacturers. Changing the regulatory status of vinpocetine nearly 20 years later “sets a very bad precedent,” Fabricant says. FDA’s proposal for vinpocetine has “major implications” for dietary ingredients that are being sold in supplements, he says.

FDA says it will “remove from the market products that contain potentially harmful pharmaceutical agents, are otherwise dangerous to consumers, or are falsely labeled as dietary supplements.” The agency also says that it will “enforce the dietary supplement Good Manufacturing Practices regulation and take action against claims that present a risk of harm to consumers (such as egregious claims of benefit in treating serious diseases) or economic fraud.”

“Notification of new dietary ingredients is the only premarket opportunity the agency has to identify unsafe supplements before they are available to consumers,” says Steven Tave, acting director of FDA’s Office of Dietary Supplement Programs. “The revised draft guidance is intended to improve the quality of industry’s new dietary ingredient reporting so FDA can more effectively monitor the safety of dietary supplements.”

The supplements industry is worried that regulators will soon begin scrutinizing all new dietary ingrdients.

“FDA appears to be attempting to shift the burden of demonstrating reasonable expectation of safety for vinpocetine on the industry by using the hook that it can’t qualify as a dietary ingredient,” Fabricant says. “Is this what responsible industry can expect in the future with other new dietary ingredients?” he asks.

More than half of U.S. adults take dietary supplements, according to a study published earlier this month in the Journal of the American Medical Association (DOI: 10.1001/jama.2016.14403). “Consumers are demanding products that complement their individual health needs, and that’s why a majority of Americans continue to trust and use dietary supplements safely on a daily basis,” Fabricant says. “Addressing consumer confidence and safety is an area that our industry cannot afford to compromise.”

But critics of the dietary supplements industry say FDA needs to do more to ensure the safety and efficacy of such products. “For the majority of adults, supplements likely provide little, if any, benefit,” Cohen writes in an editorial accompanying the study in JAMA (2016, DOI: 10.1001/jama.2016.14252).

Cohen believes FDA could start improving the situation by finalizing its proposed conclusion about vinpocetine. “This will send a very important signal throughout the industry and to consumers,” he writes in comments submitted to FDA.

Sales of dietary supplements should “not provide a back door to introducing new drugs directly to consumers without FDA approval,” Cohen adds.

FDA is accepting comments from the public about its decision to change the regulatory status of vinpocetine until Nov. 7.

Drug Discovery
A small molecule in the gut could explain bariatric surgery’s anti-diabetic effects
Vaccines
What will it take to make an effective vaccine for COVID-19?
Oncology
AstraZeneca licenses another Daiichi cancer drug
Share X
To send an e-mail to multiple recipients, separate e-mail addresses with a comma, semicolon, or both.
Title: Vinpocetine: drug or dietary supplement?
Author: Britt E. Erickson
Chemical & Engineering News will not share your email address with any other person or company.