[+]Enlarge
Credit: Amina Bouslimani & Neha Garg
Chemicals on the surface of a cell phone can reveal much about its owner. 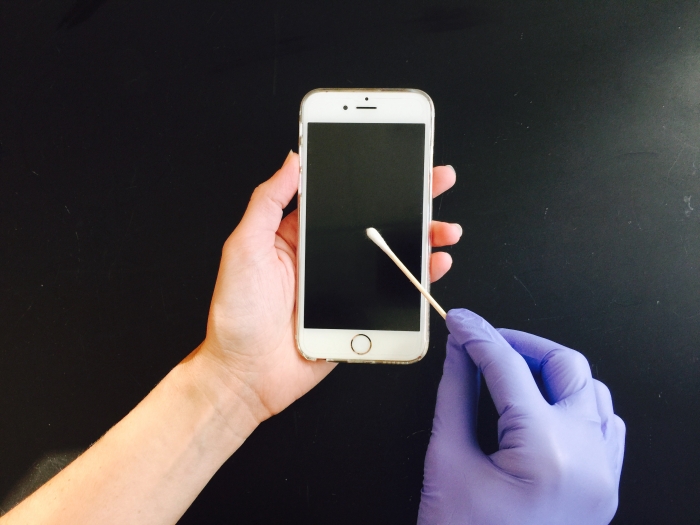 Credit: Amina Bouslimani & Neha Garg
Chemicals on the surface of a cell phone can reveal much about its owner.

People leave chemical traces wherever they go, especially when they touch or handle objects. Those chemicals can come from a variety of sources, including personal care products, food, or medications. A chemical analysis of those traces can be used to draw a “lifestyle sketch” of the person who left them behind.

A team led by Pieter C. Dorrestein and Amina Bouslimani of the University of California, San Diego, has shown they can use such analyses to match up cell phones and their owners after taking swab samples from the phones and the owners’ hands (Proc. Natl. Acad. Sci. USA 2016, DOI: 10.1073/pnas.1610019113). They envision that their approach could help assemble profiles of suspects in criminal investigations, among other things.

“We thought, ‘Let’s see if these chemicals can be transferred to objects that we use daily, such as phones, keys, computers, or wallets,’ ” Bouslimani says. “We chose phones first because these are personal objects that we use every day, several times a day.”

With a combination of mass spectrometry and informatics methods, the researchers analyzed eight hand samples and four phone samples from 39 volunteers to generate personalized profiles. Those profiles included compounds such as medications and their metabolites. In some cases, they found compounds, such as the insect repellent DEET, that the individuals reportedly hadn’t used in months.

“There is great value in using personal objects such as cell phones to detect any personal lifestyle information about the person associated with the object,” says José R. Almirall, director of the International Forensic Research Institute at Florida International University. Almirall notes that the methods need to be validated and standardized, however, before they could be used in forensic analyses.

“It is incorrect to think of the approach as an identification method at this time—it is a profiling method,” Dorrestein says. “What we can do is look at each individual molecule and say what the lifestyle of that person looks like. This is important when investigators do not have evidence such as DNA or fingerprint matches as leads to go on.”