Investigation Of Ammonium Nitrate Blast In Texas Is Closed 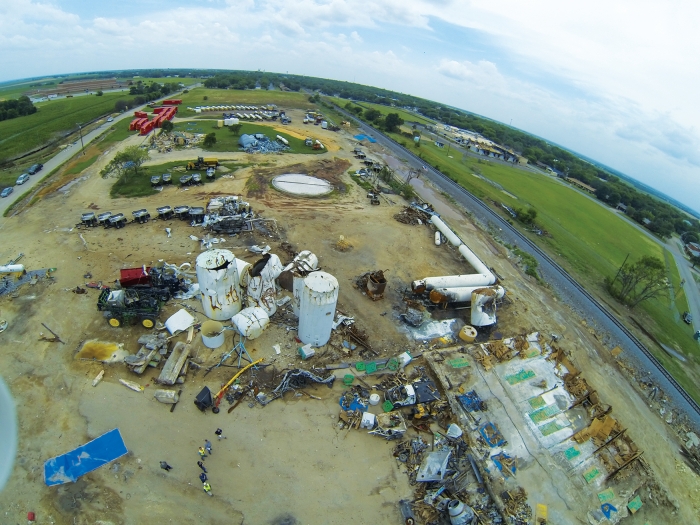 Credit: Mark Wingard/CSB
Little remains of the West Fertilizer Co. retail store and warehouse after an ammonium nitrate explosion in 2013.

The U.S. Chemical Safety Board late last month closed the books on what CSB Chair Vanessa Allen Sutherland called “one of the most destructive explosions it has ever investigated.” The West Fertilizer Co., a retail farm supply warehouse in West, Texas, caught fire and blew up nearly three years ago. Fifteen people were killed, 260 were injured, and much of the small rural town of 2,800 was flattened. Twelve of the dead were emergency responders unprepared for an accident of such magnitude, CSB said.

Over the years, ammonium nitrate fertilizer explosions have continued in the U.S. with disturbing regularity. In its 262-page staff report on the West accident, which was approved by the board at a community meeting in Texas, CSB cited 32 similar incidents going back to 1916. Collectively, the accidents killed 1,477 people.

Without improvements in federa, state, and local safety regulations, emergency response training and action, and land-use planning, Sutherland warned that other West-like accidents could erupt.

“Our report found that limited regulatory oversight, poor hazard awareness, inadequate emergency planning, and the facility’s proximity to nearby homes, schools, and other buildings all led to the incident’s severity,” Sutherland said. “The proposed safety recommendations address steps needed to help prevent a similar tragedy in the future.”

The accident in West occurred just before 8 PM, 20 minutes after a fire was reported and as volunteer firefighters were setting up water hoses and slowly entering the warehouse. They faced 15-meter-high flames and were trying to determine whether they should save the structure or let it burn. They were unaware that ammonium nitrate has the potential to explode under certain conditions.

The explosion damaged more than 150 buildings tens of meters away, including three schools, a nursing home, and apartment building. It completely destroyed the warehouse, which was owned by Adair Grain Inc. Fortunately, the accident occurred when nearby schools were closed or the death toll would have been much higher, CSB said.

After the explosion, Adair Grain filed for bankruptcy. The facility was insured for $1 million. CSB estimates the total insurance-related losses in West to be around $230 million and federal disaster assistance exceeded $16 million.

CSB made similar recommendations in 2002, suggesting that the two agencies add a class of reactive chemicals, including ammonium nitrate, to their regulations. EPA and OSHA have not done so.

The board noted that after the West accident, President Barack Obama called for an examination of new approaches to toughen industrial safety regulations. However, that federal effort has stalled and so far has not moved beyond issuing guidance and advisory documents. It is unlikely to lead to formal regulatory proposals as Obama’s Administration winds to a close.

CSB urged new facilities to use noncombustible construction materials and fire suppression systems and recommended new emergency responder training. The board also said it intends to conduct a national investigation of land-use planning decisions near industrial areas. However, Sutherland said, that study has yet to get under way.