Materials: Will calcium knock lithium off its perch?

CALCIUM RECHARGE
[+]Enlarge
Credit: Chem. Mater.
Calcium ions can flow into and out of a cathode made of manganese hexacyanoferrate in a rechargeable calcium-ion battery. 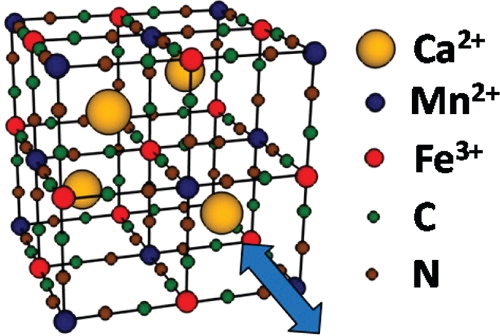 Credit: Chem. Mater.
Calcium ions can flow into and out of a cathode made of manganese hexacyanoferrate in a rechargeable calcium-ion battery.

Renewable energy and electric cars are driving demand for batteries with denser energy storage than standard lithium-ion batteries. Ions that can carry more than one charge, such as calcium and magnesium, could pack more energy into a volume of material than lithium—plus they’re cheap and abundant. Now researchers have built a rechargeable battery using calcium as the active element (Chem. Mater. 2015, DOI:10.1021/acs.chemmater.5b04027).

It could take several years to create a calcium-ion battery suitable for use in cars or cell phones, says Brian J. Ingram, a materials scientist at Argonne National Laboratory, but the proof-of-concept study suggests a calcium battery is a viable technology.

The electrodes in rechargeable batteries have spaces for ions in the electrolyte to move through. As the battery charges and discharges, the ions flow between the anode and cathode, and intercalate themselves into the layers or crystal lattices of the electrode materials. One challenge in developing a calcium-ion battery has been to find a cathode material that can accommodate the flow of calcium ions. The iron ferrocyanide compound Prussian blue has shown promise for accepting a wide range of ions. So far, however, it has only worked when the accompanying electrolyte solutions have had high concentrations of water, which can react with calcium and reduce the battery voltage.

In the new work, Ingram and his colleagues built a battery with a cathode made out of manganese hexacyanoferrate, a compound related to Prussian blue; and an anode made of tin. They linked them using a dry, nonaqueous electrolyte based on calcium hexafluorophosphate.

The researchers cycled their battery, discharging and charging it while monitoring it with X-ray spectroscopy and diffraction. The X-ray spectroscopy showed the calcium ions were increasing the oxidation state of the manganese in the cathode, indicating ions were indeed attaching to sites in the manganese hexacyanoferrate. Diffraction studies showed the cathode alternately swelling and shrinking, as would be expected if calcium were flowing in and out with battery cycling. “We have a full cell that stored energy, released it, and cycled it,” says study coauthor Albert L. Lipson, a postdoctoral researcher at Argonne.

The study did not, however, show that the manganese was changing by two oxidation states during the cycling and therefore transferring two electrons to and from the Ca2+, Lipson says. The next step will be to develop a cathode material that can take up both charges.

The battery would have a higher capacity if the anode could be made out of calcium metal instead of using calcium ions in the electrolyte, but so far no one has developed an electrolyte that can remove and redeposit calcium on the anode with high enough efficiency.

Marca M. Doeff of the Lawrence Berkeley National Laboratory says this is the first time anyone has shown that calcium can be intercalated into a cathode. She agrees that, in theory, batteries using calcium or magnesium could store more energy than lithium-ion devices. “In reality, there are many challenges and it is likely that we won’t see real devices for a long time,” she says.

You Song (January 13, 2016 8:32 PM)
Very interesting. My research is about the magnetic properties of cyanides such as Prussian Blue, but we never thought about its application in battery. This idea is very nice.
Reply »

Steven Warren (January 15, 2016 3:42 PM)
Three ideas immediately come to mind:
1. What about organic ionic liquids as the electrolytes?
2. What about carbon nanotubes with calcium metal in the center?
3. What about functionalized graphene sheets in a sandwich arrangement with calcium filling?

"Marca M. Doeff of the Lawrence Berkeley National Laboratory says this is the first time anyone has shown that calcium can be intercalated into a cathode."

This is not quite right. Here's an earlier paper cited by the paper being discussed in the article: http://www.sciencedirect.com/science/article/pii/S0378775314015122
Reply »