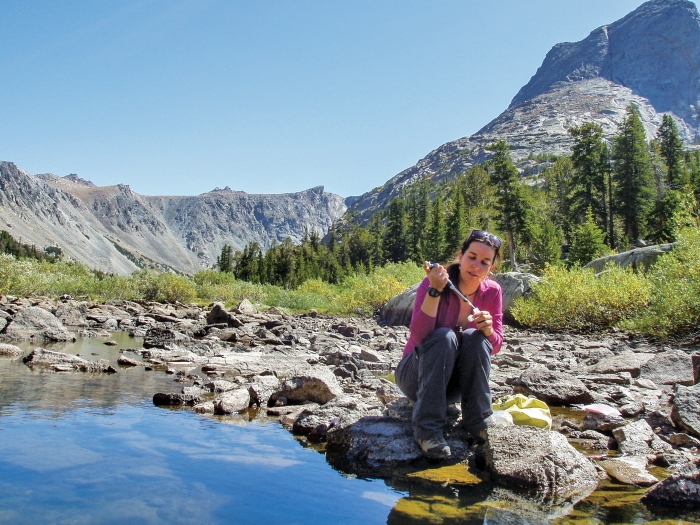 A new study reveals that an unknown continental-scale process is dumping phosphorus into streams and lakes across the U.S. (Environ. Sci. Technol. 2016, DOI: 10.1021/acs.est.5b05950). Rising phosphorus measured in these water bodies could lead to toxic algal blooms and degraded habitat for fish, birds and frogs.

High phosphorus levels in streams and lakes typically result from sewage discharge and agricultural runoff. But the new work finds phosphorus pollution in remote areas far from such sources, leaving researchers scratching their heads about where it came from. What evidence they have suggests the phosphorus inputs are probably linked to climate change, and are unlikely to be tamed anytime soon.

Phosphorus is an essential nutrient. But when levels top 10 µg/L in water bodies, ecosystems start to change. The kinds of algae that feed a healthy ecosystem begin to disappear, and undesirable species take over, says Emily H. Stanley, an aquatic biogeochemist at the University of Wisconsin, Madison, who was not part of the study. One group of undesirables, cyanobacteria, can produce toxic blooms that threaten drinking water sources and cost the U.S. economy over $2.2 billion per year.

To track the health of the nation’s waters, the Environmental Protection Agency monitors a selection of lakes and streams, measuring the concentration of important ions and nutrients every five years.

EPA stumbled on the new result while analyzing these data, says John L. Stoddard, a biogeochemist with the EPA. Phosphorus was the only measured nutrient that changed, he says. Uniformly across the country, median total phosphorus in streams more than doubled from 26 µg/L to 56 µg/L over the last 10 years. In lakes, levels rose from 20 µg/L in 2007 to 37 µg/L in 2012.

The researchers used national data on land cover to determine whether the landscape at each sampling site was urban, farmed, or wild. Stoddard also estimated rainwater runoff at the remote sites based on U.S. Geological Survey records.

Wastewater and farm runoff are not to blame, Stoddard says. These sources carry excess nitrogen along with phosphorus, but nitrogen levels did not rise at the sampled sites. And the largest phosphorus increases were in remote areas far from sewage plants and big agriculture.

“Because the phosphorus increases were continental in scale, there are two major processes that might be responsible,” Stanley says. Big storms, which have increased in the last 20 years, can wash soil particles rich in phosphorus into streams and lakes, she says. Although the researchers did not find evidence of large-scale increases in runoff, Stoddard cautions that their data sources may not be fine-grained enough to capture an increase in episodic high-runoff events.

Atmospheric deposition of phosphorus is the remaining explanation, Stanley says. “Phosphorus sticks to soil and clay particles in dust and gets blown around by wind.” In studies focused on the western U.S. and Spain, researchers have measured increased dust deposition in water bodies and linked it to higher phosphorus concentrations and increased algal biomass. Other research suggests that atmospheric deposition of phosphorus is on the rise largely due to increased dust and emissions from burning biomass, Stoddard says.

Unfortunately, dust deposition and extreme precipitation are not directly controllable, and increases in both are linked to climate change, Stoddard says, so it will be difficult to stop the trend. “This is a surprising and provocative result that we wouldn’t have seen if EPA hadn’t been doing routine monitoring,” Stanley says.

Comments
John L. Cox (March 30, 2016 9:21 PM)
I've felt for some time that the amount of monitoring by EPA (required and otherwise) is insufficient. Not of sufficient sensitivity, not covering enough analytes, and not covering media (air, land, water)in sufficient area detail. After all, if you don't measure how are you to know.
Reply »

Garrett Luce (March 31, 2016 8:32 AM)
I wonder if consideration was given to the remarkable advances in analytical methods in the last 10 years and computing power that allows incredibly detailed geological and hydrological data analysis? I wouldn't presume to say that the article is wrong as the increase in phosphorus levels, but I do wonder what role our modern ability to detect micronutrients could play in the magnitude of effects.
Reply »

john j skiffington (March 31, 2016 11:12 AM)
several years ago I had noticed large deposits of exotic insects that had been deposited upon mount kahtadin in maine's baxter state park' also perceived large cloud masses that pass over the small mountain range to produce types of precipitation atop the surface. that would also include chemicals, particulates, compounds and bio-agents and the relevant phosphorus and its compounds.
Reply »

Greg Patterson (April 4, 2016 7:07 AM)
I vacation in an area that is very remote and no where near urban areas that would contribute sewage discharge or Agriculture runoff. In the year of the large bloom in Lake Erie I also noticed an algae bloom in this area twice that year that I have never seen before. I have however and always see foaming in streams and marshes that I always assumed was from phosphorus. This area is a large marsh area just off Georgian Bay where I hunt Moose. Moose live in marsh areas, and because of the protected beaver population that seems to be growing so is the marsh lands. We have had an increased movement towards establishment of wetlands in many areas that would also contribute to more ground water phosphorus. Question is how much phosphorus is contributed by marshes and wetlands.
Reply »

Greg Patterson (April 4, 2016 7:11 AM)
Just for the record as an addition to my previous question the part of Lake Erie that exhibited that algae bloom is a large marsh.
Reply »

Robert Pellenbarg (April 8, 2016 5:27 PM)
Note that many of the lakes under investigation are surrounded by granite, which contains the phosphate mineral apatite. With more carbon dioxide in the atmosphere (carbonic acid), and higher temperatures, perhaps apatite is weathering more rapidly now, releasing phosphate as a result.
Reply »

George Neville (April 15, 2016 8:00 PM)
Throughout the report, mention is made (or implied) of total phosphorus(P) content in various water samples without reference to the analytical methodology used. It's one thing to report total P content for overall burden, but detection and analysis for specific entities of bound phosphorus, e.g. phosphate, phosphite, and/or phosphonate as in glyphosate is necessary to better determine the source of the pollution. Aerial spraying of electric-transmission line right-of-ways with glyphosate has been used for some years to defoliate surface vegetation leading to eventual herbicidal runoff.
Reply »

Gerry Stephenson (April 16, 2016 10:59 PM)
Phosphorus can be a by product of fertilizer manufacture, and also steel mills. Investigation should include all manufacturers that efflue into the Great Lakes.
Reply »